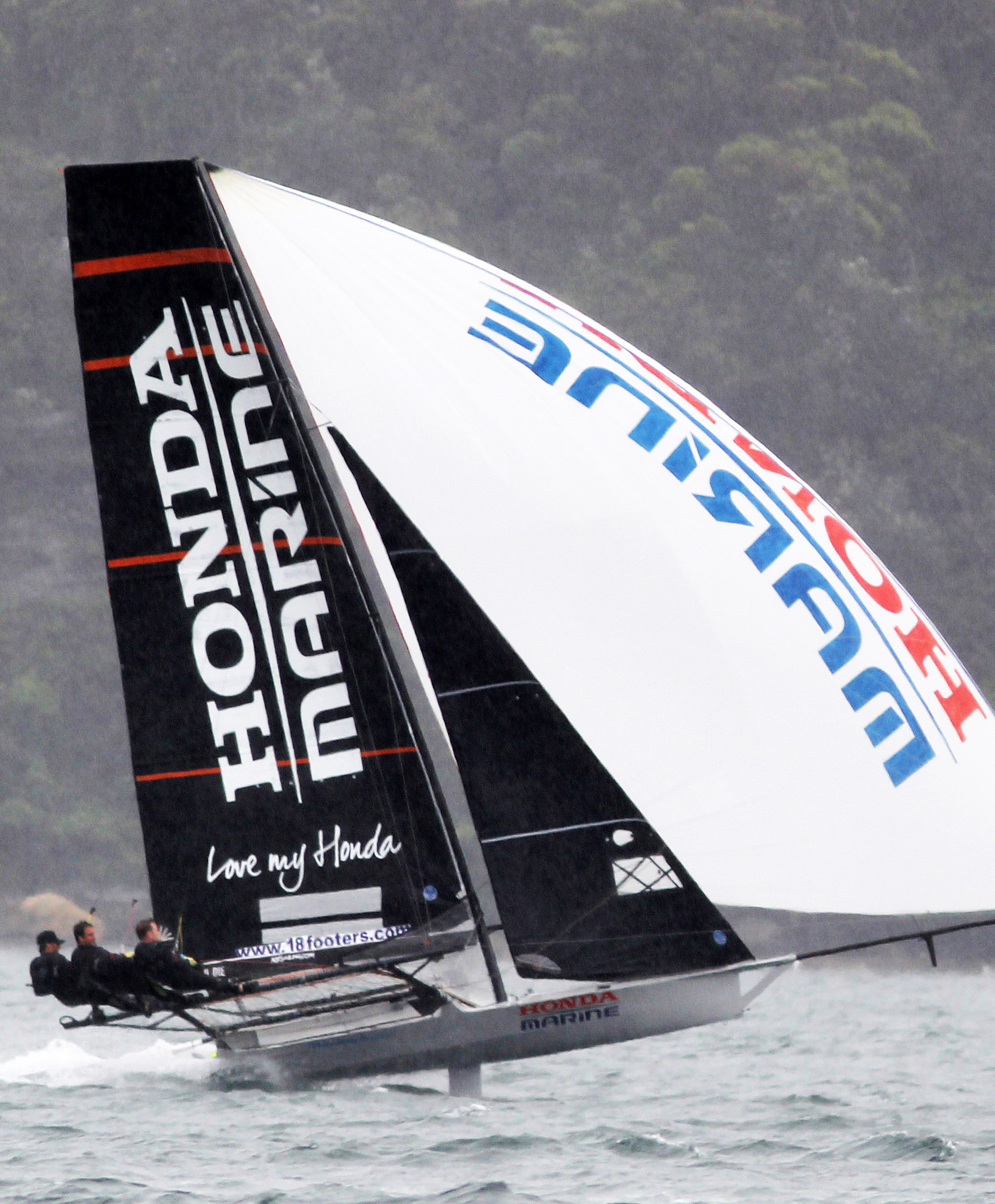 The defending champion Honda Marine team of David McDiarmid, Matt Steven and Brad Collins began their attempt to win a third consecutive JJ Giltinan Championship when they scored a come-from-behind win in Race 1 on Sydney Harbour on Saturday.

It wasn't until the seventh leg of the nine- leg course that Honda Marine finally reached the lead then went on to score a 39 second victory over Shaw & Partners Financial Services (James Dorron/Harry Bethwaite/Tim Westwood), which had led for most of the first half of the course.

Winning Group (Seve Jarvin) struggled a touch with a reefed mainsail, as the expected the strong southerly to fade during the race. But the still managed to finish fourth, ahead of Smeg (Micah Lane), URM (Marcus Ashley-Jones) and Finport Finance (Keagan York).

Vintec (Kirk Mitchell) continued to show a big improvement over the skiff's early season form and finished eighth ahead of Noakes Blue (Yvette Heritage) which sailed a great race throughout the long course.

The predicted 26-28-knot southerly early in the day caused concern between sailors as to whether the race would go ahead. However, when the race got underway, there was no sign of big winds, which eased after the rain arrived. By race-end the wind had faded even more and was extremely light.

Visibility was a problem for spectators, but the downwind action was sensational.

Shaw & Partners Financial Services and Tech2 were fast on the long spinnaker leg of the course to Obelisk where Shaw & Partners held the lead over Tech2, with Noakesailing back in third place and Honda Marine in fourth.

Working back from Obelisk to the buoy off Shark Island in Rose Bay, Tech2 applied the pressure to Shaw & Partners and was within 20sec as the pair headed off on a two-sail reach back to Athol Bay east to complete the first lap of the two-lap course.

Honda Marine had continued to move through the fleet and was now up to third, ahead of URM, Winning Group, Noakesailing and 'The Oak'.

Over the next two legs of the course, the three leading teams had moved well ahead of the rest of the fleet and the second spinnaker run from Clark Island to Obelisk was spectacular as Tech2 grabbed a narrow lead over Shaw & Partners.

A small problem as Tech2 approached the mark proved costly, and the team never recovered, leaving Shaw & Partners and Honda Marine to race for the win.

Honda Marine's boat speed was excellent in the lighter air and the defending champion took the lead from Shaw & Partners as the two teams battled their way to the Shark Island mark.

There was no change over the final two legs of the course as the race finished in practically no wind at all.

Today's Race Results and some images from the racing are attached.

Race 2 of the championship will be sailed tomorrow (Sunday, March 15).

Spectators can see all the teams while they are rigging, then follow the racing on board the club's spectator ferry, which leaves Double Bay Wharf, alongside the rigging area, at 2pm.