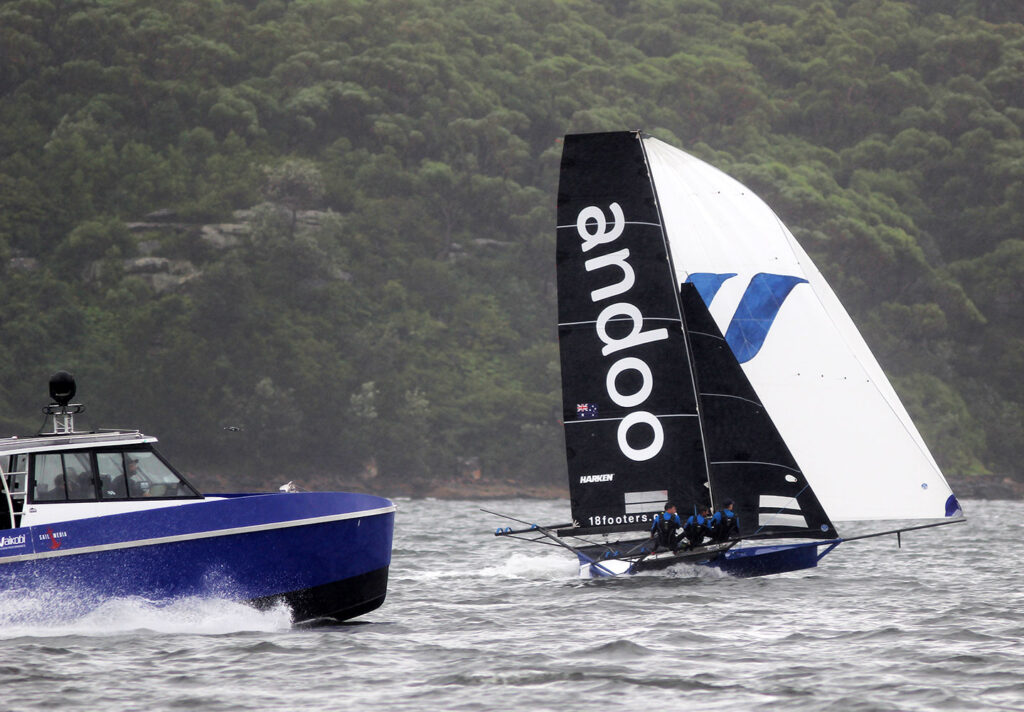 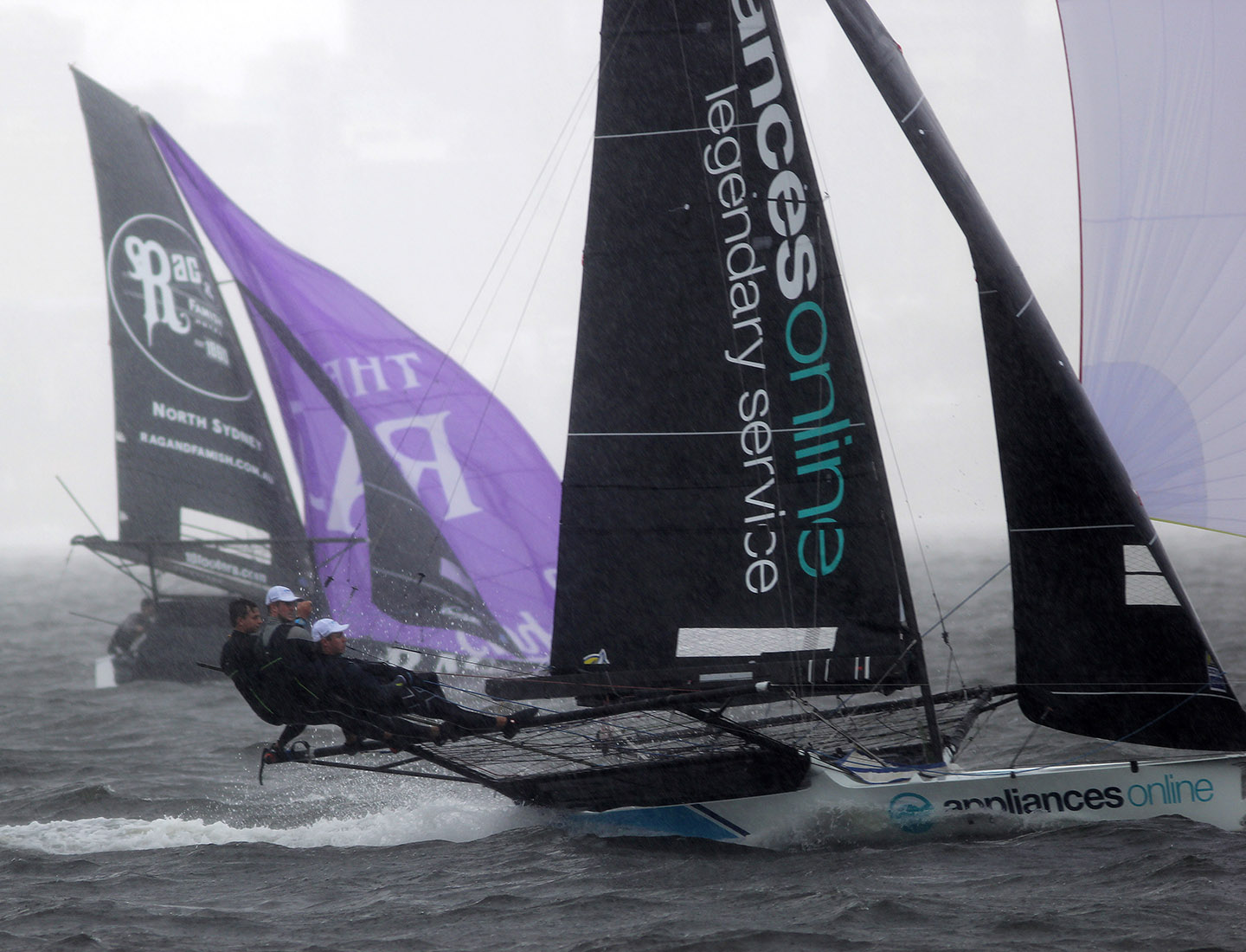 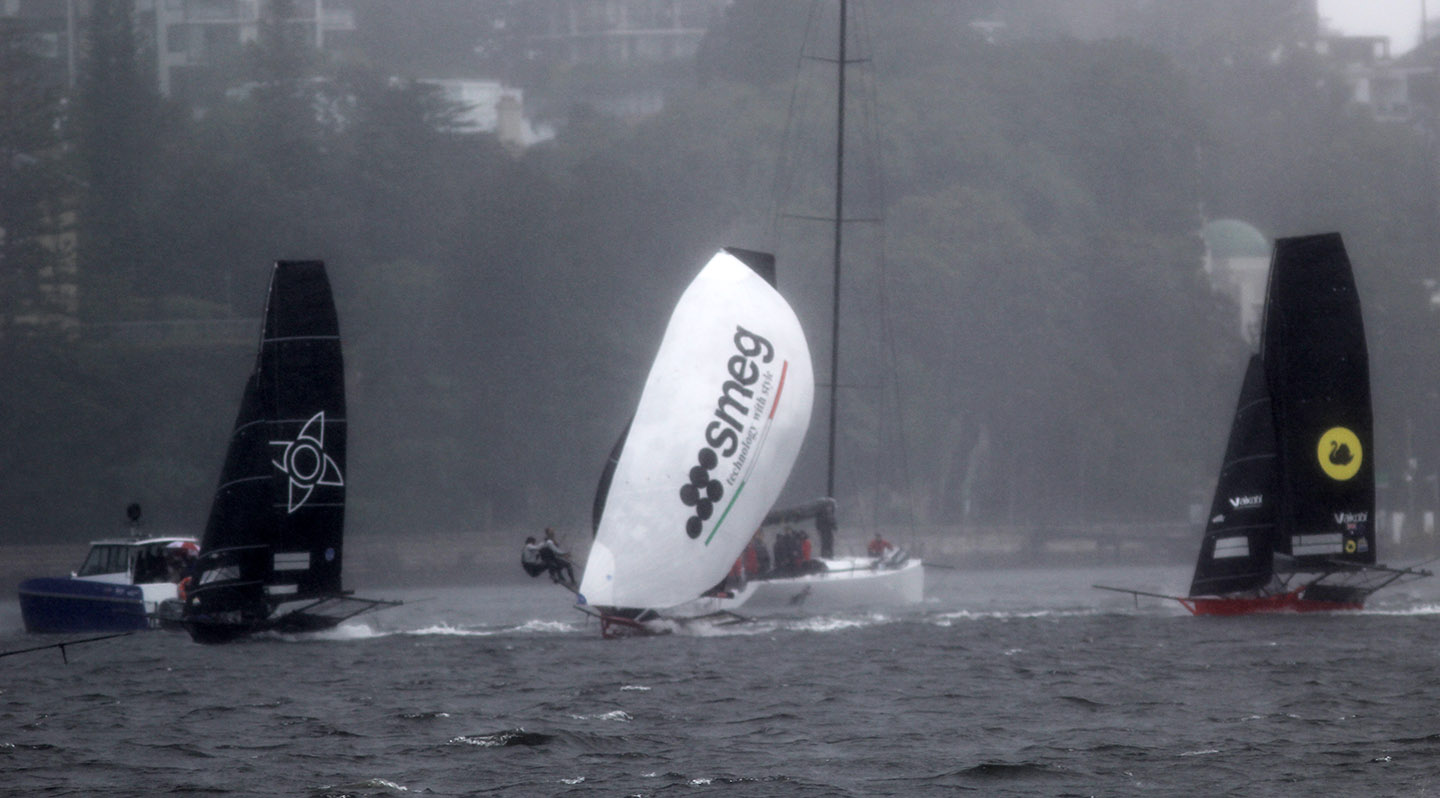 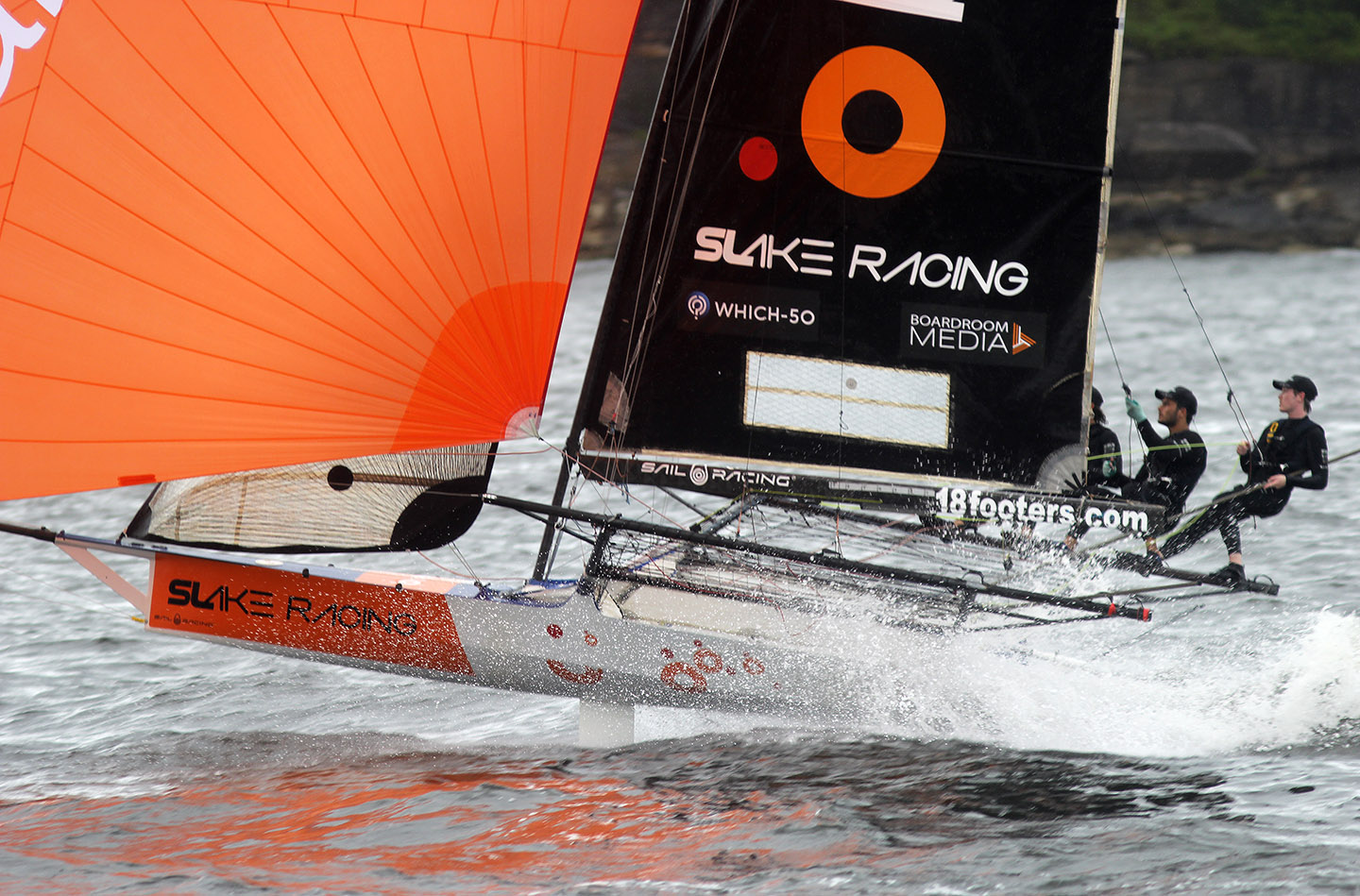 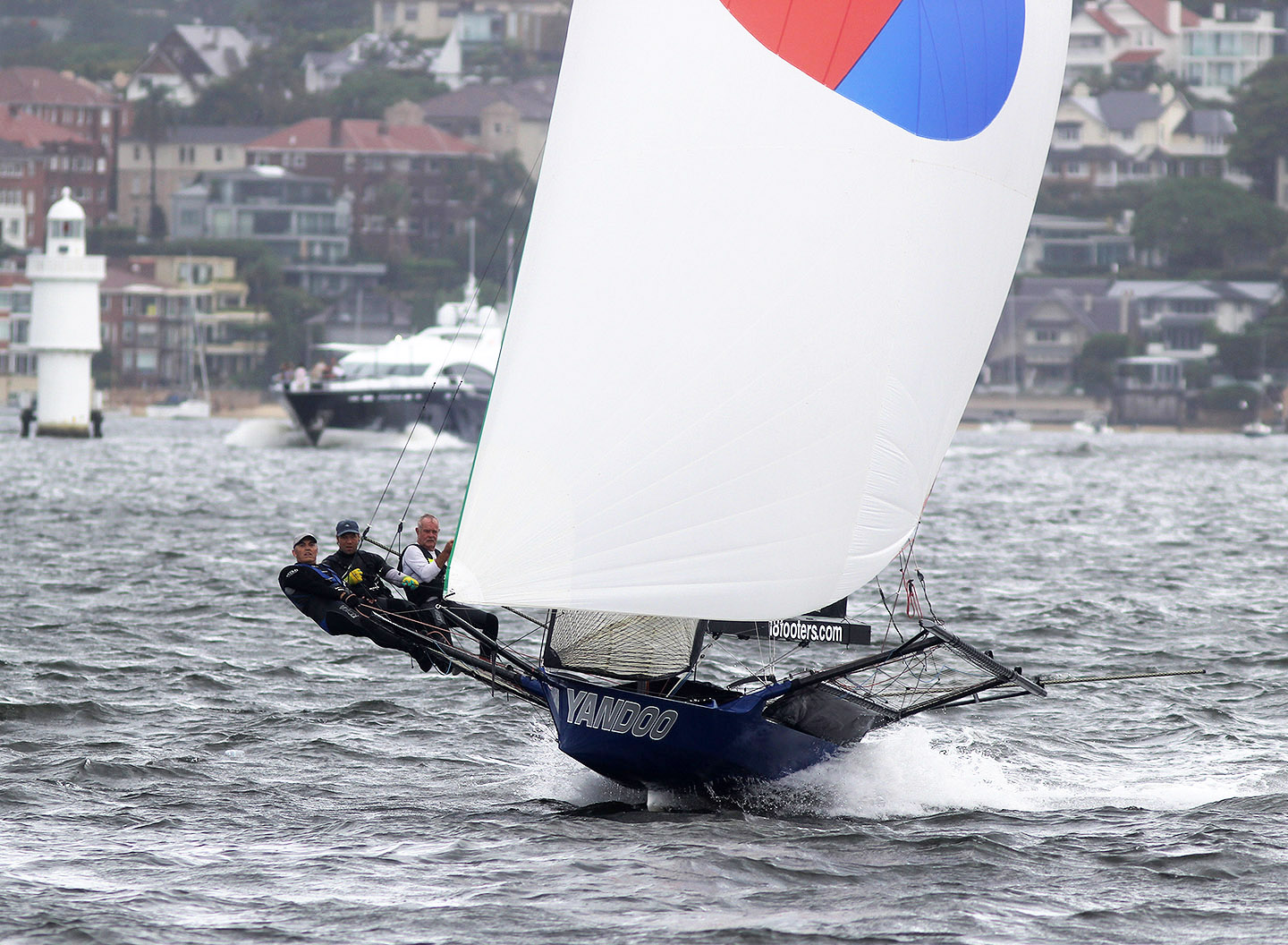 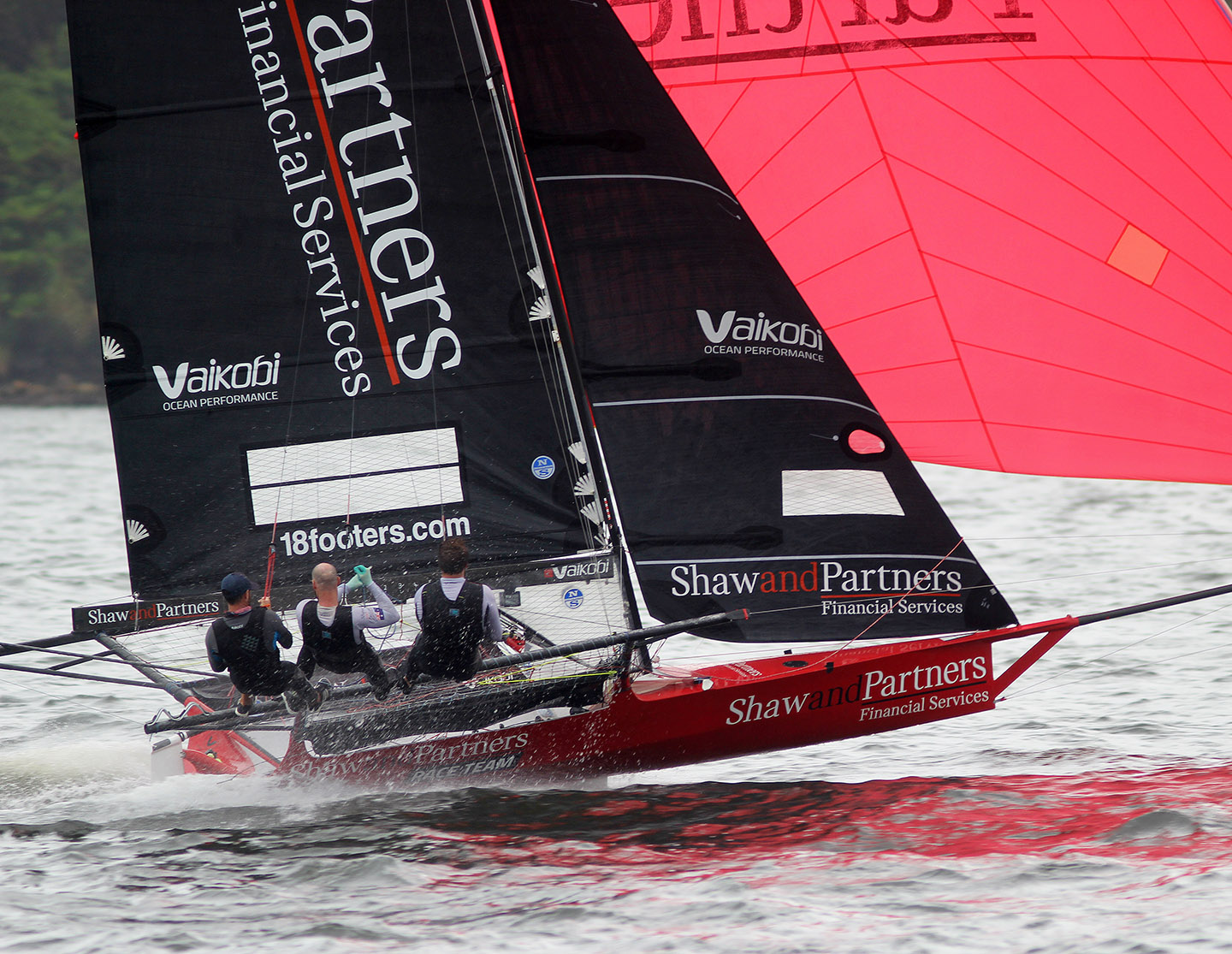 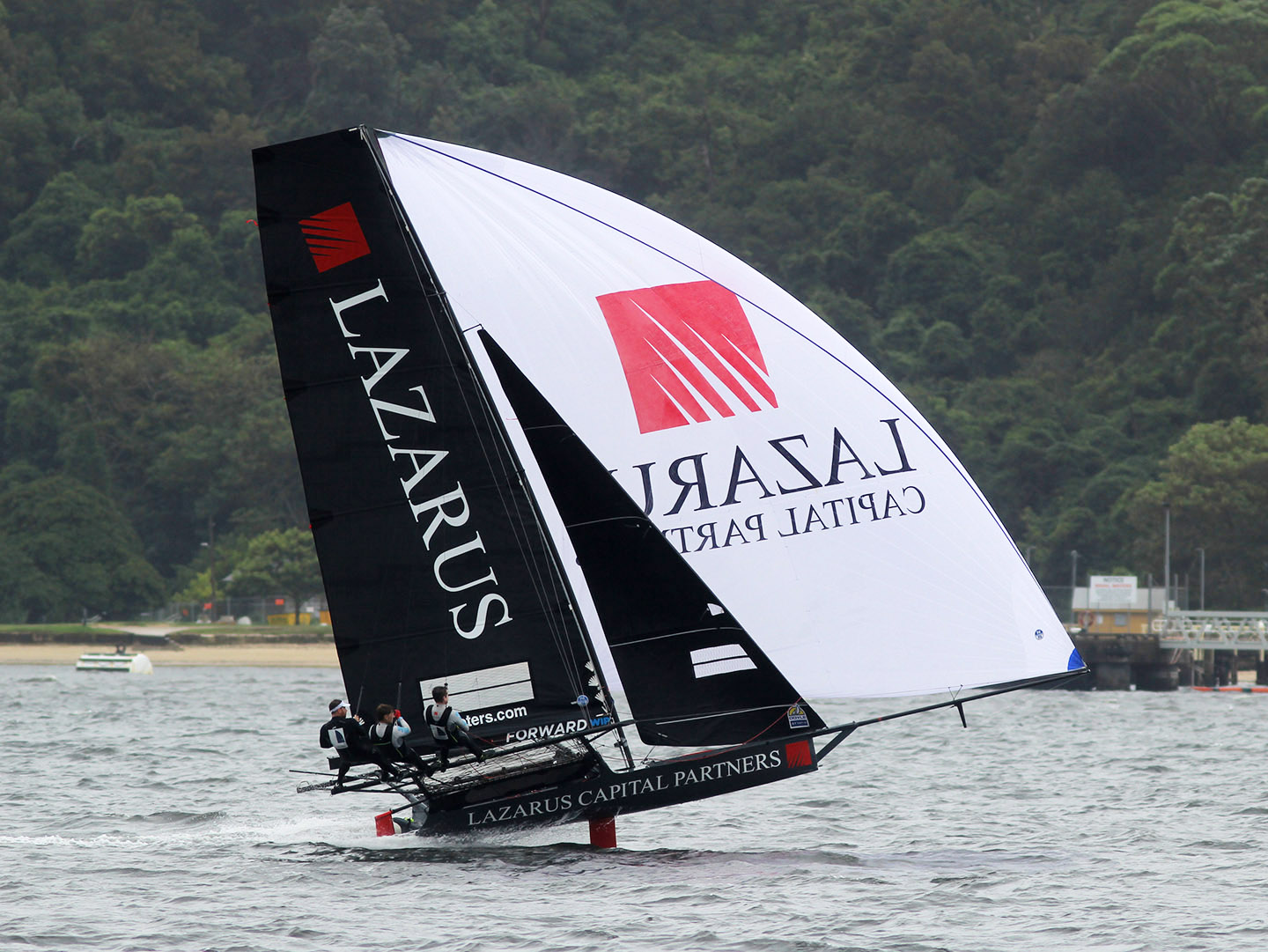 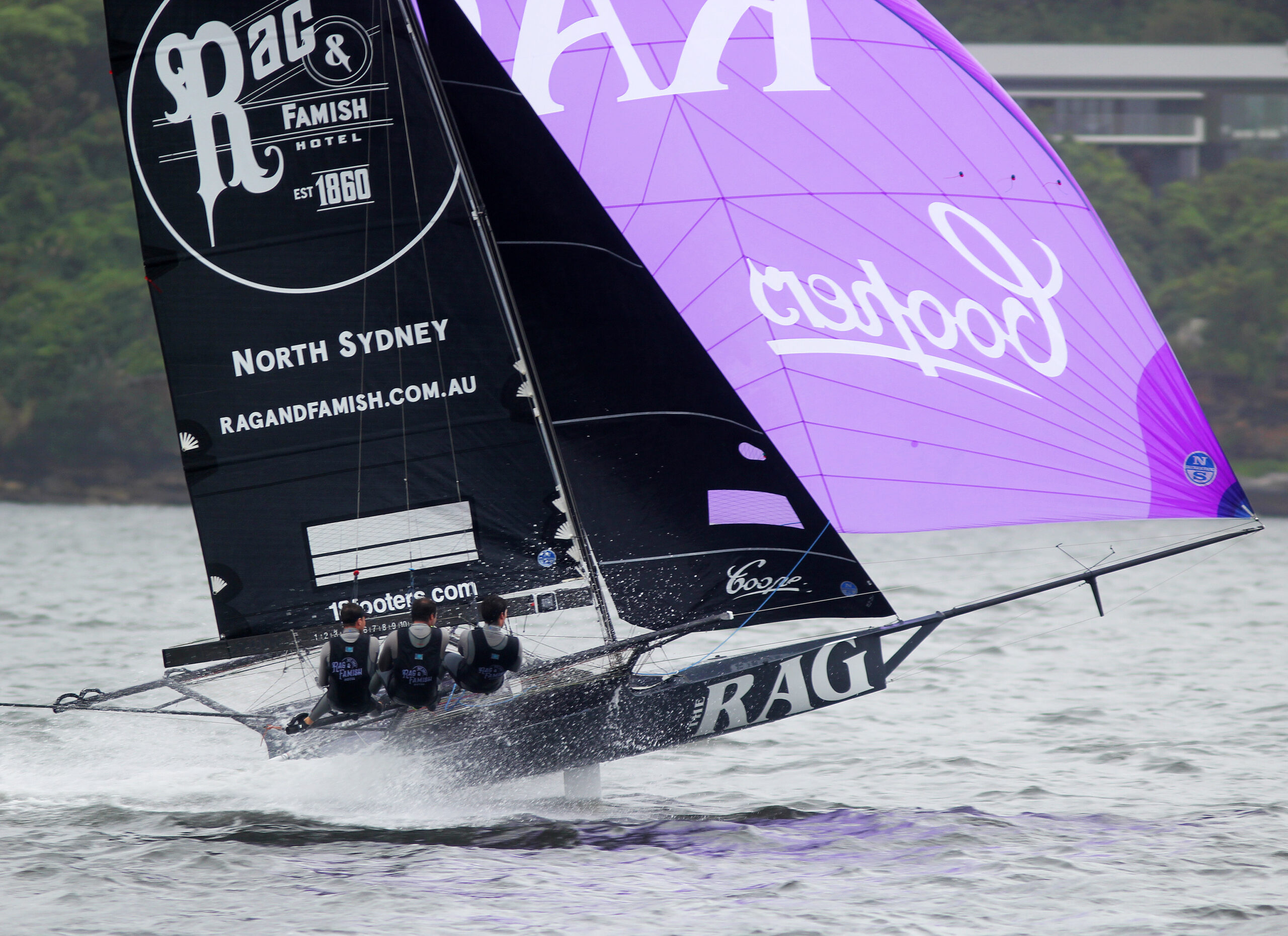 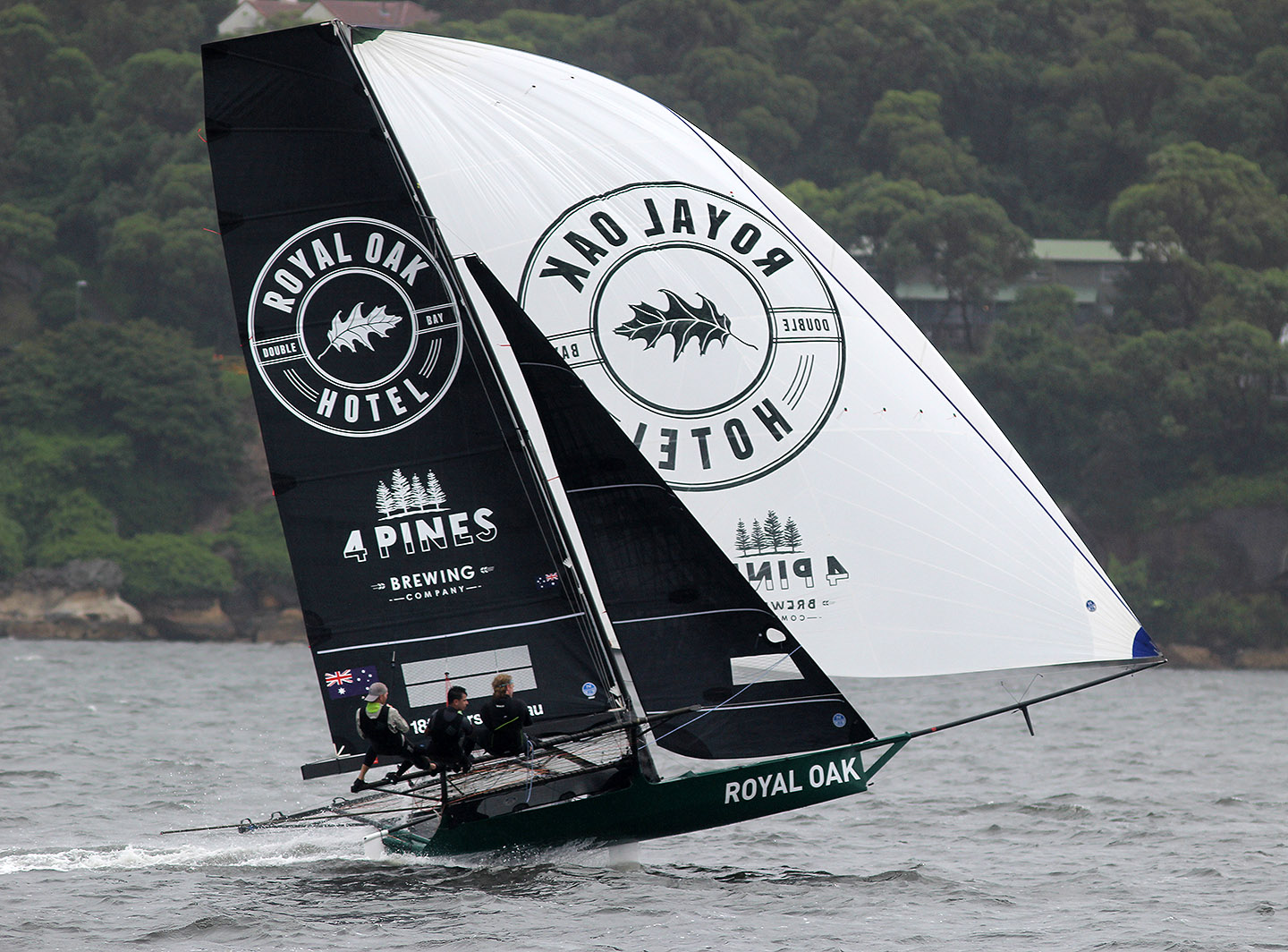 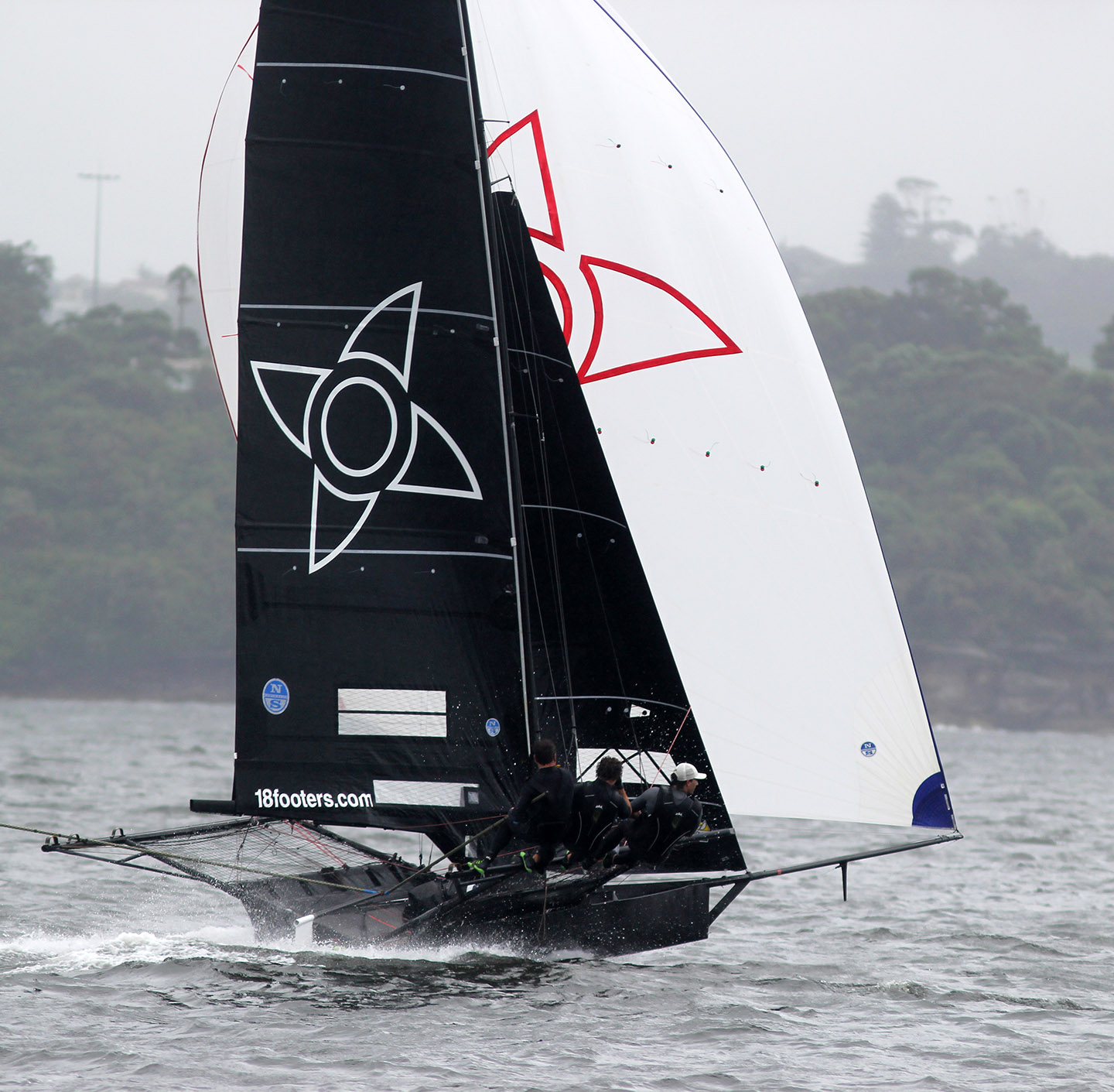 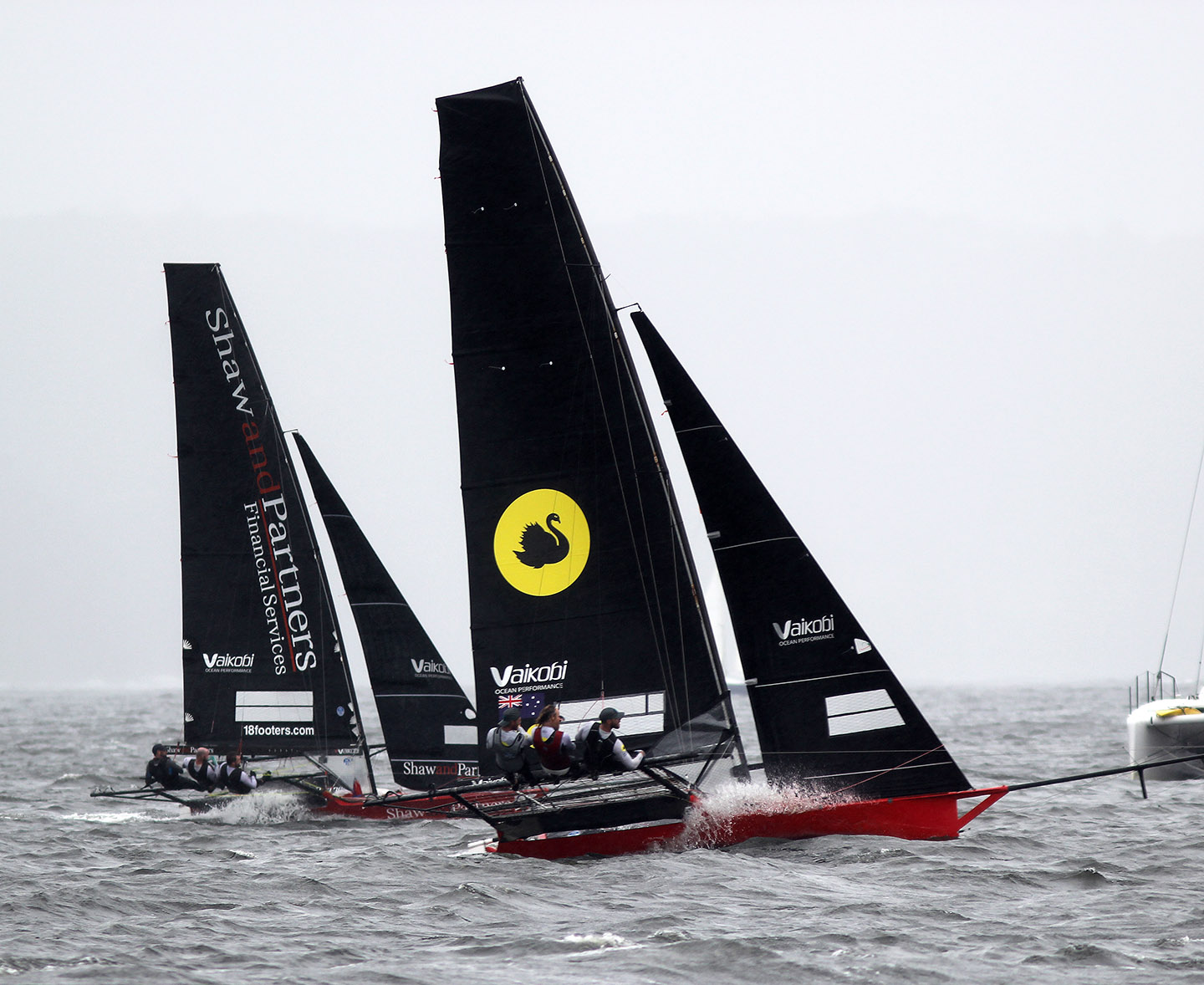 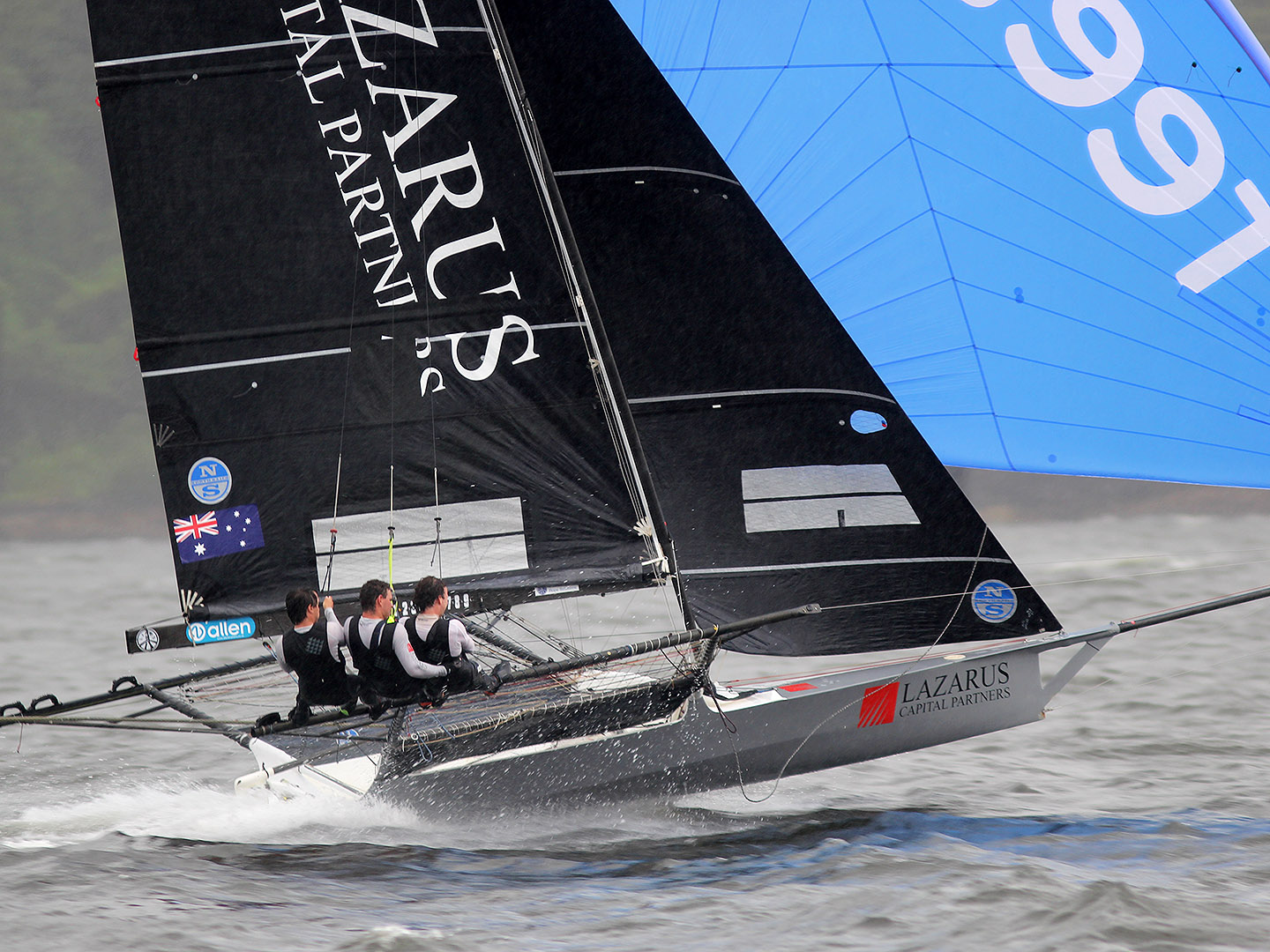 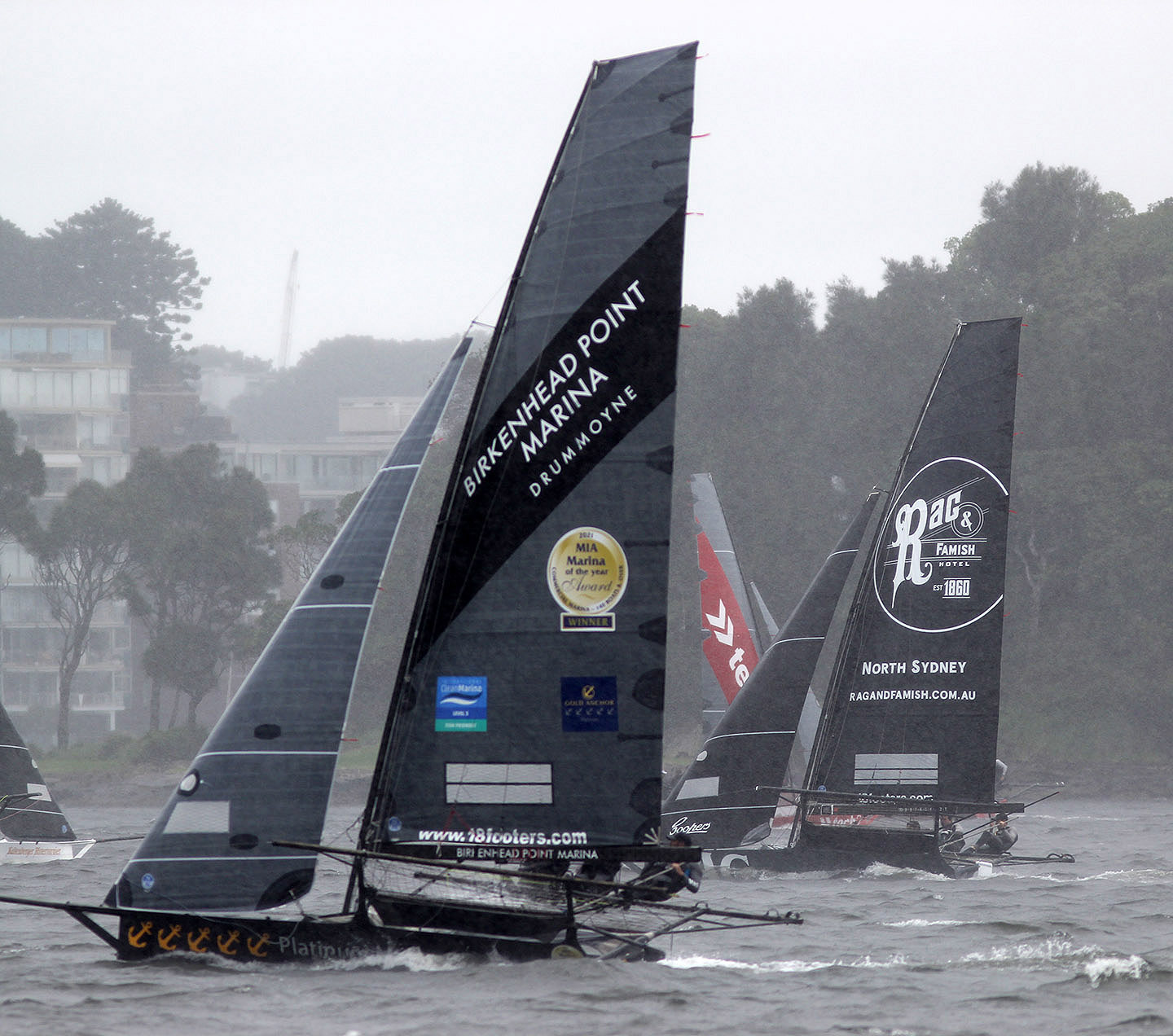 The Andoo team of Seve Jarvin, Matt Stenta and Sam Newton consolidated yesterday’s victory with another outstanding performance to take out today’s Race 2 of the 2022 JJ Giltinan 18ft Skiff Championship on Sydney Harbour.

The team grabbed an early lead in the 20-knot Southerly wind and led clearly around the entire course before going on to claim a one minute win from the Tech2 team of Jack Macartney, Charlie Wyatt and Lewis Brake, which also finished in second place yesterday.

Shortly after the start of today’s race a heavy rain shower brought extremely low visibility on the harbour as the fleet raced under spinnakers from Clark Island to Obelisk Bay.

Once the shower cleared, and the visibility returned, as the fleet made its way back on the beat to the Rose Bay mark Andoo had established a big break over her nearest challengers, which were Tech2, Noakesailing, The Oak Double Bay-4 Pines, Lazarus Capital Partners and Rag & Famish Hotel.

While most of the positions remained unchanged over the second lap of the course, the spectacle of speed and crew work on the skiffs was enough to keep spectators’ interest high as the skiffs completed the long course in just over 1 hour 14 minutes.

With just three legs of the course left to sail, the Tech2 team refused to surrender meekly and put as much pressure on Andoo as possible and for a short time looked as though it could have been a closer margin at the finish.

Special mention must be given to the performances of many of the younger/new teams in the fleet and it will be interesting to watch the continued improvement over the next two days racing over the shorter courses.

Races 3 and 4 will be sailed on Sydney Harbour on Tuesday then Races 5 and 6 on Wednesday, before long course racing resumes on Thursday.

The handicap section of today’s race was won by the Noakes Youth team of Tom Cunich, Fynn Sprott and Harry Smith.