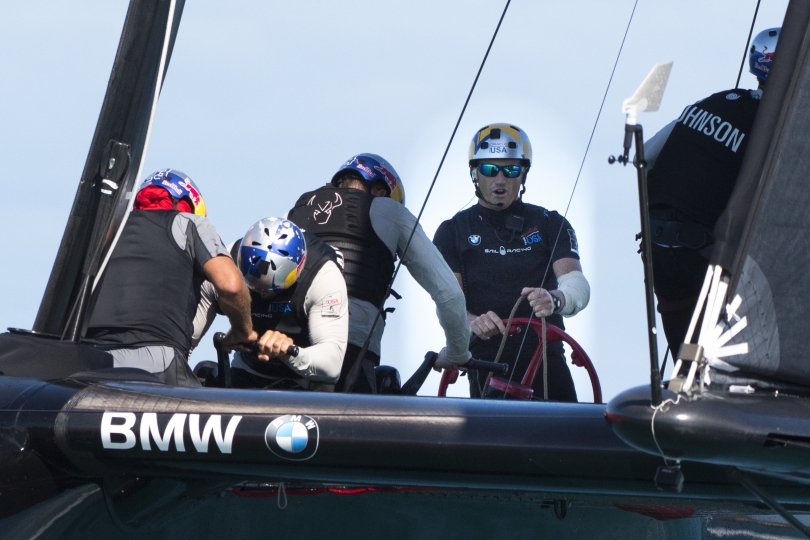 An extended series of practice racing has concluded in Bermuda with skipper Jimmy Spithill saying the team has added to its knowledge base through competition against the other Bermuda based teams.

“Anytime you get to simulate real race conditions, with the America’s Cup Race Committee (Iain Murray, Melanie Roberts) here, it pushes the whole team that much harder, and it exposes any shortcomings,” he said.

“There was some great, close racing between ourselves and Artemis Racing and SoftBank Team Japan. All three teams won and lost their share of races and we all learned a lot I think.

“Unfortunately, the British seemed to be having issues and weren’t competitive which was a bit of surprise.”

Spithill says these race periods put the full program under the microscope, from shore operations, to sailing team, to designers.

“We’re trying to simulate, as much as possible, what a race day in and May and June will look like,” he says. “From the time we arrive at the base in the morning and make a call on boat configuration, to when we dock-out, to how we conduct our performance de-brief after sailing. It makes for long days, but it’s good to get a sense of that rhythm now, so we can make adjustments before the summer.”

The racing over the past two weeks was intense, with some very aggressive pre-start action, as well as lead changes and close crosses up and down the race course.

“I think what you’re seeing is the teams getting more comfortable with the equipment as the systems get refined. One of the real challenges in this America’s Cup is in providing enough power at critical moments to make the maneuvers you want to make. From what I could see, all three of us have made strides there over the past few months, allowing for more aggressive sailing.

“Like in all racing, the starts are important and you want to get your nose in front early, so that’s why you’re seeing the pre-start action. But that being said, this is far from a one-way race track. There are passing opportunities. And we’ve seen that when you make a mistake in a maneuver, the other guy is right there ready to pounce.”

With the conclusion of the race period, attention now shifts to the launch of the new America’s Cup Class boat. ORACLE TEAM USA will have an official unveiling of its new boat on February 14, which is the anniversary of the date the team first won the America’s Cup, in 2010.

“It’s a real tribute to our shore crew that they’ve been able to progress work on the new boat, while keeping us out on the race course day after day,” Spithill said. “I’ve always said we’ve got the best shore operation in the game, and they’ve proved it again.”