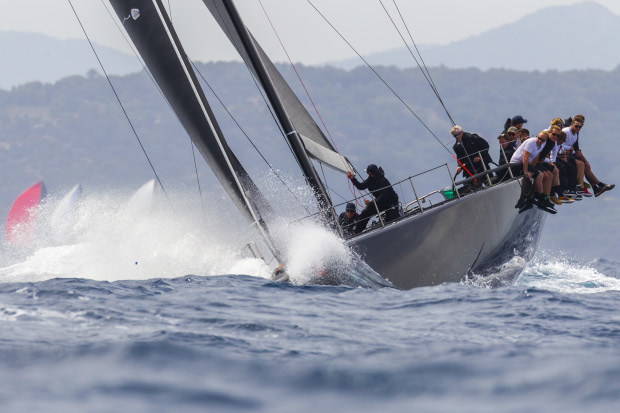 Saint-Tropez threw up unexpected conditions for the maxi boats competing on their first of three days of inshore racing at the Rolex Giraglia, organised by Yacht Club Italiano and Société Nautique de Saint-Tropez, supported by the International Maxi Association.

As crews set off on their two windward-leeward races off one of the Cote d’Azur finest beaches – Plage de Pampelonne – they were bracing themselves for winds building in the afternoon to 30 knots. In the event, a front inland seemed to suck much of the wind away. This resulted in the first attempt at today’s race being abandoned just after the maxis competing in the IRC 0 Racer class had made it through the leeward gate. After a long wait, the race committee succeeded in completing the race on their second attempt, albeit on a shorter course with the breeze building on the second upwind to the high teens and gusting above 20.

Among the maxi racers there was stiff competition between the Maxi 72s Caol Ila R of Alex Schaerer and Dario Ferrari’s Cannonball and also Sir Peter Ogden’s elongated Jethou, while George David’s mighty Rambler 88 powered away into the distance.

Ultimately some nimble footwork by Jethou out of the start set her up to win today’s race, despite being passed to weather by Rambler 88 at the time. As tactician Paul Campbell-James recounted: “We had a nice little left shift and managed to roll out just as they were rolling us and then we took a nice little shift back and managed to cross the other two [Caol Ila R and Cannonball].”

Like most of those in the Racer division, Jethou had set up today for brisker winds than those that materialised, especially in the first attempt at today’s race. “The abandoned race was light and choppy so all the rigs were too tight and the sails were too small,” continued Campbell-James. “Once the breeze got back up in the second race, suddenly we were in range and could use our extra length. We were going well.”

The final run of what would be the day’s only race, was fun on Jethou. “It was a full surf-fest and it was about timing your gybes in the waves. In the middle of one gybe we accelerated down a wave and we got to 21 knots!”

Even so the results were tight with Jethou beating Cannonball by just 28 seconds and Caol Ila R by 1:06 under IRC corrected time.

On board Cannonball, the crew was blowing off the cobwebs today and were especially relieved the first attempt at today’s race was cancelled as they hadn’t been doing so well. Cannonball’s French strategist, former America’s Cup skipper Sebastien Col explained: “We are not on top of our game yet. This was the first race of the year and we haven’t trained too much. It was a difficult day for all the owners to drive their boats upwind. They are quite light boats for their size and are quite affected by the waves.”

For the maxis competing in the IRC 0 Cruiser class, the 60 footers seemed to have the closest racing today albeit perpetually in the wake of Argentinean Miguel Galuccio’s Vera (ex-My Song).

Barjon was disappointed that the wind had vanished on the first attempt at today’s race as at the time they had held a substantial lead. Genoa-based Calvini, who has raced the last 15 Rolex Giraglias, since 2008 with his present boat, observed the conditions had been strange with the big uncomfortable waves, without much wind.

Meanwhile Benoît de Froidmont was delighted by his strong start to Rolex Giraglia. “It was quite surprising because the forecast was for about 30 knots and we weren’t sure we’d race,” he said. “We are having very close racing with the other 60 footers like Lorina 1895 and Itacentodue in real time.”

In his role as President of the International Maxi Association, de Froidmont added: “The maxi fleet is very good here – very competitive. Today it was complicated but the race committee did a good job waiting until the wind was well established.”