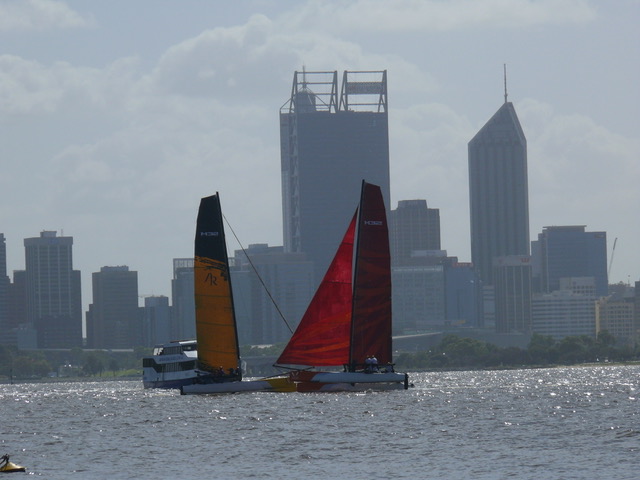 For local Perth skipper Matt Jerwood and his Redline Racing Team, the M32 Australian Series event was always about getting time in the boat, and learning, they did this supremely well, winning 14 of 16 races sailed. The team of Jerwood, Patrick Vos, Alex Landwehr and Nial Morrow knew going into the regatta that they needed to improve their fleet racing, and after three days they can say “mission accomplished.”

“We’ve learnt a little bit more about starting and some more of the passing lanes in the racing,” commented Jerwood at the end of the day. “We’ve learnt that we’re sailing pretty well, they are the main things.”

The team now have a few days off before the World Match Racing Tour’s Match Cup Australia, starting on Monday (20th March), being hosted by Royal Freshwater Bay Yacht Club, a little further down the Swan River from this event.

Second in this event was the Sydney based Team Australia skippered by Sean Langman, who came good on the last day to climb from fourth place after day 1, having got to grips with the M32 during the regatta. “Day one we really couldn’t get the boat going,” he admitted, “so we had a lot of soul searching, and a lot of talking about it, we got out on the water early today, and pretty much figured that we’d worked it out.”

Also making a comeback today was Sweden’s Mans Holmberg, who ended the first day in second place, but them plunged down the leaderboard to fifth, before recovering to take third place by one point.

The regatta was hosted by Mounts Bay Sailing Club, situated on the Swan River’s Matilda Bay, and is the first time an M32 Series fleet racing event has been held in Australia. It was very much an opportunity for aspiring and curious sailors to try the M32 in a competitive situation, and there were plenty of smiling faces at the end of the day.