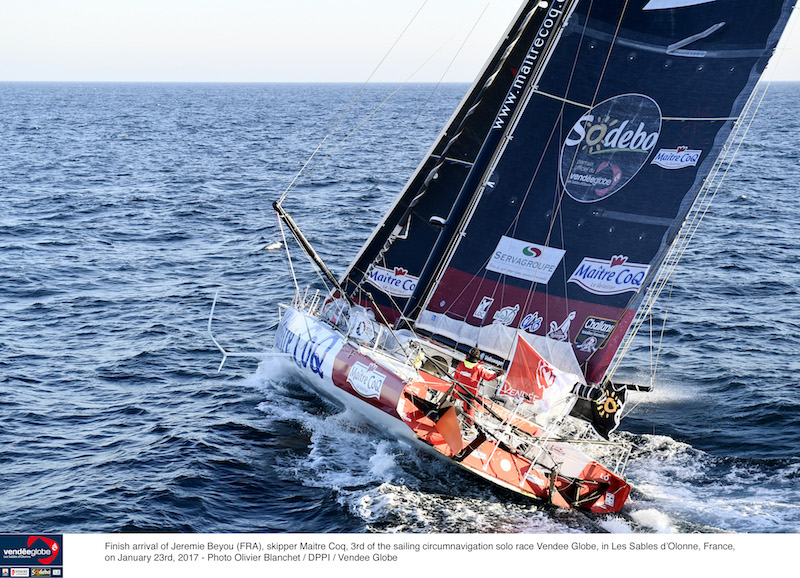 Jérémie Beyou at the finish of the Vendee Globe 2017. Photo Olivier Blanchet/DPPI/Vendee Globe.

Ahead of the start of the 2018 Route du Rhum, we headed to Lorient, France to catch up with Volvo Ocean Race winner Jérémie Beyou. Having finished third in the 2016 Vendée Globe, he knows the IMOCA class well – and gives his insight into the new boats which will contend the 2021 race.

Talk us through this new IMOCA boat, and how it varies to your experience on the Volvo Ocean 65.

Yes, these boats are quite different compared to the Volvo Ocean 65. It’s a different way of sailing, and I think you sail more like you’re on a multihull compared to a mono. You have to be able to manage it – you don’t have to push hard all the time, you have to take care of the boat and watch the data and loads on the boat. Those of us who sail in the IMOCA class regularly understand this, so maybe we can do the next race as a crew. After developing these boats, we know the rules very well, so I can imagine collaboration between teams who are already sailing in this class ahead of the next race.

You just won the Volvo Ocean Race as part of a mixed Dongfeng crew – how would a fully-crewed setup work on these boats?

Sailing with five people on these boats is really nice. We do it sometimes, during deliveries and small races. It’s a good size and because it's so difficult to sail the boat alone, having five people onboard means you can push the boat to its limits and focus 100% on performance all the time, which you can’t really do on your own. But it also means when you’re sailing five rather than nine or 10 in a usual Volvo Ocean Race boat, all the sailors onboard must be multi-skilled. It’s key that the same person can be a trimmer, a driver, a bowman, and be able to do the strategy, so it’s like sailing with five solo sailors onboard rather than a traditional crew.

How much conversion would need to be done to make this boat capable of racing with a full crew onboard?

I think it's mainly a question of living onboard. The inside of the boat would need to be adapted for five people. That’s the bunks and kitchen, for a start. And of course the cockpit too. We really designed Charal for solo sailing, so the cockpit would need to be very different. After that, the big difference will be on the hull design and the foil design, depending on the course of the race. If it’s the same stopovers as in 2017-18, then you have a lot of time upwind, a lot of light wind spots. Charal is a boat designed for the Vendée Globe, which is broad reaching and downwind in strong winds only, so it’s not currently an ideal design for the next race. I think that seven boats in the next race isn’t enough, we need between 10 and 15 boats to have the perfect number – so if every team can’t build a new boat, it’d be interesting to have some boats coming over from the Vendée.

Do you think that the collaboration between the race and IMOCA is a positive move for the sport, and sponsorship?

Yes. In my case, Charal is a very French company, so right now doesn’t have a lot of interest in international markets and round-the-world racing, but our team, Charal Sailing, definitely has an interest in that. I do think the IMOCA class needs more international sailors. We have Alex Thomson who is the only non-French guy who is realistically able to win the Vendée Globe, but as well as Alex, we need a Stu Bannatyne, Daryl Wislang, and other new guys from the US. I think the connection between the two races is positive and will help develop the market for IMOCA, and it’s a great opportunity.

The 2018 Route du Rhum – Destination Guadeloupe begins on 4 November 2018. Mysailing will bring you all the details and updates.