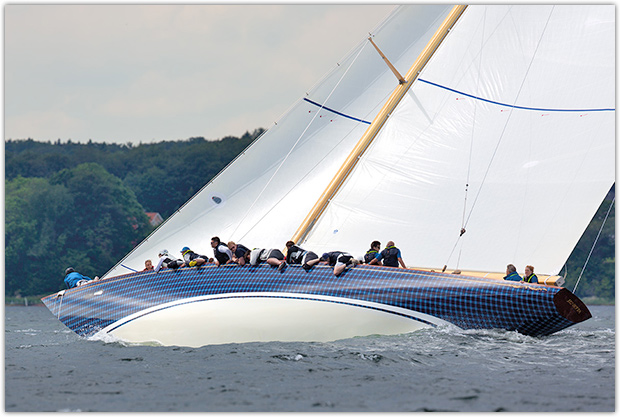 From the drafting table of Scotland’s renowned naval architect Alfred Mylne and launched in 1939, Jenetta (K-1), design #395 was one of four 12mRs commissioned by Sir William Burton.

Jenetta (K-1) joined the English 12mR racing scene at Cowes, Isle of Wight along with Tomahawk (K-13), Flica II (K-14) and Vim (US-15). With her long waterline K-1 was fast, but Vim with Harold Vanderbilt at the helm was nearly unbeatable. On only one occasion did Jenetta prevail when she won a 27 nm race by just 2 seconds!

After Burton’s death in 1942, Jenetta’s ownership passed to A.W. Steven and in 1953 to the Urry family of Vancouver (CA) who converted her to a ketch in 1957. As her condition progressively declined throughout the 1960s-70s she was removed from Lloyd’s Register in 1976 and sank into Pitt Lake where she remained until…

Rescued by Oliver Berking in 2009 Jenetta became the third 12 Metre brought back to life at the Robbe & Berking Shipyard. Work began in 2017 and she was relaunched on May 25, 2019. Although only her lead keel, some planking and end sections of her deck and hull were saved, original Mylne designs were used to rebuild parts that were irretrievably lost.

Since her ‘re-birth’ she has proved to be as fast as originally envisioned by Mylne. With her long sleek waterline and unique tartan plaid topsides (representing the University of Glasgow, Mylne’s alma mater) she is a head-turner!

You won’t believe how bad she looked coming out of the lake.

For the full story and video, go to: https://12mrworlds.com/