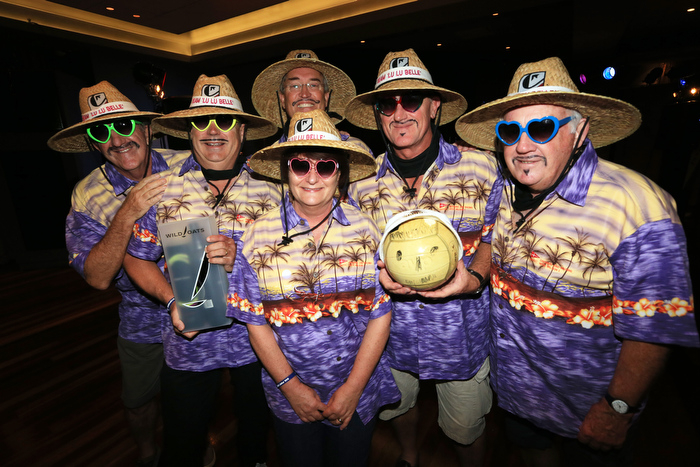 A rotund character by the name of ‘Wilson’ will be having a ball, literally, when a large and fun-loving fleet of Jeanneau yachts gather for the Commodores Cup cruising series at the 2016 Sail Port Stephens regatta, April 11-13.

Wilson is the much-loved mascot aboard Lu Lu Belle, a Sydney-based Jeanneau Sun Odyssey 37. He doesn’t contribute a great deal in the sailing department, being torso- and limb-less, but apparently never misses a good time.

Legend has it that colourful yachtsman Peter Lewis found Wilson around the time of the Tom Hanks’ film Cast Away, and he’s become a fixture on Lu Lu Belle. “He’s not a ball, you understand, but if he was he’d resemble a Wilson volleyball,” Peter explains, tongue firmly in cheek.

“He is really looking forward to Sail Port Stephens … and I’m sure he’ll fit right in at the ‘bowtie and boardshorts’ Ball they have planned for the Commodores Cup presentation.”

Wilson and other guests will be transported to the Salamander ‘Beach Ball’ for a night of food, fun and barefoot dancing in the sand. Cost is $30 adults, $15 children under 16, which includes dinner – available to sailors and the public through Sticky Tickets.

Jeanneau dealer Lee Condell, from Performance Boating at Pittwater, believes at least 20 boats will form a brand division at the Commodores Cup, which is renowned for its fun and relaxed racing format.

Just getting to Port Stephens will be a real adventure for most, as they rarely venture from their home ports of Port Hacking, Sydney Harbour, Pittwater and Lake Macquarie.

“When we held our first rendezvous at Port Stephens in 2011 we discovered that around half of the participants had never sailed beyond their home port,” Condell said. “They were able to go offshore with confidence because they were in company with others.

“The crews get along like a house on fire and have a bundle of fun as a group. There’s plenty of great sailing water and a nice atmosphere, so I can see why Sail Port Stephens is a growing event.”

SPS Race Officer Denis Thomson has deemed that Category 7 safety regulations will apply to the Jeanneau fleet to negate the need for items like a storm jib, rarely used on yachts with furling headsails.

For Peter Lewis the regatta is what sailing is all about: “We’re a cruising boat that races rather than the other way around. We are quite competitive and have a reasonable amount of silverware but for us it’s about sailing well then having a really good time with the other crews.

“To me it’s the premier regatta in Australia because there’s the fun and challenge of doing the event along with the camaraderie that comes from it – a lot of the crews are now very good friends.”

Lu Lu Belle is 10-years-old and clocked around 19,000 cruising and racing miles, but both owner and crew take great pride in the fact that it remains in showroom condition.

“I have to say my obsessive compulsive behaviour is part of it … it’s called ‘wax on, wax off’,” Peter laughs.

A number of Jeanneau crews will be staying on to compete for the Port Stephens Trophy under Performance Handicap starting Friday, April 15. Saturday April 16 will feature the other showcase social event of the regatta, an End of Season ‘Sailebration’ to toast the season in style.