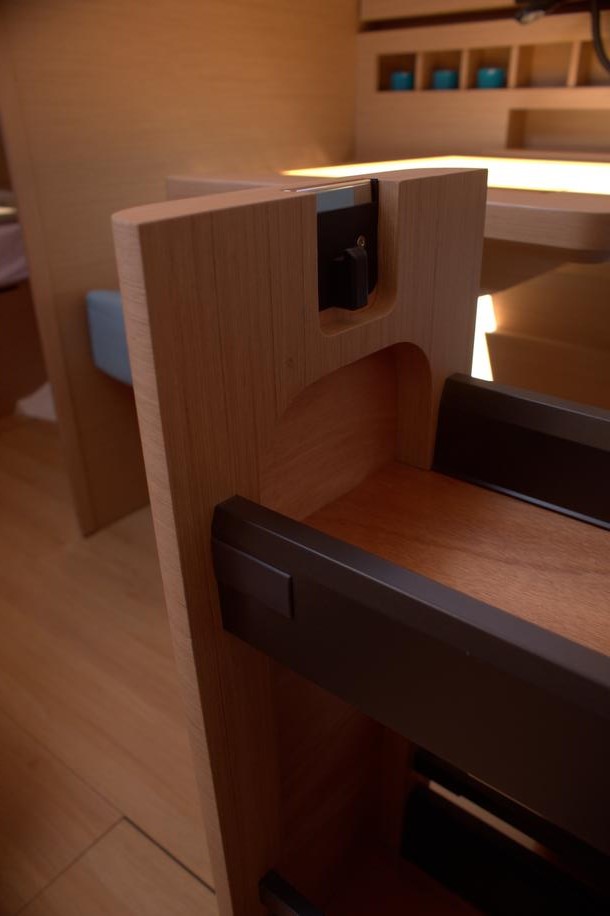 Let’s start with what I find as the most interesting addition to this yacht’s features. It is in the master cabin in the bow.

An offset cabin door to port leaves the starboard side vanity and shower recess with an enormous amount of room. The shower sits just forward of the mast and bulkhead, behind a tall rack of shelving and drawers that face the bed. To starboard, alongside the shower, is the vanity basin and cupboards. Both areas have large hatches overhead and nearly two metres in headroom.

This leaves the separate head cabin to port, behind the open cabin door and, although it may be a bit small due to not including the shower, it is sizable enough facing aft with 190 centimetre headroom and still with its own washbasin and overhead hatch.

This is a well-thought out cabin layout and a interesting start to a promising day.

The master bed is two metres by 1.6m, as are all the beds in this three cabin version; that is a queen size, allowing the use of standard bed linen.

There is room for a step-up and walk-around the bed with his and her hanging lockers on either side and extra storage areas as well. Hull windows and overhead hatches ensure plenty of light and fresh air.

We are on board the latest thinking from Jeanneau, the Sun Odyssey 490. You may have managed to get onboard at the recent Sydney International Boat Show.

The biggest interest amongst possible buyers was on deck with its intriguing walk-around side decks but, since I had already tested the SO440 with this feature, it was not such an attraction this time. What else had the Philippe Briand design team and new interior designers, Piaton Bonet Yacht Design, come up with?

Once you walk out of the forward master cabin you are in the main saloon area, there are two different panelling timbers to choose from as well as two different floor styles.

To starboard is the main seating; with the cabin door offset to port the lounge saloon is quite large and would easily seat six with the inboard movable bench seat. Long hull windows complement the light from the cabin side windows, plus two large hatches on the cabin top and two smaller hatches over both the saloon and the galley to port. The table can be lowered to increase the sleeping/lounging possibilities.

As the saloon is so large you may think the U-shaped galley would be cramped on the port side of the saloon, not so.

There is still plenty of width in the benchtops, wider than a standard kitchen. Pushed right against the hull there is only room for a storage shelf behind the benches but plenty of enclosed storage underneath.

A two-burner cooktop is standard but a three-burner is a welcome option on the gimballed stove. It has a deep sink and a half sink with access to the fridge at the top and bottom and plenty of other cubby holes for more storage or extra freezer options, microwave etc.

As you can see in the photo, the U-galley ends at the aft end in a T-section. This houses two tall pull-out drawers, fore and aft, topped with a nice leather-bedded shelf. A neat idea, which apparently can hold a dishwasher.

One pet peeve I have with all boats I test, is the door closing mechanism. Usually it is that push button style, of which I am unsure of its holding capability in a heavy deep water swell. Jeanneau have swapped those locks over for a new style, I am still unconvinced of the strength, but it is different.

The other pet peeve, which follows, is the move towards self-closing doors on cupboards etc. To me this breeds lazy seamanship and is bound to lead to disaster.

On the starboard side, matching the end of the galley, is another tall storage unit. Alongside it is the door to the second head and shower cabin.

There is less room in this cabin, but still enough to put hands on hips when showering. There is also less storage and only a cabin side window for fresh air. On its aft bulkhead is the separate door to the starboard aft cabin.

One of the side benefits of Jeanneau’s sloping side decks becomes relevant when you get down below. Most people think the deck slope will reduce the headroom for the aft cabins, but it is not so. What you do get is another hatch facing into that sloping side deck, providing a nice flow of fresh air right where your head is, while anchored and sleeping.

The way cockpits are configured nowadays you also get five portholes per aft cabin: the one just mentioned, plus a large hull window for a beautiful view across the water, two opening side hatches into the cockpit for crossflow and a large cabin top, side porthole facing aft as well.

I find it interesting to note, it would appear Jeanneau have not followed others and prefer its halyard lines running to winches either side of the companionway, as opposed to running them under the coamings to the winches at the steering station. I am not too sure of the reasoning but I find it no real problem either way.

It certainly means the areas just forward of the binnacles where the sail trimming winches are, are unencumbered by long halyard tails. Inbuilt rope bags are deep and wide and ready to keep any cockpit floor clear of spaghetti junction. These winches sit clear of the steering wheels as well. This appears to achieve three things: making it easy for crew to use them and facing forward while trimming, still usable by the helmsman plus
it brings the weight further inboard.

It also makes it easier to include the optional fold-down coamings which convert into a day lounge.

The centre table has a huge space within, which is built to fit an optional portable 12 volt fridge. This fridge can be stored downstairs or even taken ashore along with the portable grill under the transom seat behind one of the wheels.

As the master cabin door is offset to port, so too is the companionway, the cockpit table is also set a little to starboard so you end up with a wide port-side cockpit walk-through and a comfortable table experience on the other.

The backstay is split but does not go to either corner of the transom, they are anchored a little inboard. Finally, a backstay that does not impinge on the helmsperson. In fact, as one potential purchaser mentioned at SIBS, they now make a perfectly-positioned backscratcher.

Two huge hatches at the transom are designed to hold both the liferaft, which would be easily accessible when the transom is lowered; plus a space for a generator and watermaker and plenty more besides.

The mainsheet is on a bridle system, which I quite prefer negating the need for a traveller. The gooseneck is low to the deck to make it easy to raise and pack away the mainsail, but the boom is angled upwards so that it reaches a height of 2.2 metres in the cockpit.

The rest of the foredeck is quite standard. The bowsprit is a useful addition, putting the anchor away from the stem and giving a good anchoring point for the Code 0. Yes, it would be worthwhile ordering a Code 0 for the SO490.

The move to a ‘cathedral’ rig puts the inner shrouds onto the coachhouse roof providing a wider walk through space at the shrouds.

The anchor locker is spacious and the forward sail locker will hold everything; even if you include the optional drop-down bow thruster, which this test yacht included.

The steering stations benefit greatly from the sloping side deck: you can now sit behind the wheel or outboard while still facing forward, instead of that tiring sidelook strain when facing inboard. What is also not tiring is the ease with which this yacht sails.

Heading out onto Pittwater we were taking advantage of a late spring blow. Finally we were getting some 15 to 20 knot gusts, steady over ten.

Punching into the headwind the test yacht had the upgraded engine, from 42kW to 59kW, pushing us along at cruising speed of 2500rpms, over seven knots. It will do over nine knots at wide open throttle.

Probably due to the level of luxury on the inside, displacement is relatively high, while the ballast is low. The resulting ballast ratio appears to be compensated with a deep keel, long waterline and high wetted surface area to provide stability when in conjunction with the full hull chine on a wide beam.

A fair bit of effort has been employed, as well, to reduce the weight by constructing the hull in balsa-core, in fact, the company is claiming the deck is 30 per cent lighter than previous models. That is a lot of weight removed from up high.

Sails up and it was quick to see how an extra few metres can increase boat speed. While my previous test on the SO440 showed a quick yacht once the breeze got over ten knots, the SO490 was clearly happy to show her heels as soon as we hauled the sails on.

Like her smaller sister, once it heels on to that chine and extends its waterline, it was off. The twin rudders are set high on the waterline beam and parallel the water when heeled to provide maximum bite.

In just under 15 knots of true wind at around 40 degrees off the wind we were speeding along at the 8 knot to 8.5kn mark. If we cracked off to 75° we would have hit well over the theoretical hull speed for a 14 metre yacht.

On the close-hauled angles there is a significant performance jump when the breeze gets over 6kn true, another jump over 8kn and then the boat speed holds within a knot or two through the 10kn to 20kn band, until you crack sheets for a broad reach.

Clearly, between 80° and 120° this boat loves to live, through all wind strengths. That chine heel is gone and those nice rounded underbody sections give you a direct ride downhill. Bung up the Code 0 screecher on the inbuilt bowsprit and your passage making miles would be incredible; plus fun.

I tried to push this boat hard but, other than leaning onto the chine and no further, it was fingertip control the entire time. I felt like the seating for the helm is more enclosed and even a bit lower than what I am used to. It engenders a feeling of security that I like without losing any sight lines.

Quite a strain-free delight for the helmperson. Quite a ride. ≈