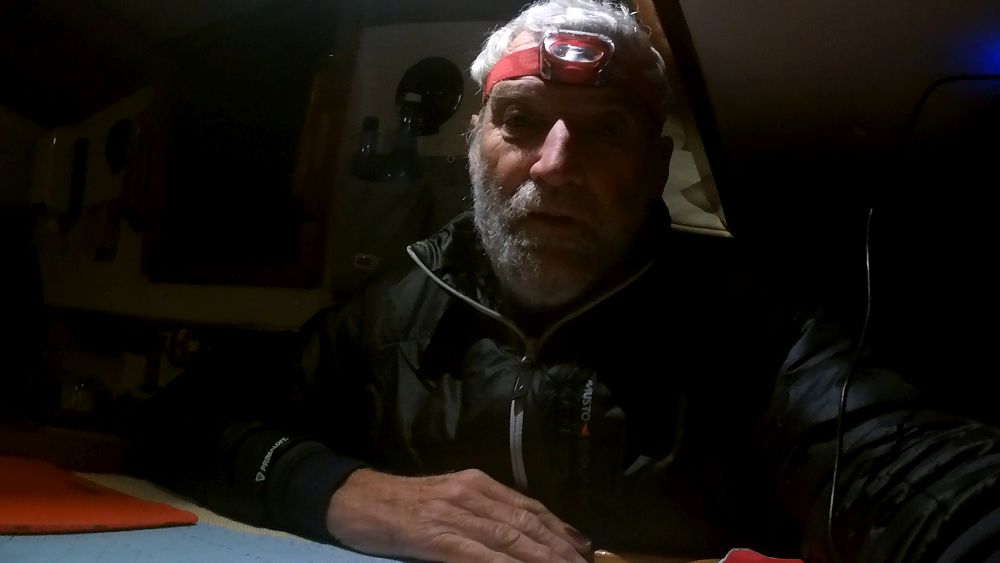 Jean-Luc Van Den Heede continues to extend his lead over the seven remaining Golden Globe Race yachts, now stretched across 4,800 miles of the Southern Ocean. This last weekend saw the 73 year old Frenchman follow in the wake of Sir Robin Knox-Johnston’s yacht Suhaili 50 years ago by cutting inside Stewart Island on the southern tip of New Zealand to navigate through the treacherous Fouveaux Straight at night.

The short cut has gained him a further day advantage over second placed Dutchman Mark Slats (Rustler 36 Ophen Maverick) who is now some 2,000 miles astern, and not expected to reach the BoatShed.com Hobart film gate before Monday 22nd of October.

At 16:00 UTC today, Slats alerted Race HQ that his yacht had just suffered two knock-downs in quick succession and that he had been hit by a toolbox flying across the cabin which may have resulted in him sustaining a cracked rib.

The tough Dutchman was not too concerned about the injury, but more about the sudden change in conditions. He reported that the winds had suddenly picked up to 30-35knots and that a 3 metre southerly swell was hitting Ophen Maverick on the beam. Race HQ is monitoring the situation and will make a safety call to Slats tomorrow.

News from India is that Abhilash Tomy, who underwent major back surgery last Thursday following his rescue in the Southern Ocean, is expected to make a full recovery. Capt. Sharma visited him in the INHS Kalyani Naval Hospital and tweeted “This naval legend now has a back of steel. The docs are totally floored by his sense of humour.”

Tomy responded “Platinum Sir. My value has just gone up!”

Gregor McGuckin who was dismasted in the same storm also made the news on his return to Ireland today. Recalling his ordeal aboard his yacht Hanley Energy Endurance which suffered three knock-downs in quick succession, he admitted: “We were in the worst possible place to be in at the worst possible time. The seas were huge – 15 metres high and the biggest problem I had was keeping the boat facing downwind and not slewing round to be beam-on.”

When he heard from Race Control in Les Sables d’Olonne that Abhilash Tomy had been injured some 90 miles to the north he set up a jury rig to sail towards him, ”I thought I might be first on the scene – but praying that I wouldn’t be!”

It's hard work in the calms too!

Since that storm, conditions in the South Indian Ocean have been more kindly, but that can cause problems too as Mark Slats reported today.

“The last 14-15 days have been the heaviest so far. Everyone thinks that the storms are heavy, but the calms are much heavier. Its much more work. It all started just around 30 September; the wind left but there was still a lot of sea. After 3 days the sea was flatter, but when you sail with your spinnaker up you are busy day and night.

“Just before this, I went into the water to clean the bottom of my boat. I was surprised how many barnacles were attached to the bottom. First I scraped the boat with a filling knife, then with sandpaper before finishing with a scourer. I came out of the water like an ice cube and set up the spinnaker. I flew it for 100 hours. So I have not slept for 100 hours, just naps of fifteen minutes.

“I have also become kind of scientist. There were all kinds of jellyfish around the boat. Very special. In the calms I suddenly had a whale next to the boat, really super cool. He just came to take a quick glance and then left again.”

Third placed Estonian Uku Randmaa (Rustler 36 One and All) also caught a good measure of fresh water yesterday but expressed concern that Britain’s Susie Goodall, sailing her Rustler 36 DHL Starlight, has been making up ground on his position. Uku is expected to reach the BoatShed.com Hobart film drop some time between 27-28th October with Goodall a couple of days behind.

Susie, who has been worried about dwindling water stocks in recent weeks, got more than she bargained for at the weekend after leaving one of her deck hatches open during a downpour. “I got more water in the boat than at any time during the race and now everything is wet,” she told Race HQ today.

Sixth placed American/Hungarian Istvan Kopar (Tradewind 35 Puffin) is also making good progress, 7 miles behind Finland’s Tapio Lehtinen (Gaia 36, Asteria), but continues to be plagued by niggling problems. Without a working SSB radio, he cannot pick up commercial weather forecasts nor the accurate time signals required for celestial navigation. He’s relying on a wind-up clock instead. This past week, everything seemed to get on top of him when he messaged: “ANOTHER DAY IN GGR WHEN I MISS MY FAMLY & HOME TERRIBLY & QUESTION MY SANITY.”

At the back of the fleet Russia’s Igor Zaretskiy and Australian Mark Sinclair appear to be competing to see who can make this global adventure last the longest. Now some 5,000 miles behind Race leader Jean-Luc Van Den Heede, they have been going nowhere fast in recent days and face having the shadow of Sir Robin Knox-Johnston’s virtual Suhaili overtake them. Both have stayed resolutely north of the Roaring Forty latitudes since rounding the Cape of Good Hope and are only now biting the bullet and heading southwards towards the westerly air-stream.