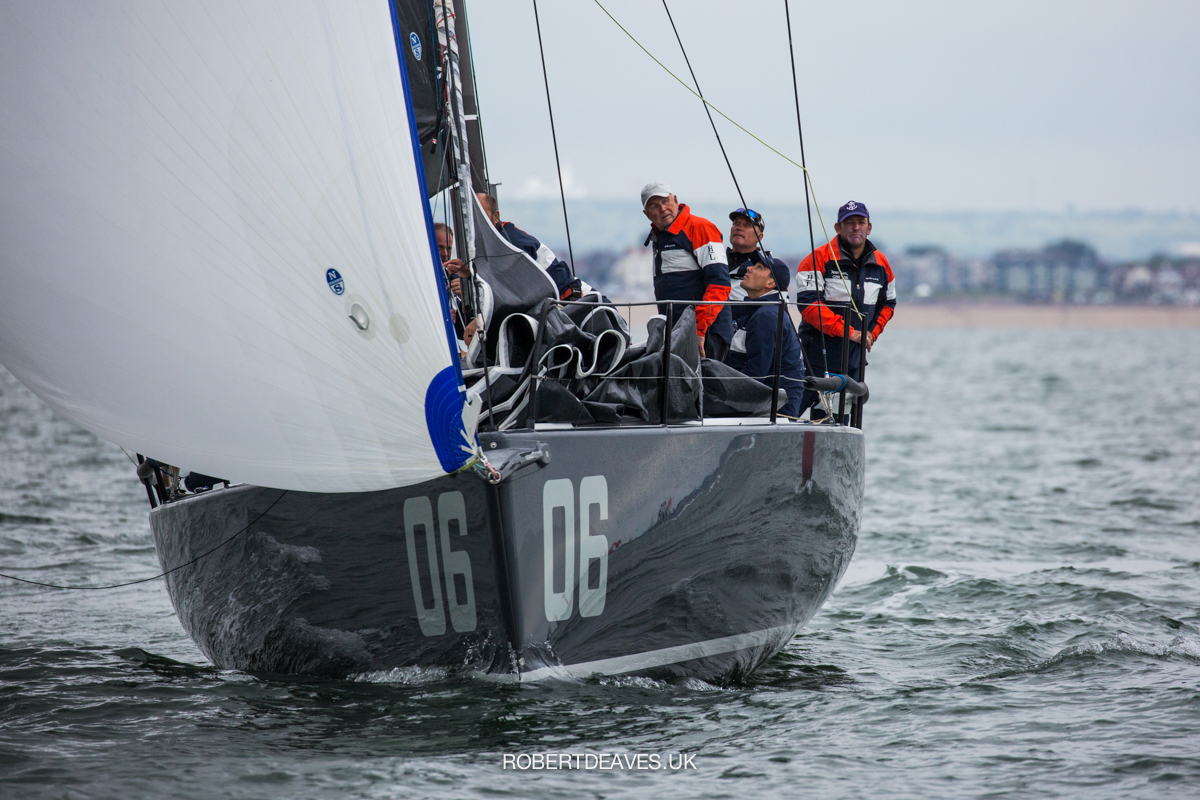 eter Morton’s Jean Genie had the best of Day 2 of Round 2 of the Fast 40+ 2021 Race Circuit, part of the RORC IRC National Championship in Cowes, Isle of Wight on a very grey day, with flat water and light winds.

Jean Genie won the first two races of the day to draw within one point of Niklas Zennstrom’s overall leader Rán going into the final day.

Final race winner, Christian Hamilton/Guy Gillon’s Khumbu, is only one point behind Jean Genie, setting up an exciting conclusion for Sunday.

The great British weather continued to dominate. After too much rain on Friday, Saturday dawned with a lack of wind and a one-hour delay. Finally, three windward-leeward races were held in a very shifty 6-10 knots of breeze that gradually shifted through 50 degrees as the day progressed.

With a following tide, everyone pushed the line in Race 4 of the event, none more so than Peter Morton on Jean Genie, who was OCS and had to restart. However, after rounding the top mark in fourth he “sniggled down the middle of the run” to lead by the first gate.

Everyone was almost overlapped at the ebb tide top mark. After this they built a comfortable lead to take the race win from Khumbu and Ed Fishwick’s Redshift.

Race 5 followed a similar pattern except Jean Genie led at every mark for her third race win of the series, this time from Rán and Khumbu.

The last race of the day was dominated by a 40-50 degree right shift on the first beat, involving some frantic mark moving, but again Jean Genie led at the top.

Unfortunately, the crew chose the wrong leeward gate mark and let Khumbu and Rán through at the other mark. Nothing changed on the final upwind downwind with Khumbu securing her first win of the event to set up a thrilling final day with just two points separating the top three boats.

Ben Cornish, from Jean Genie, explained their day, “Good day for us on the Genie. It was really tight racing within the fleet and some tricky light conditions. The day was hard for the decision makers onboard and a really neat job by the blokes calling the shots.”

“[David] Lenzy and Jules [Salter] did a fine job finding the pressure and sticking the boat in the right place on the course. The handling crew did a solid job too, so everything really clicked nicely today.

“It’s very enjoyable sailing days like today when things just happen. Everyone is getting more hours in positions on board and that is showing, which is really nice.

“Points are very close before we go into the final day and two races in what looks like a fairly light wind finale.”

“I approached Team Silva Neo when they were sailing in the class, and they took me for a training day at the end of 2016 and then asked me afterwards to become a fixed member of their crew. I’ve done all the events with them afterwards and since then I had made enough contacts to stay in the class.”

Clasen is a great fan of the pro-am setup as well as the detailing needed to get the best out of the boats.

“The pro-am model gives young and less experienced sailors the opportunity to learn from professional sailors. I especially enjoy the attention to detail and frequent adjustments required to keep the boat going fast. I also enjoy the ongoing development of the boats.”

Joy Fitzgerald has been sailing in the Fast 40+ class for four years, previously sailing on Mark Rijsk’s 42 South and then with Christian Hamilton and Guy Gillon on Khumbu, before joining Rán at the end of 2019.

“I was invited to join Rán after filling in for someone else during the 2019 Nationals,” said Fitzgerald, who brings a lot of both offshore and inshore experience to the team.

“My dad is a professional sailor, so I started keelboat sailing aged 12 on the west coast of Scotland. From there, I went on to complete a short-handed Transat at 17, and subsequently completed a further six transatlantic races.”

She has also competed in major offshore races such as the Fastnet, and Caribbean 600, as well as winning the RORC offshore series skippering a Class 40.

“My inshore race experience includes multiple Maxi and Swan Worlds as well as club racing on the Solent,” Fitzgerald said.

On board Rán, she is responsible for the pit, “So I basically make sure everything goes up and down at the right times.

“For me, the combination of technicality, forefront design and high-end performance makes this class stand out from the rest in the UK. With the power to weight ratio being similar to that of a TP52, it really does provide the most performance orientated sailing, right on our doorstep.”

Racing concludes on Sunday with two more races scheduled, though the light wind forecast is quite challenging.