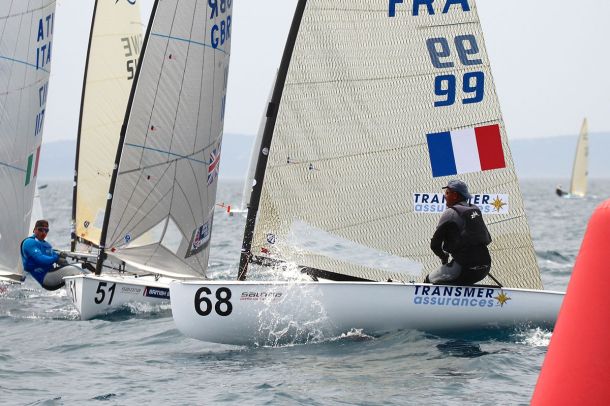 For the first time this week, Ivan Kljakovic Gaspic (CRO) has taken the lead at the Finn European Championships in Split, Croatia. Josh Junior (CRO) has dropped to second while Vasilij Zbogar (SLO) remains in third but has considerably closed the gap on the two leaders. Race wins on Saturday went to Giorgio Poggi (ITA) and Jake Lilley (AUS).

The medal race on Sunday will be a showdown for both the junior and senior titles. Two juniors have made the medal race in fifth and sixth places, with Arkadiy Kistanov (RUS) holding a six point lead over defending champion Jake Lilley (AUS). Meanwhile, Kljakovic Gaspic holds a two point lead over Junior, insignificant assuming the medal race is actually sailed, which is not guaranteed given some of the forecasts.

With a range of forecasts for today, the Finn fleet set out prepared for anything. In the end the early moderate wind softened for the first race before strengthening for the second and then disappearing for the third. It was a day of everything.

Generally the left proved to be favoured, with a strong adverse current making the upwinds very long. Five years ago when the Finn Europeans was last held in Split, Marc Allain des Beauvais (FRA) led round a top mark after hitting the left hand corner. He did the same again today in race 8. The President of the French Finn class and Grand Master left 70 other Finn sailors in his wake as he confidently sailed to the left while those around him consolidated and tacked away. It paid off as he rounded the top mark with a nice led and sped off downwind with the current. He was followed by Giorgio Poggi (ITA) and Björn Allansson (SWE). Allain des Beauvais maintained his lead downwind and also up the second beat, while Ed Wright (GBR) moved up to second. The final downwind was decisive with Poggi and Allansson both finding some pressure to sail round the Frenchman for first and second. Kistanov kept his Junior title hopes alive after snatching a fourth place finish from Wright.

The overall lead changed hands at this point after Kljakovic Gaspic crossed 11th, while Junior could only place 21st, which he had to count. The wind increased for the second race with Oscar up for free pumping downwind.

Despite an eighth place in race 8, Jake Lilley (AUS) knew he still needed to do something special to stay in touch with Kistanov, and also to make the medal race. He did exactly that in race 9, to lead from start to finish, extending downwind to record a great win. Wright was second at the top mark ahead of Zbogar, but Zbogar got the better of him on the second upwind to follow Lilley down the run. He took second place from Wright in third. Behind them Junior had a better race to cross fifth with Kljakovic Gaspic in seventh. Kistanov placed eighth to keep the pressure on. The points at the top were starting to get quite close.

The start of race 10 was beset with problems, with a shifting, and dying wind and then a general recall. After a problematic week, Oliver Tweddell (AUS) finally showed some of what he is capable of and came off the pin end with speed to launch into the left hand side and lead into the top mark with a nice lead. The current at the top mark caused the sailors many problems, firstly in laying the mark and then in getting to the spreader in one piece. But the writing was already on the wall, as the race was soon abandoned when the wind switched off. Racing for the day was abandoned shortly after.

It was a welcome conclusion for both Junior and Lilley who were both really deep after encountering problems at the top mark. Lilley said, “I did more spins between the top mark and the offset mark than I normally do in about five regattas. It was pretty crazy.” So they go into the medal race with a fighting chance to take the titles. Junior has to beat Kljakovic Gaspic and stay eight boats ahead of Zbogar to take the title. Gaspic just has to beat Junior. In the Juniors, Lilley has to put two boats between himself and Kistanov to retain the title.

Zbogar will also have his work cut out to stay in third. He was quite surprised to be doing so well. He explained. “From the first day I felt really bad. I had a high temperature and headache and I was not competing, I was just sailing. On the second day I was thinking about quitting the championship, but have so many people helping me, so I said I would try to continue, and since then every day has got better and better. I did not think I would come this high into the medal race, because the first five races were all over tenth place, but I was trying to sail my best.”

“Yesterday, could have been even better if I had felt better. I had excellent speed upwind and but I was sailing very conservatively. The last five races were excellent.”

“The last race today was very tricky. For me it was a good race. I was around 12th at the top and Josh and Ed were far behind, and it would have helped me a little to to be closer to the leaders, but now I can only really keep third place.”

“These last two days were extremely difficult for all of us. The conditions were really tough, a lot of upwind and a lot of pain in the kegs, so I think everything is very tired.”

Poggi said of his race win. “I was lucky today, but it was nice to win. I had really good speed. I went to the left with Marc and Björn and we came back from the left with some decent pressure. The second upwind was little bit closer, as Filippo [Baldassari (ITA)] got closer and Ed passed me on the right. But I was sailing really nicely downwind. Just before the finish I kept to the right a little bit and got past, but there was really only a boat length in it. It was really close.”

“Marc sailed really well. He was sailing really fast. To be first at every mark is not so easy.”

“Overall I am happy with my week. The second race today was not too bad, but I lost a lot on the second upwind. And I was third in the last race, but it was impossible to finish that race. Next year I need to have a better start to the championship, because I started really badly this year.”

Tweddell was philosophical about the lost chance, but it summed up the week for him. “Sometimes that's the way it goes. I think for the majority of the fleet it wasn't a great one for them so probably a fair one to get abandoned.”

“It's been a tough week for me. Some people have good speed this week and have been racing well, and also keeping low risk, but I just haven't been sailing well enough, and without speed you can't play the game. We'll change a few things before the next event at Delta Lloyd.”

In contrast his team mate Lilley has had a great week. “The race win was very pleasing. I had good speed and came off the boat end and drag raced the top guys, sailed the two lifts into the mark and extended on the first downwind and then did a good jib covering on the second upwind. I did enough to hold Vasilij off on the last downwind, so it's really pleasing to get a win and do what I had to do to move into the medal race.”

On the Junior title, “I haven't really thought too much about the Juniors this week. There doesn't look like theres going to be much wind tomorrow but if we get a race off then I don't think I will try anything special.I'll just try to have a good race and see how the cards fall.”

Junior summed up the situation. “Whoever wins the medal race should win overall, so it should be a fantastic race. I've never been in this position before so it should be good fun. I've done a lot of match racing so maybe it will be useful. Or maybe I'll get schooled. Whatever it'll be fun.” Junior is the New Zealand Match Racing Champion, so knows a bit about match racing, but tomorrow we'll see if he can apply it to the Finn.

The medal race is scheduled for 12.00 on Sunday, with the final race for the rest to be held as soon as possible afterwards.