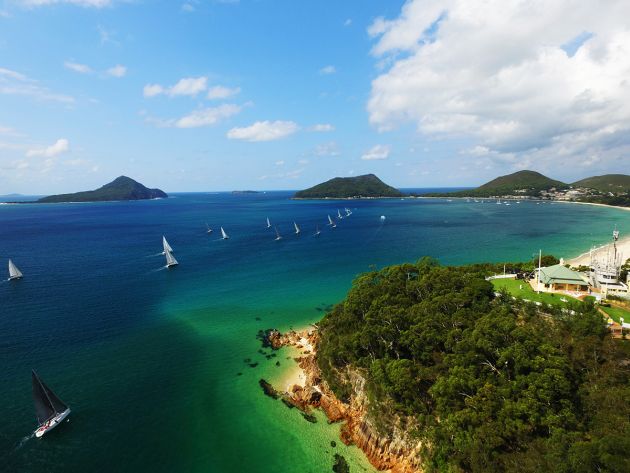 “Our handicap was hammered overnight so this is a lovely surprise,” said Skelton on receiving the news of his win and subsequent series lead on countback. “We sailed a really solid race today, we worked hard all day. It wasn’t a race that suited the Beneteaus, they are more windward/leeward boats, but we had one of those races where we started well and carried on.”

Jab, sailing for the Wangi Amateur Sailing Club on Lake Macquarie, is the division 1 series defender and Skelton reckons the competition is even tougher this year.  Another good result will penalise their performance handicap overnight, putting even more pressure on the crew to close out the series tomorrow.

The Commodore’s Cup precedes the business end of the week, headlined by the NSW IRC titles which have drawn a heavy-hitting starting list.

Younger and the less experienced crew, such as Tom Braidwood’s seven year-old son Eamon, are very welcome to join high calibre boats like Quest, Bob Steel’s Mat 1180 racer, for the cruisy Commodores Cup. In yesterday’s offshore race a tiny baby enjoyed a nap strapped to mum in a baby carrier. When the IRC series gets underway however, most opt for the most experienced and athletic race crew to swing into action and try to earn the owner a state title.

Karma Randall, a year 10 student racing at Sail Port Stephens while on holidays from Newcastle Grammar, is only 15 but already has 10 years’ sailing experience, and the option to switch up from cruising mode to super competitive mode. On Friday she’ll change boats, from working the bow and calling tactics for the ‘Skirts’ all-women crew on the cruiser/racer Schouten Passage in the Commodores Cup to her dad’s slippery Farr 40, Good Form, for the prestigious IRC series.

Randall’s love of sailing yachts offshore is so great that one day she wants to take on the sport’s toughest event: “I am inspired to do a Volvo [Ocean Race] one day… that’s a big goal,” she admitted dockside at d’Albora Marina Nelson Bay after racing.

Overnight there’s a big task for the young foredeck hand to complete. Not studying the weather for tomorrow’s tactics. Not working with the rest of the crew on her Macbeth essay for school. She’ll be applying matching Henna tattoos to each of the crew of 10, a tribute by the Newcastle Cruising Yacht Club crew marking the final day of Commodore’s Cup racing.

Tomorrow morning at the 1100hrs race briefing at Broughtons on the Bay, most of the seven skippers from the original series who have continuously supported the regatta over nine years will be acknowledged by organisers.

The forecast for Wednesday April 12, 2016 is S-SE 10 – 15 knots, reaching up to 20 knots offshore north of Norah Head in the morning and winds turning easterly in the morning. Race officer Denis Thompson will make a decision in the morning whether to send the fleet out into open waters or run another inshore race.

The Junior Off The Beach Series begins tomorrow out of Port Stephens Aquatic and Sailing Club.