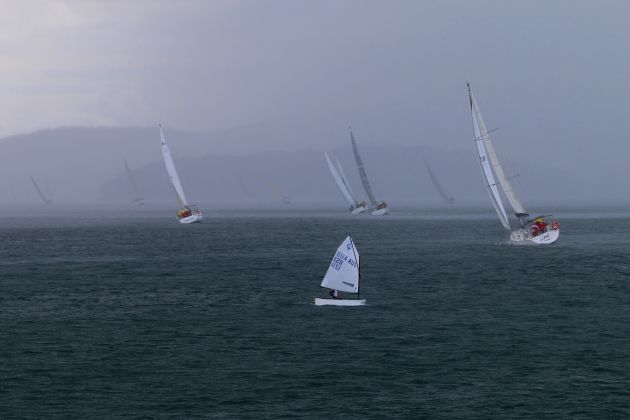 It wouldn’t be a Sail Port Stephens without a downpour and the Commodore’s Cup fleet contesting the final of their three-race series copped a drenching amid sunshine, rainbows and tricky winds ranging from zero to 10 knots and west to east.

Predominant sou’westers influenced by the cloud cover finally went to the sou’east when a rain squall drenched Nelson Bay. In the aftermath things were very dicey and the option of a shortened course was tossed around. The predicted sou’easter slowly filled in with a little confidence before trending east, creating wind holes and bringing the fleet in to the finish at an amble.

On successfully defending their 2015 Commodore’s Cup win Skelton said, “It was all about chasing the pressure today. We can’t complain about two years in a row!” He was proud to be named and shamed for bringing about two general recalls and the threat of a black-flag start for the third attempt, “old Laser sailors….we can’t help ourselves. We’ll be back next year!” he promised.

Division 2’s top tier was tight but it was Geoff and Penny Dilworth’s two wins on corrected time with their Dufour 34 that earned the Gosford sailors the divisional trophy. A countback separated Even Finer from Peter Lewis’ Jeanneau 37 Lu Lu Belle in second.

“We were one of the smallest in our fleet and we do well in light weather, plus we were a bit lucky today,” Dilworth said on being advised of the final result. “It’s the best result we’ve in four years of coming to Port Stephens. We are really pleased.”

Lewis is one of the Sail Port Stephens ‘lifers’ who has skippered his boat in all nine regattas and the best he’s finished is fourth. “I think the interview on NBN did it, we told them we were elite athletes then we felt we had to live up to this tag,” he explained.

After a quick shower and change following a late finish, most Commodore’s Cup crews are off to the PSASC this evening for the black tie & boardies Beach Ball and final trophy presentation celebrating the series’ completion.

The two-day Junior off-the-beach series began off Port Stephens Aquatic and Sailing Club (PSASC) for 20 plus Open Bic and Optimist dinghy sailors. Cruising along the perimeters in his Flying Ant was dad Adam Beashel, a former Team New Zealand America’s Cup team member, keeping an eye on his two boys, video here. When the juniors weren’t racing, and when they were, there was plenty of calling out and a fun water fight with bailer buckets in between starts.

Tomorrow, Thursday April 14, closes out the junior pointscore while the bigger boat crews enjoy a layday break in the schedule, an opportunity for sightseeing, a dolphin cruise, or maybe a long lunch in the nearby Hunter Valley or along the stunning Port Stephens foreshore.

Also racing over the three days are the MC38s, Super 11, sports boats and performance cruising and racing fleets.