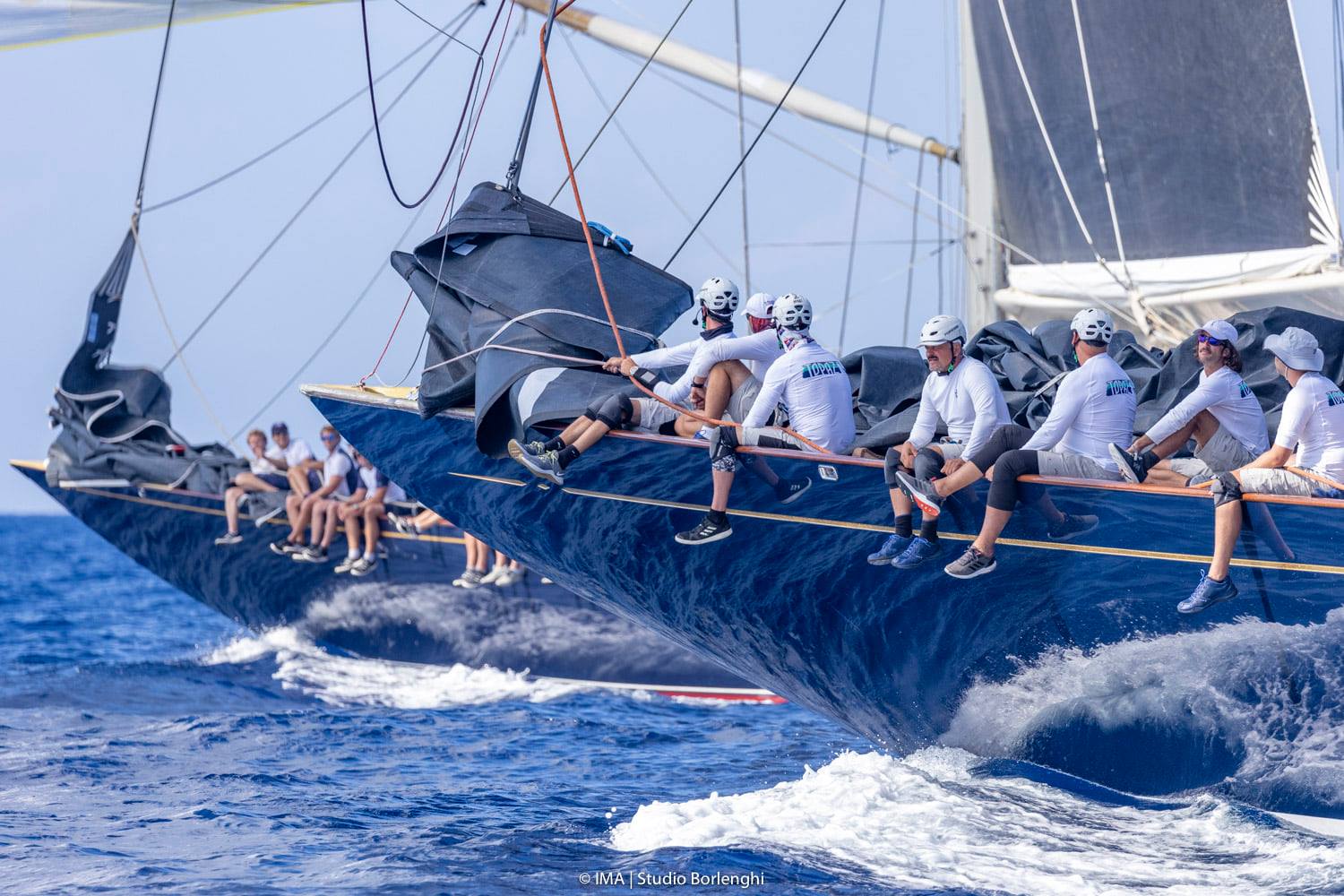 “It is always close between these two magnificent boats and great racing,” said Timmy Kroger on the rivalry between Topaz and Velsheda. Pic - IMA/Studio Borlenghi.

The enduring, friendly rivalry between J Class duo Velsheda and Topaz will resume on October 5-9 at the famous Les Voiles de Saint Tropez regatta in the south of France.

The crew of the Frank C. Paine designed, 2015 launched Topaz are seeking a measure of revenge after being beaten last month by a dominant Velsheda crew at the Maxi Yacht Rolex Cup in Porto Cervo, Sardinia.

Racing for the J Class yachts at Les Voiles de Saint Tropez is under IRC handicap in a six boat IRC 2 division up against such diverse designs as the Swan 82 Kallima, the 32.9m Wally Green Eyes, the 33.83m Dubois designed Silvertip and the Swan 80 Umiko. In 2019 Velsheda won the class, but Topaz was absent after a technical issue which surfaced in Porto Cervo curtailed their season.

As usual the courses at Les Voiles de Saint Tropez are all coastal routes chosen from 10 different options, distances being between 20 and 40 miles. They are always a test of accurate navigation, anticipating the many transition zones and wind shifts around the bays and headlands and very much an acquired taste compared to windward-leeward racing.

“It is always close between these two magnificent boats and great racing,” said Topaz’s Timmy Kroger. “We won one race against them [Velsheda] in Porto Cervo which was nice, but here again they have a small advantage under IRC. It is nice to win one every now and then. It will be hard for us, but we will give them a good run.

“On board both boats we have a similar set up with the same crew for – in our case – five years. They are missing a few Kiwis who cannot travel, but on both boats it is like a family and it is always great to get together and race each other.”

Francesco d’Angelis is again sailing on Topaz as tactician. “He fits into our set up very well, very smoothly. His style of operation as a tactician is perfect for us and his level of experience second to none,” reflects Kroger.

“One of the big challenges at Saint Tropez is other boats, there are so many and so you always have to be on your toes and looking out. You have to be switched on all the time to race here. But the wonderful thing here is about being part of this huge festival of sailing and now being in the old port on the dock is really special.”

Jules Salter, the English navigator who is a Volvo Ocean Race winner and TP52 World Champion, is looking forwards to sailing on Velsheda again.

“We had a little advantage in Porto Cervo but it was always close, there was never any let up. You would get a little bit ahead and then look back and it seemed like they were coming back at us all the time. The racing was just fantastic. Without doubt it is some of the most enjoyable racing I have done and I imagine it will be the same in Saint Tropez,” commented Salter, who recalls sailing on the 1933 designed Velsheda as a 15 year old on the Solent.

“To be honest I cannot remember too much about it other than the size and power of these boats which is unlike anything else I have sailed in the last 30 or so years.”

With the news that the refitted Ranger was doing sea trials and some crew training a couple of weeks ago off Newport RI with a team, there are high hopes that next year will see a return to stand alone J Class racing under the new, purpose developed J Class handicap rule.

“We are looking forwards to that. It is a little frustrating to have this great rule developed and sitting on the shelf, so hopefully we will have some more boats coming out racing soon,” said Kroger.