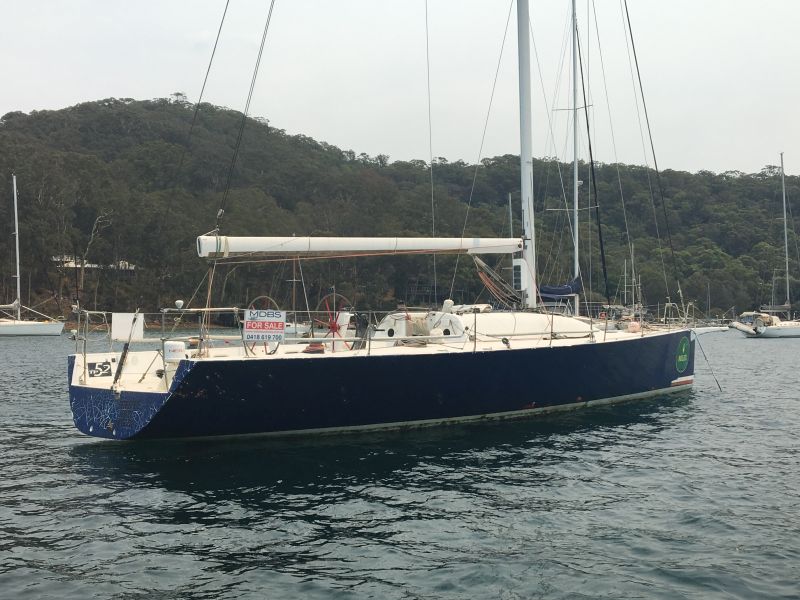 Welcome to a new series that will see us take you through the search, purchase and restoration of the world’s first TP52.

For those that don’t know us, Annika and I are avid sailors and both commercial skippers. We run Ocean Crusaders which is dedicated to cleaning the oceans of the world.

Annika grew up sailing in Sweden and moved to Australia to dive, however found sailing again in the Whitsundays where she drove boats for Island Dive, which later turned into Whitsunday Catamarans.

I, on the other hand, grew up playing cricket in Victoria before taking up windsurfing which later turned into yachting when the body couldn’t do what I wanted it to do anymore. I launched Ocean Crusaders by breaking the Around Australia solo yacht record in 2010.

In 2015 we got married in Sweden and bought a cheap Gibsea 43 in Croatia and sailed it home via Gibraltar, Atlantic Crossing, through the Caribbean and Panama Canal before crossing the Pacific. The entire trip home we wanted something faster. Whilst cruising at 6 knots is fine for many, we both like speed and as we both like to race, we always dreamed of converting a race yacht to a live-a-board Racer/Cruiser. Now please note the way I wrote that. Racer comes first. We don’t need lots of comfort on a yacht, after all cruising you are meant to live outside and in the ideal world shower on the deck after a swim every morning and afternoon.

The biggest issue we have is that I am 6’4 (192cm). So, in any race yacht, head height is a real issue. I like to be able to stand up in a yacht comfortably. My head (slightly balding) is full of scars from hitting my head on light fittings or bulk heads. Our sailing friends have offered to take 2 inches out of my legs which might be a cheaper option in the long run!!!

We have been searching for our ideal project since the time we sold our last boat back in 2017. We have seen many cruising yachts come up that needed work and race boats overseas but nothing seemed to align with when we had time to look at things, or do deliveries. Time was running short as Ocean Crusaders was getting busier and busier and we even launched Ocean Crusaders Sweden last year so Annika now spends 2-3 months in Sweden every year.

So one Friday night in January, I am once again searching through the yacht sales websites when I come across a TP52 for sale for $30,000. I was in a bit of disbelief. I actually emailed the broker and asked if it was the right price and if so, I’d be seriously interested. The advert simply said it needed new sails, new engine and new deck. Even still I thought the price was good considering it had a full carbon rig and boom. This was a perfect scenario for us as the original TP52’s had a bit more headroom to start with.

Saturday morning and I missed the call back from the broker, however he left a message mentioning the price was right, but there was plenty to talk about. I text him later that evening and said for him to call me when he felt like it. I didn’t expect him to call me on a Saturday night or a Sunday. First thing Monday morning I got a call from him. Within 5 minutes of chatting I was sending the deposit.

On the Thursday we flew down to Sydney to check it out. We were greeted with a 42 degree day as we drove from the airport to Church Point. We were picked up and taken to the boat which was on a swing mooring. I’m not a huge fan of swing moorings as the boats on moorings never seem to be as well maintained as those on marina berths. I do however understand why this was on a mooring. They hadn’t been using the boat for quite some time. In the clear water you could see huge growth on the hull. The boat was wrapped in vinyl and was cracking, hence why the boat looks pretty poor in the pictures.

We were left to our own devices on the boat and we walked around with me doing a bounce test on the deck and finding lots of soft spots. Yep, the advert was correct, it needed a new deck. The rig and boom looked sensational, the harken deck gear was in good, but sun affected condition and all the rope bags were ready to be scrapped. Sitting in the sun with no maintenance certainly isn’t good for much in this world and this yacht was certainly showing signs of that. The mooring line had also been chewing away at the bow and the bow sprit.

Downstairs and it was like they literally walked off the boat. There were half empty water bottles everywhere and the stench of mould was unbelievable. We knew it needed a new engine but soon found out that the boat had had about a foot of water in it at some stage. All the batteries were disconnected so no bilge system operational. And the sail inventory was a delivery main, jib and an old A4.

Yep it was in pretty poor condition but Annika had fallen in love with her. Later that day we checked out a Jeanneau 53 at the Spit and it was in fairly poor condition as well, although not as bad as this. The price tag of $295,000 and plenty of work needed just made J-Bird III more appealing. Yes we could’ve moved on to it straight away but it wasn’t our perfect boat as it didn’t have race performance.

On February 10th we took ownership of the boat and our next mission was to find out how to get it to Brisbane. That story will be in Part 2 of this blog series.

So now a bit of history about the boat. Back in 2001 a new model was created by Alan Andrews Yacht Design specifically for the Transpac Yacht Race from San Pedro, California to Hawaii. There were two built at the same time, exactly the same. One was called Victoria 5 (Now V5 in NZ and has a canting keel) and was built in Dencho Marine and ours was built at Westerley Marine and called J-Bird III. The original owner was the now late David Janes and his wife Donna.

In her early days she won many races including first to Hawaii in the Transpac, winning races in California, and also Mexico. It soon became known as Flash before being sold to Sam Chan and shipped to Hong Kong where it won many races as Ffree Fire. It came down to Australia in 2011 to compete in the Sydney to Hobart with an all Hong Kong team but failed to finish when the mast track parted from the mast. The timing is a bit sketchy but I believe it has had a mast and keel upgrade, possibly back in 2005 but information is scarce. In 2013 it was under new ownership here in Australia when it entered the Sydney to Hobart once again, this time failing with what I believe was mainsail failure. Since then we are pretty certain the boat has not done much at all.

So with two failed Hobarts, will it be third time lucky in 2021? Stay tuned to our progress by following our page at www.Facebook.com/JBirdIII (That is Roman Numerals for 3, hence three capital i’s.)