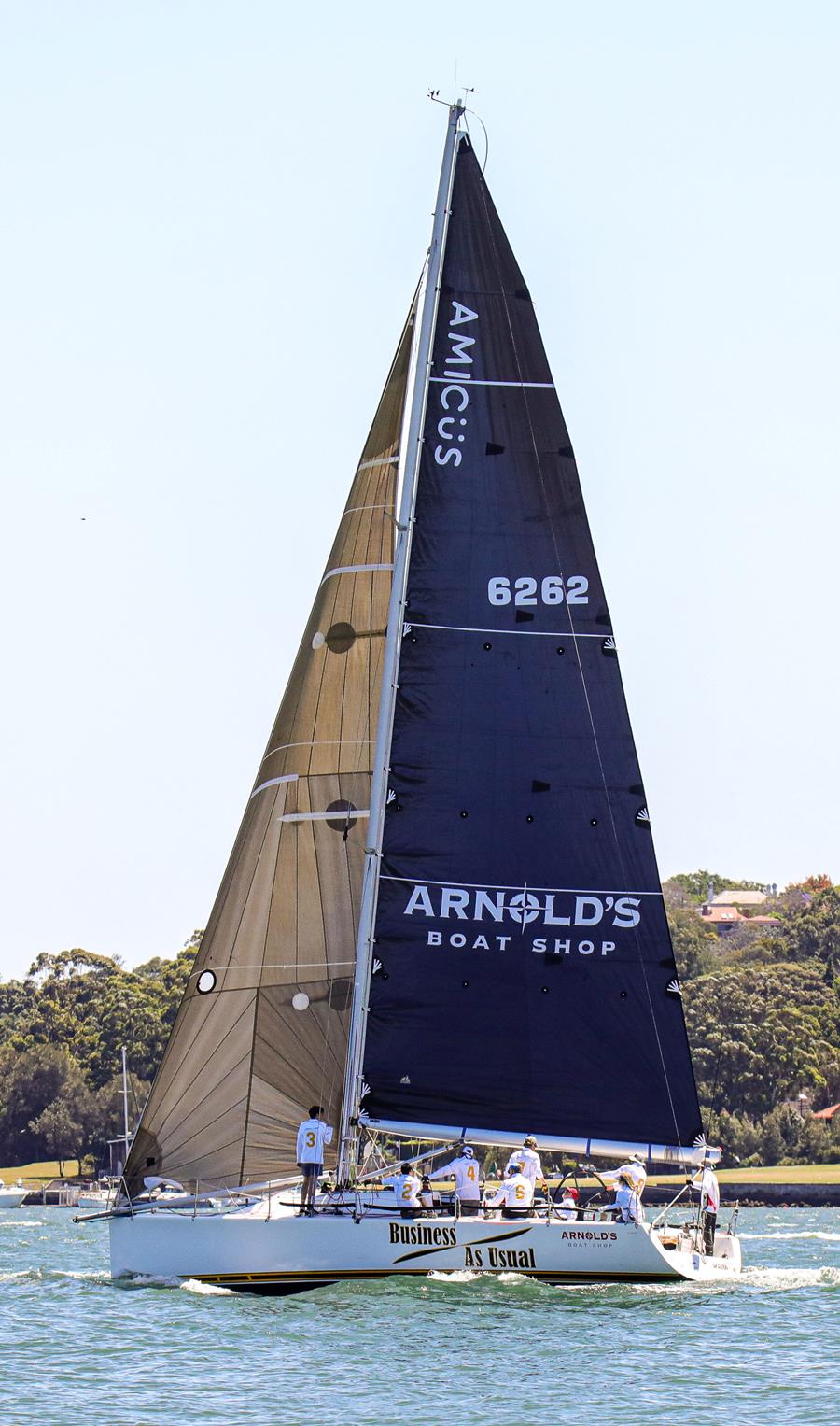 Business as Usual getting down to brass tacks. Photo CYCA.

It might have thrown others for a loop, but the sale of their former boat, and the arrival of their new boat not expected until February, has not stopped Paul Glynn and Mattijs Willenborg from racing in the Cruising Yacht Club of Australia’s (CYCA) 75th Sydney Hobart Yacht Race.

The two sailors, exclusive licensees to produce and market the JPK 10.80 and JPK 11.80 in the Asia Pacific, say they formed another plan, and it has come off, much to their joy.

“Our dream was to get a JPK 11.80, but that was not going to be possible until early 2020, so we had a chat about Plan B,” Willenborg remembers. “We found an unloved Sydney 40 on the Swan River in Perth, and that was an occasion for celebration, because our Rolex Sydney Hobart dream was back on the agenda.”

Along with Glynn and Willenborg, Terrance Brooks and Marcia Moulton purchased the former High Anxiety II, a Sydney 40 Cruiser/Racer, and renamed her ‘Business as Usual’. It was out of the water for three months while the syndicate gave the boat a total refit.

In October, the two formed a solid relationship with the CYCA, signing on as naming-rights partners for the Club’s 2019/2020 JPK Pacific Two-Handed Pointscore Series.

“We’re elated and thankful to have JPK Pacific join the CYCA family,” CYCA Commodore Paul Billingham said at the time.

“We believe two-handed sailing represents the future for some sailors. We think the two-handed division is going to add a few more boats to the Rolex Sydney Hobart fleet for 2020 and beyond too,” he said.

Two of the four two-handed races have been sailed so far, and Glynn says, “The next two races are in February and March next year. They will act as qualifiers for the 2020 Noakes Sydney Gold Coast Yacht Race and the 2020 Rolex Sydney Hobart when we will see two-handed racing in both events for the first time.”

Glynn is now looking forward to the upcoming Rolex Sydney Hobart. “Then it will be the 2020 Sydney Gold Coast and Sydney Hobart races which we’ll being doing fully crewed, the latter two on our new JPK 11.80.

“There will be other JPK sailors doing those two races two-handed,” says Glynn, who has 11 Sydney Hobarts to his credit, including some with the 2002 and 2008 Rolex Sydney Hobart winner, Bob Steel.

“The great French yachtsman, Jean Pierre Kelbert, is founder of Europe and the UK’s most successful overall IRC yachting brand, and JPK is thrilled that short-handed sailing is on the rise in the Asia Pacific.

“JPK made it a hat-trick this year with wins in the IRC Double-Handed division of the 2019 Rolex Fastnet, the gruelling Rolex Middle Sea Race and the Transatlantic race, not to mention second to Courrier Leon in the 2015 Sydney Hobart,” Glynn finished.

Back on the CYCA’s 628-nautical-mile race, Willenborg states: “We have no delusions of grandeur in regard to this Sydney Hobart. We will compete and arrive at Constitution Dock whenever – hopefully before New Year’s Eve – then the dream will be fulfilled.”