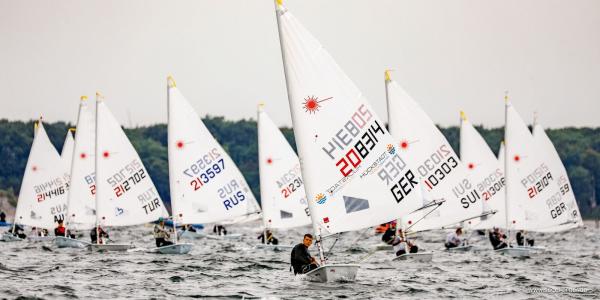 Four titles were won at the Laser Radial Youth World Championships in Kiel, Germany, and pointedly, three of them went to Italy, with one to Britain, sailors spoilt with all types of conditions from strong to light, shifting winds.

“Therefore, those sailors who can handle all conditions rose to the top,” explained Eric Faust, President of the Laser Class Association.

“It's wonderful – a dream has come true,” new world champion (U19), Matilda Talluri from Italy, said on winning the Girl’s title. She had been a bit nervous at the start, since the top of the fleet was very close on the point score.

For Alex Schonrock (Great Britain), placing 17th in the last race was enough to win the title in the U17 girls' fleet. Giorgia Cingolani (Italy) and Eline Verstraelen (Belgium) took Silver and Bronze respectively.

Guido Gallinaro (Italy) started well. Although he was only leading the Championship for the Boy’s gold medal by one point, he still just concentrated on his own race.

“I gave my best,” Gallinaro said. “I have been waiting to win this title.”

Finishing 22nd in the final race, Josh Armit (New Zealand) had enough in the bag to claim the silver medal, with Francesco Viel (Italy) winning Bronze.

In the U17 Boy’s, Cesare Barabino (Italy) won the title, with Tom Higgins (Ireland) and Michal Krasodomski (Poland) second and third respectively.

After he took the lead after the start, Barabino dominated and won the race to claim the title. Higgins, who had led until then, finished third and missed Gold by one point.

Competitors sailed 11 races across six days in Kiel. Only one race was sailed on the final day, as the wind was dropping all day. “We had everything to offer, all sorts of weather and sailing conditions,” Head of Organisation, Dirk Ramhorst from the Kiel Yacht Club, said.

With almost 400 sailors from 45 nations it was an important event for the Laser class and for the sport. “No matter whether the sailors will later be sailing in Olympic classes or the Americas Cup, they have spent some time in the Laser,” Faust said.