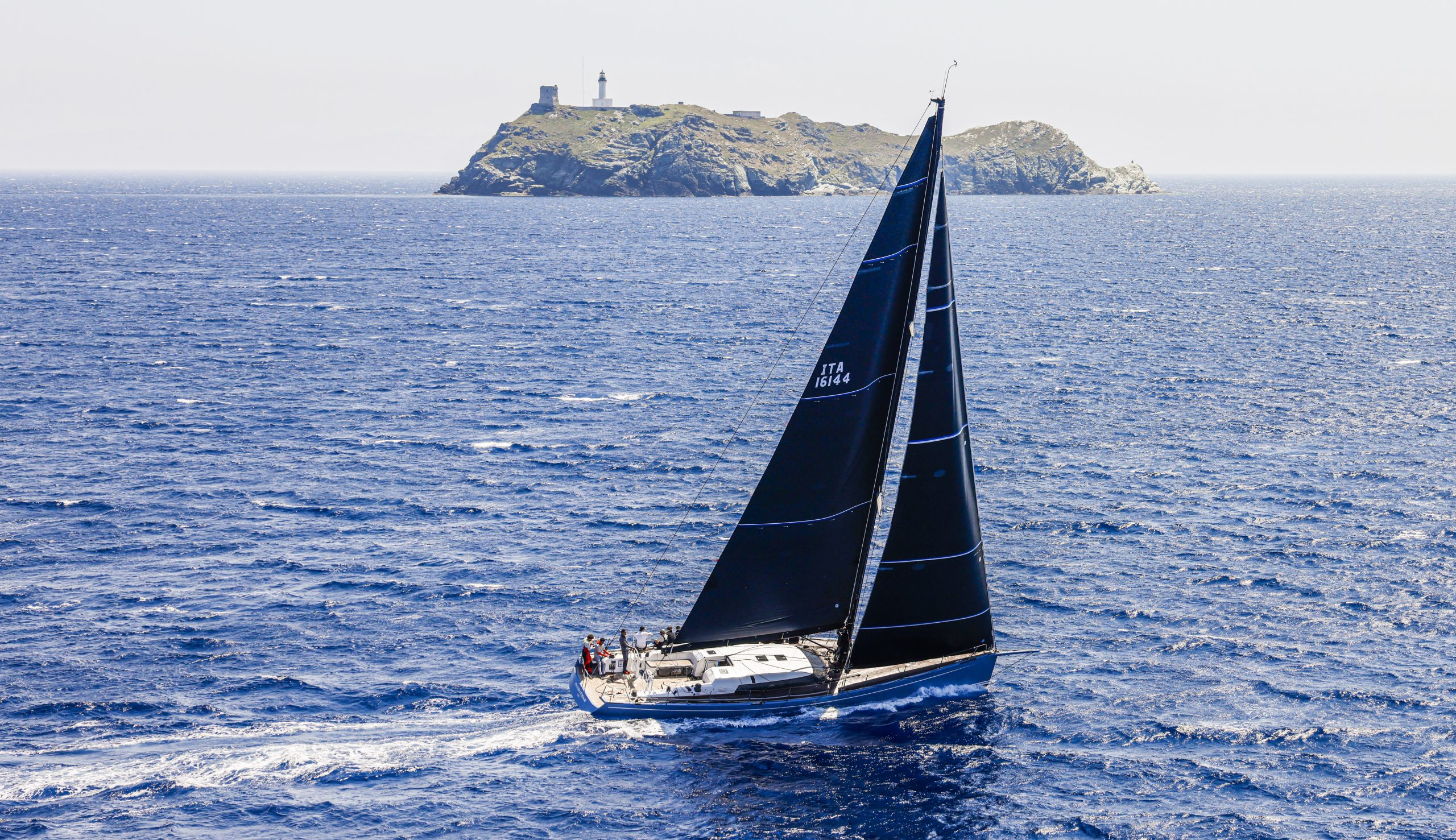 During the race, wisdom was being imparted to them by their tactician, America’s Cup and Olympic legend, Tommaso Chieffi. They also had the benefit of Ambrogio Beccaria, series class winner of the 2019 Mini Transat. He was the famous transatlantic race’s first ever Italian victor.

Rolex Giraglia was a race of intense highs and lows for Itacentodue. Chieffi summarised: “We made a couple of very costly mistakes early on when we went too close into the shore, especially off Monte Carlo which cost us three or four miles. But Ambrogio Beccaria, our navigator, then did an excellent job catching the shifts and finding good pressure.

“We were an hour behind our fleet; and we popped out an hour and a half in front.”

This leapfrogging occurred on the upwind leg towards the Giraglia Rock and was partly thanks to their timing – the boats ahead of them were becalmed while Itacentodue was able to find more consistent pressure north of the rhumb line. At the Rock the wind pipped up to 27 knots providing an enjoyable final leg to Genoa.

Chieffi said he enjoyed racing with the young crew. It reminded him of his first Rolex Giraglia in 1982 when, aged 20, he drove Raul Gardini’s maxi Il Moro di Venezia to victory.

For Wallyño, the race started slowly. A block broke just before the start causing them to cross the start line bare headed. They also suffered when they got stuck in almost no wind for three hours on the way to the Giraglia Rock.

De Froidmont noted that Itacentodue had managed to avoid the wind hole: “Off Cannes she was 10 miles behind us. We didn’t see her in the night, but she went straight and later was 10 miles ahead of us!”

Wallyño’s saving grace was keeping the breeze as she sailed into Genoa, while many other boats ahead were becalmed.

“The competition was fantastic with Lorina. We stayed together for all of the race – it was great fun,” said de Froidmont, their result righting their 2019 Rolex Giraglia race when their race had been destroyed by an interminable park up off the finish line.

There was some consolation for the Lorina 1895 crew which claimed the third step on the IRC 0 podium while there was a very good result for Luigi Sala’s Mills Vismara 62 Yoru which finished fourth in one of their first offshore races.

Having a sticky race was Márton Józsa’s Hungarian crew on Wild Joe: “We were trying to avoid the forecast windless areas, but we didn’t really manage it,” Józsa admitted.

“We stopped for one hour completely in no wind. After the rock, it was a very good run for us, and we could use our DSS foil.” With this the Reichel/Pugh 60 hit a top speed of 27 knots in 28 knots of wind. All was going well until Wild Joe was becalmed again for 1.5 hours.

Another maxi boat match race was taking place between old friends and foes.

Carlo Alberini on his newly acquired Davidson 69 Pendragon VI and Alessandro del Bono on his newly refitted Capricorno, a Reichel/Pugh designed 78ft ILC maxi and Sydney Hobart winner, originally campaigned by Hasso Plattner as Morning Glory went hard at it. Both owners have had long histories campaigning one design keelboats.

Del Bono said that the boat proved very fast upwind in 15 plus knots, but they had suffered on the way to the Giraglia Rock.

“It was very tough during the night when we were close to the Giraglia. The wind was going from 90° to 140° and back every half an hour. Finally, it settled at 130 degrees, and we had 25 knots. We were so happy, surfing downwind at 18-19 knots.”

While the boat belongs to Del Bono’s father, well known Admiral’s Cup winner Rinaldo, she was in storage for more than 10 years and only recently did Alessandro recommission her in order to sail it with his own 18-year-old son, also named Rinaldo.

On board were many of the crew from the successful Capricorno Admiral’s Cup campaigns. “The average age on our boat is around 55, which must be another record,” Alessandro observed.

Among them were many stars of the America’s Cup and Volvo Ocean Race, such as Flavio Flavini, Stefano Rizzi and Matteo Plazzi.

Many of the maxi fleet, including Pendragon VI, now move on to August’s Palermo-Montecarlo, the fifth and concluding event of the International Maxi Association’s 2020-21 Mediterranean Maxi Offshore Challenge.