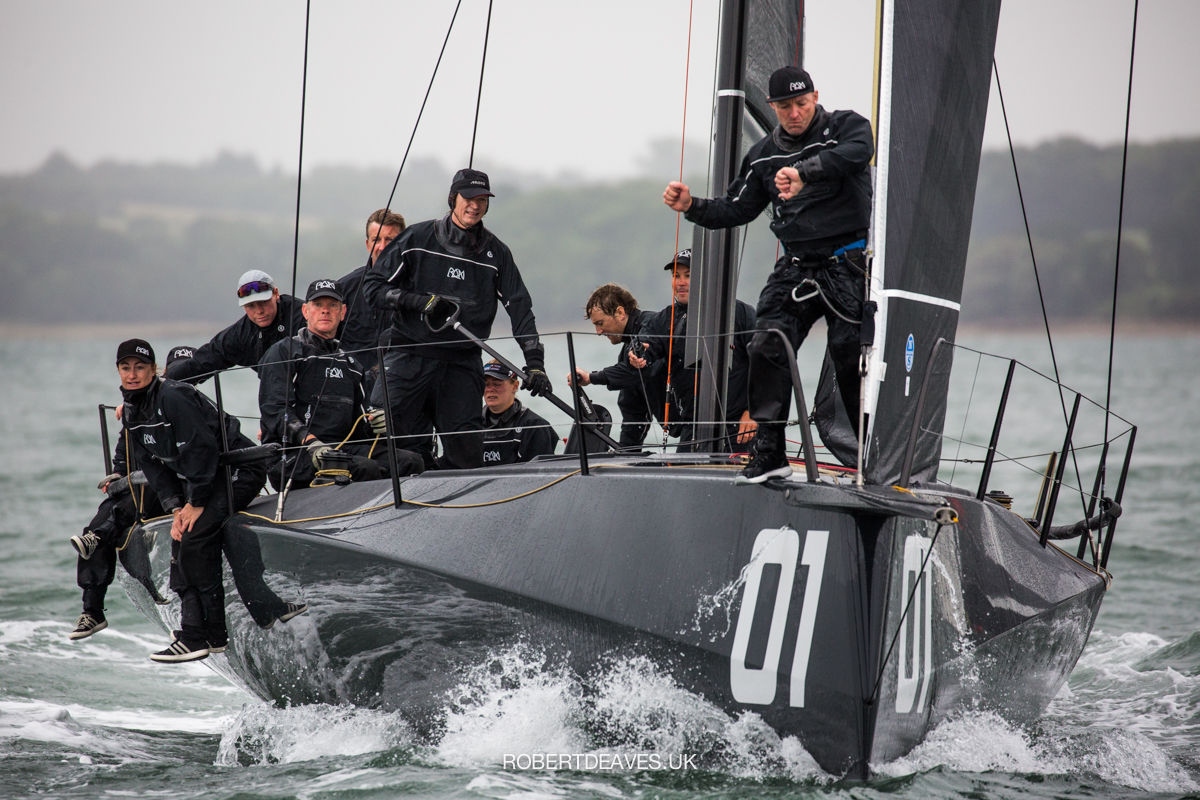 Ran is in the box seat - Robert Deaves pic

After weeks of tropical, perfect conditions, it was a grey, wet, cold and pretty dismal day on the Solent with incessant rain and bad visibility, however the competition was as usual very close and red-hot.

Two windward-leeward races were followed by a very long round the cans race in some quite abysmal weather with visibility down to a few 100 metres due to heavy rain.

Rán had the best of Race 1, leading round the top mark from Khumbu and Redshift, and though Rán led all the way, she closely covered Khumbu up the second beat and with Jean Genie making a late move, the final run was very close between the top three.

Khumbu was the early leader in Race 2, from Rán and Jean Genie, but everything changed downwind with Jean Genie rounding the gate first in an increasing tide, with the top four boats almost overlapped. She led up the second beat and then extended downwind while Rán fought to overcome Khumbu, passing her at the final mark to cross in second.

The final race of the day was a long round the cans race lasting over two hours and in a slightly increased wind of 12-15 knots. Rán hoisted her Code Zero first out of the reaching start and led all the way.

Hannah Diamond has been racing on Redshift since 2019. On today’s racing she said, “Today can only be described as a classic day of British yachting. We had a good day on the water, and despite being fourth we are pretty happy to be holding on to the back of the faster Fast 40s around the course.

“Racing in a northerly is great fun, really shifty and tricky which keeps the racing fun right until the end and we’re looking forward to more tomorrow.”

Diamond got involved with the team after sailing with the Redshift crew on their Sunfast 3600 after finishing the 17/18 Volvo Ocean Race.

“I was looking to do some more UK based racing. I’ve known Nick Cherry, the boat captain, for a long time. We did the Middle Sea Race in 2018, and the program involves a good mix of both inshore and offshore which is perfect for me.”

On the inshore races, she works the runners and does the strategy, “…which I really enjoy. A mix of trimming and decision making suits my dinghy sailing background.”

The experienced yachtswoman said, “The pro-am model allows younger sailors to join the class and learn from more experienced sailors but I also like it because I can sail with my brother who has been sailing his whole life but chose not to follow the professional sailing route so it’s nice we can race competitively together.”

Following some extensive modifications to the boat over the winter, she says, “We are seeing some great benefits offshore with the winter modifications but it is certainly more challenging to sail the boat inshore. The Fastnet is the goal for this year so inshore racing for us is about refining some of the systems and manoeuvres in order to be better for that.”

“These boats are a great size, particularly for the Solent. We had a great time racing with six people last year on some of the RORC events, but also fully crewed inshore racing is really good fun so it’s rare that you can get such a versatile boat that you can take offshore but then have some competitive Grand Prix style racing inshore.”

Sam Carter only started sailing Fast 40s in 2020, with the coming together of team Khumbu, and they are making their presence felt on the race course.

“It was a great, albeit long and very wet, day on the water. We had three good races and it was super shifty and today was all about constant gear changes to stay quick. We were really pleased with how the team gelled – clean, fast and super tight racing – a good day.”

“I have done a lot of sailing over the years with Christian (Hamilton) and more recently with his business partner Guy Gillon. The idea was to create a fun and focused team and to learn lots and develop our racing with Khumbu.”

Carter is the boat runner trimmer, a new role for him. “It’s totally new for me but I love the technical aspect of trimming and doing runners. It provides a good link in with the mainsheet and trim 1 whilst allowing me to get the head out of the boat and input to the tactician, so a good mix and a new set of skills to learn.”

He also sees the huge benefits of the pro-am setup on the boats. “I think this has been a huge positive so far – it’s fabulous to sail alongside guys at the top of their game. The chat is entertaining, and you learn so much by watching and doing (and listening).

“There is always a noticeable calmness in their approach. I like to think they enjoy sailing with us amateurs even if it means having to put up with answering stupid questions. They also take on a real coaching role in different zones of the boat – which I think makes for a tight team as we learn together.”

“Sailing a Fast 40 downwind at close to 20 knots is pretty epic. Super dinghy like, tight racing, really rewarding boats and a great atmosphere.”

Round 2 of the Fast 40+ 2021 Race Circuit is being held as part of the RORC IRC National Championship in Cowes from 18-20 June.