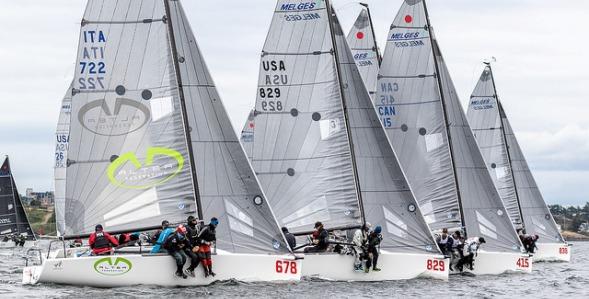 Victoria, Canada: After two days at the 2018 Melges 24 World Championship, in which there was more waiting than racing, the winds today allowed for the 41-boat fleet to complete three more races to increase the tally to five races.

Full report from the Melges 24 Class
The first victory of the series today went to the home-players Canadians on board of MiKEY CAN838 by Richard Clarke: “We won the first race of the day, probably the one with the trickiest conditions since the wind was still filling in, and we are very happy with this result,” he said.

“Our philosophy has always been that of dealing with what we have, being consistent and not trying to chase rainbows: today it worked out particularly well.

We’ve been training on this race course a lot and this for sure gave us a massive advantage because the conditions of Victoria Waterfront are tricky, with big shifts and heavy currents: in any case, a little bit of luck is always needed and we’ll see what happens in the next days. We’ll try to be conservative and consistent.”

In the remaining two races of the series, the Italian entry, Altea ITA722, already winner of the only race of yesterday, set the pace to all the fleet, scoring two bullets in a row and hence gaining the leadership of the provisional ranking.

Helmed by Andrea Racchelli, the Italians take control of the standings with a margin of six points over WTF USA829 by Alan Field and fourteen points over Monsoon USA851 by Bruce Ayres.

With daily partials of 9-12-5, Brian Porter’s Full Throttle USA849, the leader after the first two days of racing, slips in to fourth position, tied with just one point of margin to Richard Clarke’s MiKEY CAN838 that completes the provisional top-five.

Matt MacGregor’s Good Enough USA806 maintains the leadership of the Corinthian division, with a good advantage over the Canadian entry ADHD CAN184 of Brad Marchant, second in the ranking reserved to non-professional sailors, and on the representatives of the hosting entity RVYC, on board Mike Bond’s Hold My Beer CAN591.

The show of the day was to witness a family of killer whales coming to the race course and event to the Victoria harbour. Race Committee was forced to postpone the race because of them having they playground on the race course for a while. Also the Marine Aerodrome has been shut down due to the fact that the wales came also to the harbour, what has not happened before here.

Tomorrow will be a penultimate day of the Melges 24 World Championship 2018 here in Victoria with a first warning signal scheduled at 11am. With one additional race sailed the discard of the worse result will apply playing the cards in the total scores.