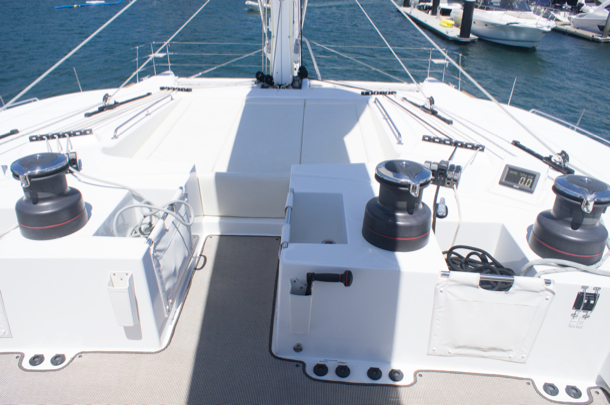 Plenty of room forward of the steering bridge for lounging and working the halyards and sheets.

Once again Lagoon has had its 620 catamaran designed by Van Peteghem and Lauriot Prévost (VPLP).

With an extensive list of successful racing multihull designs to its name VPLP are now just as well known for racing monohulls (Comanche for example). The Lagoon 620 may be designed and built as a cruising yacht for long-distances but it is going to provide a faster passage than you may be familiar.

On our test day we had ten knots of boat speed in under 20kts of breeze with one reef in the mainsail and the short foot jib unfurled. Naturally, as is the advantage of multihulls, nothing slid off the tables.

Three permanently fixed furlers sit up forward ready to increase your sail area depending on wind strength and angle.

All sail trimming, halyards and sheets, are controlled from the bridge deck and sitting up on that vantage point makes you feel in complete control. We sailed around Sydney Harbour in the middle of several twilight races without any concerns. It may be a large slab-sided hunk of fibreglass but it manoeuvres easily even with just the small jib up front.

If there was any sniff of trouble the owner had opted to up the twin Volvo Pentas in each hull to 110 kilowatt engines from the standard 80kW. The engine rooms are just aft of the back saloon deck and allow you to climb down into them to work on the engines. The propellors are both aft of the rudders to keep them turbulence free. Due to the engine rooms being outdoors and with the solid hatches closed, engine noise is minimal and does not bother those sitting in the aft saloon deck. Each engine has its own fuel tank of 650 litres.

Construction of the hulls is what you are looking for in a boat that promotes itself as a transocean passage maker. Infusion-moulding used in the hulls is for good weight to strength ratios, which is important for a multihull as it does not have the same inherent structural strength of a monohull.

All cabins are so large it is difficult to decide which is considered the owner’s cabin. In the review yacht the skipper’s cabin had a larger head/shower cabin than the master, in the Lagoon brochures this cabin is designated the VIP Suite!

The two aft cabins provide direct access to the back deck and the owner’s cabin has a private sitting area. All berths have side access and plenty of storage space.

Every cabin is a double berth except the six cabin has one double bunk. Each cabin has its own separate head and shower.

This Lagoon 620 is a redesign from 2012 with in-house designers discussing with both VPLP and interior architects Nauta Design. The end result is not only a faster boat but one with a brighter interior and an easily navigable layout.

In the dining room for example, the settees have been entirely redesigned, as well as the ceiling, enabling better indirect lighting via vertical windows for sun protection. There is also an option of installing adjustable blinds on all the wide vertical windows for enhanced privacy.

But it is outside and upstairs where this boat truly shines. For those a bit sun-shy, the large aft deck is fully covered with a solid bimini. This hardtop, of course, provides the flybridge where the sun seekers can relax and spread out to their heart’s content.

It is a massive space where people can sit behind the twin steering stations or in front where the sail trimming winches are situated or even in front of that in the full sun on the lounge deck.

In an open swell the catamaran will come into its own. From the high vantage viewpoint the twin hulls will keep rocking to a minimum, providing an all-day pleasurable ride.

As you would expect on a boat where the beam is more than 50 per cent of the length overall, walking around the decks is easy. The shrouds are pinned at the hull/deck join and the cabin top is over a metre high to give excellent security when under way. The forward trampolines between hulls and centre beam are bigger than the kid’s trampolines back home.

If the weather gets inclement then you can either leave the skipper up on the flybridge or steer from inside the saloon. Meanwhile the partygoers can continue on the back deck. Day lounges circle the large dining tables and access to and from the main saloon is simple to where the galley awaits. Or just use the wet bar.

The galley is fully kitted out with various options to expand as desired. It runs the length of the saloon area but open at both ends providing easy access from the back deck or even down below. With so much bench space, storage underneath is also not a problem.

There are four water tanks each holding 240 litres.

The Lagoon 620 has all the hallmarks of an excellent party boat wherever you park it. But with its design pedigree and builder’s construction history, its sellng point of being an ocean-going vessel must also be considered.