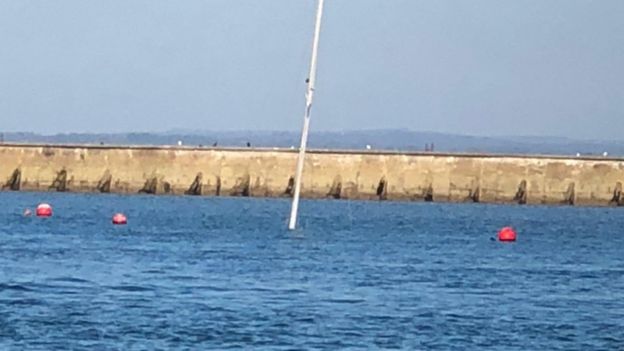 The mast of a boat struck by the ferry was visible in the water. Photo BBC News.

A ferry has hit several yachts and run aground off the Isle of Wight. The Red Falcon “came into contact” with a number of boats while trying to berth at Cowes Harbour, operator Red Funnel said.

None of the 40 passengers onboard were hurt, a spokesman said. The Coastguard confirmed nobody is missing or in the water.

A member of the public had called 999 reporting cries for help from within the harbour. However, this was someone “onboard his own vessel calling out to try and alert the master of the ferry of the situation”, the coastguard said.

The vehicle ferry, which left Southampton for East Cowes at 07:00, got into difficulty an hour later while entering the harbour in low visibility.

Passenger Ed Anderson, from Guildford, said: “We got into the harbour at around 8am. We were all in our cars on the car deck when we heard it run aground. The captain ordered us back to the passenger deck and we were given free breakfast and drinks.

“I can see the mast of the boat we hit sticking up from the water.”

Gwen Clayton was walking her dog by the water when the ferry ran aground. She said: “You could see a maximum five metres in front of you and I heard shouting and a sort of clanging, like a metallic sound. And then nothing.”