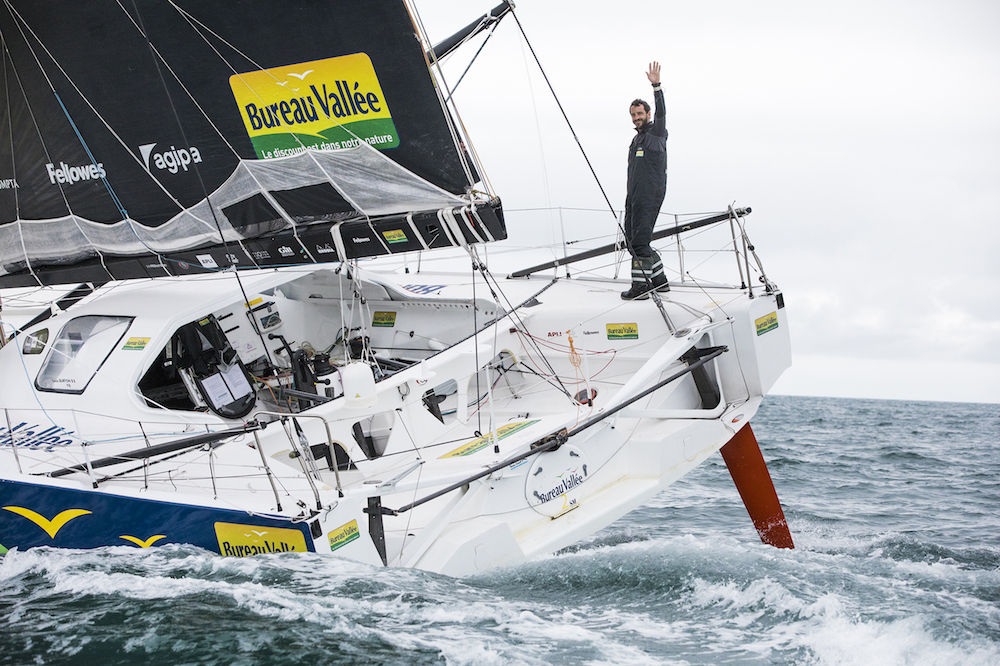 With ten days to go to the start of the Route du Rhum-Destination Guadeloupe, twenty IMOCAs are moored up in Saint-Malo in the Duguay-Trouin dock. Among them, the local contender, Louis Burton’s Bureau Vallée 2. At the age of 33, the sailor, who now lives in Saint-Malo, is getting ready to set sail in theRoute du Rhum for the third time, his second on an IMOCA. Previously an outsider, Louis now has a lot of experience and a boat that allows him to be up there with the leaders. We met up with him to find out more.

Louis, how do you feel about the final ten days of preparation on your home turf?
“It’s very encouraging to see all the Route du Rhum competitors coming here to Saint-Malo. We feel like we’re in the middle of the celebrations. The fact that we’re right by our premises is a real advantage in terms of logistics. It is easy for us to complete the preparation of the boat and we really feel at home here. I’m going to be able to stay at home until the day of the start. That is an ideal way to get some rest and calmly finish my physical and mental preparation.”

The delivery trip to the Route du Rhum pontoon wasn’t that long…
“You’re right. It was pretty simple! We are based in the same dock, so we didn’t even need to worry about going through the harbour gates.”

Why is this event so special for you?
“My first attempt at the Route du Rhum in Class40 in 2010, was the trigger to my life changing. That was my first transatlantic crossing, and indeed my first solo race. I didn’t have any sponsor, and the project was set up very quickly with the support of those my around me. I finally met my sponsor, Bureau Vallée, a month before the start, so it was at the last minute. It was the start of a fantastic story…That was also when I first met the lady who would become my wife…
“I feel I am in control of the boat when alone”

You’ve been sailing on Bureau Vallée 2 (the boat that won the last Vendée Globe) for a year and a half. How far advanced are you with the preparation?
“I have done a lot of sailing on her and I really feel I am in control when sailing her alone. I must admit it still feels a bit daunting when the boat is at full speed at night. I don’t know if I‘ll ever get used to that… We have made some sensible changes to Bureau Vallée 2 and she is now where I expected her to be in terms of preparation. She’s an excellent boat. Ideally, it would have been nice to have been able to work on her to be able to adjust the rake of the foils (the angle of incidence forwards and backwards). I still find it a bit hard sailing the boat upwind and that new adjustment would really help in that point of sail. But that change is going to have to wait.”

Why did you postpone that work?
“Our budget is a reasonable one and spread over four years, which means we are able to carry out work gradually. Next winter, we’ll do the work to be able to adjust the rake. Then, the following winter, we’ll build and install a new pair of foils, which will probably be bigger than our current appendages. That schedule is interesting, as it will enable us to have time to observe the shape of the new foils chosen by some of our competitors. We’ll be able to analyse the solutions that really work and then, make the right technical choices at the right moment. The idea is that we’ll have a boat in the best of shape for the 2020 Vendée Globe with the aim of making it to the top five.

“I intend to push hard and give it my all”

You have three new sails for the Route du Rhum: a mainsail, a J2 and a big spinnaker. Why did you go for those sails in particular?
“Up until now, I have been sailing with the sails used in the Vendée Globe by Armel Le Cléac’h. They more or less had the equivalent of two round the world voyages under their belt. Some had started to get a bit tired, in particular the mainsail. The standard is so high in the IMOCA class that you just can’t set off with sails which are not in the best of shape. They are a key element in terms of performance, and are the boat’s engine. It was obvious we needed to change the mainsail. The J2 is one of the headsails most frequently used on an IMOCA. As for the big spinnaker, that is a sail that is very important in the Route du Rhum, a race, which is largely sailed downwind. Next year, we’ll renew the other sails. Then, we’ll get a completely new set before the Vendée Globe.”

The line-up for the Route du Rhum is exceptional. What will your ambitions be when you set sail from Saint-Malo?
“Four years ago, I finished fifth, and I’d like to do as well as that. This time the competition is tougher (Twenty skippers are lining up, as opposed to nine four years ago – editor’s note) but I have an IMOCA that is really much better. This will be my second transatlantic crossing on this boat, but the first sailing solo. I intend to push hard and give it my all to try to finish well placed in Pointe-à-Pitre, and maybe even make it to the podium. The first three or four days will be key. It’s going to be important to be in the leading group, as it will not be possible to catch up. The start of the race is going to be vital. We’re going to have to make sure we’re in good shape when we set off.”