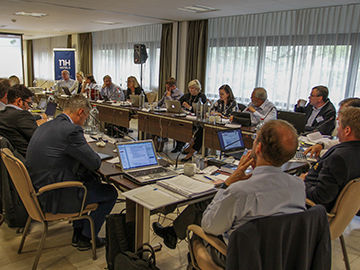 ISAF has held its mid-year meeting where issues of importance to the sport are discussed and decisions made. Here are a series of reports fromthe meetings:

An update was given on the Rio 2016 Olympic Sailing Competition and the upcoming test event.

The Aquece Rio – International Sailing Regatta 2015 is the second of two Rio 2016 Olympic Test Events with the first being held in 2014. Rio will welcome sailors once again from 13-22 August 2015 with racing taking place inside and outside of Guanabara Bay.

The first phase of registration closed on 1 May with 340 sailors, in 238 boats from 50 nations all set to compete on Olympic waters in advance of the Olympic Sailing Competition.

The Test Event will allow ISAF the opportunity evaluate and make key decisions in advance of making the final decisions that will govern the main event. Pollution was also discussed and it was agreed that flexibility across race courses was key.

Race courses in the shadow of Sugarloaf Mountain and in the watch of Christ the Redeemer will ensure these iconic features of the city and the athleticism and dedication of each Olympic sailor will be showcased side by side.

In terms of displaying the sport, Rio will certainly provide a perfect platform for the beauty of the sport to be promoted alongside natural and man-made wonders.

Plans to build an Olympic sailing marina in Tokyo for the 2020 Olympic Games were abandoned earlier this year as the organisers changed the original blueprint to cut costs and to reduce the impact of the airport on live television coverage.

ISAF is working closely with Tokyo 2020 to finalise the venue decision.

The Events Committee accepted the Equipment Committee recommendation on the Nacra 15 becoming the ISAF Youth Worlds multihull with the boat to be implemented and included as soon as possible. This isn't final yet, however, with submissions to go ISAF Council in November for final approval. But what is the Nacra 15? We caught up with Nacra Sailing's Gunnar Larsson to find out a little bit more:

Head of the ISAF Sailing World Cup, John Craig, gave the Events Committee an update on the World Cup.

Following a successful event in Hyéres, France just two weeks ago, the work continues to build up to Weymouth and Portland. London 2012 Olympic medallists will return to the venue of their triumphs from 8-14 June and it's shaping up to be an exciting event.

Many athletes have accepted their invitation based on the 27 April ISAF World Sailing Rankings release with the next step for qualification coming up at the Delta Lloyd Regatta. Spots across the ten Olympic events will be up for grabs in Medemblik, the Netherlands. For the Men's and Women's Kiteboarding and Paralympic events, the entry is open.

Looking beyond Weymouth and Portland, Craig presented the concept and proposal about a bus shipping service. Available to all competitors the aim of the bus is to provide sailors with container space to ship their boat and equipment to each World Cup venue.

A combined Notice of Race and Sailing Instructions (NoR/SIs) was published in advance of ISAF Sailing World Cup Hyéres to cover the remaining regattas on the 2015 series. The NoR/SIs was widely praised by the Events Committee. At each World Cup regatta a 'Round Sailing Instructions' (RSI) will feature information on the specific regatta ensuring consistency across the board.

Race Management, marketing and media, venue branding and sailor feedback was discussed with lots of positive comments coming out as the series adopts elite fleets.

The Working Party presented their proposal of the following events to be at Buenos Aires 2018:

This will be put forward to the ISAF Executive Committee for discussion and consideration.

ISAF Vice-President Chris Atkins gave an update on the upcoming 2015 ISAF Team Racing World Championship that is set to be held in Rutland, Great Britain in July.

Eleven nations will be represented in Rutland with 22 teams to race. A further 12 nations are considering entering teams so the number may rise.

The Equipment Committee met on Thursday 7 May at the ISAF Mid-Year Meeting in Amsterdam, The Netherlands. Some updates from the meeting are available below:
ISAF Youth Worlds Multihull Event Equipment Evaluation

At the 2014 ISAF Annual Conference in Palma de Mallorca, Spain, the Equipment Committee recommended the new Nacra15 for the Open Multihull event at the ISAF Youth Sailing World Championship.

At the 2014 Conference it was reported that the Nacra 15, “will be discussed at the 2015 ISAF Mid-Year Meeting in the Netherlands with the earliest possible introduction of the new equipment being 2018.”

A prototype was recently put through its paces at the recent Eurocat in Carnac, France. One of the big comments made was about the smiles on the faces of the young sailors that sailed the boat. High praise indeed.

It is expected that Nacra Sailing will be able to produce 4-5 Nacra 15s each week starting around November 2015, with a complete boat, ready to sell, expected to retail at 11,750 euros (excluding VAT).

ISAF Equipment Committee Chairman Kim Andersen (DEN) gave us an update on the evolution of Olympic Equipment and also explained about his background in sailing how he first started:

An update on the Rio 2016 Olympic Sailing Competition was given with specific focus on the equipment.

An update was given on the on-board cameras that will allow the TV audience a unique view of the racing in Rio. Smaller and lighter solutions have been presented and dummies and brackets will be available at ISAF Sailing World Cup Weymouth and Portland.

The Laser, Laser Radial and Men's and Women's RS:X sailors will receive supplied equipment at Rio 2016. The distribution of equipment will be shown publicly in order to increase the transparency of boat allocations.

The Equipment Inspection team were able to check boats the day before racing as if it was the first day of racing and allowed the team to report and equipment discrepancies before racing.

Hyéres had its challenges but personal safety, equipment limitations and sails were all checked and several boats were randomly selected to be weighed.

With the lessons learnt from Hyéres, ISAF Sailing World Cup Equipment Inspection will continue in Weymouth and Portland.