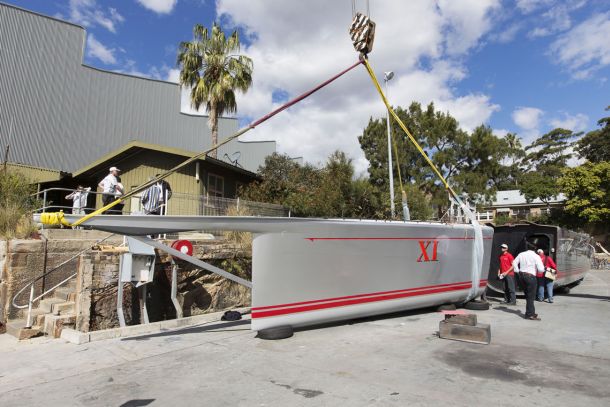 If yacht design is the art and science of teasing out performance through testing and refinement, then Wild Oats XI (WOXI) is a great study in how the starting point inevitably affects the direction of development.

In 2005 when Reichel/Pugh designed WOXI with her distinctively narrow hull, the International America’s Cup Class (IACC) monohulls had already type formed narrow canoe bodies. Under the IACC Rule designers could trade length and sail area against displacement. To get maximum length and sail area, maximum weight had to be part of the deal. However the location of the mandated mass was free, so more and more of it ended up in the ballast bulb at the bottom of the keel fin. With heavy keels (high ballast ratio) to provide righting moment, hull beam became redundant so the boats got narrower. Narrow heavy boats happen to have less added resistance in waves and are well suited to windward/leeward courses where moderate speeds dominate.

It is debatable how much influence IACC development had on the maxi scene. At the same time IMOCA 60’ designs were trending to lighter displacement and greater beam, exploring the ‘skimming dish’ philosophy well suited to reaching in heavy weather. Certainly the design and analysis tools developed for the IACC were applied to the conception of WOXI and her cousin Alfa Romeo.

Skipper Mark Richards was involved from the earliest stage of concept formulation: “The coastal racing we do, such as the Hobart, invariably includes upwind work and light airs. You can’t get rid of the wetted area of a wide hull when you don’t need it.” For the intended mission the team deemed keel mass superior to hull width as a way to generate righting moment.

The slender hull was suited to the Canting Ballast Twin Foil (CBTF) concept. This consisted of three appendages, all on centreline: A conventional aft rudder, a canting keel with minimal area consistent with supporting the ballast bulb, and a forward spade rudder. Both rudders could be set with a small angle of attack for straight line sailing with minimum leeway. More precisely, they could be set for best lift to drag ratio (in the drag bucket) with the hull sailing at a small but non-zero leeway angle, also studied to give optimum total lift to drag. For manoeuvring, the rudders could be opposed, enabling fast turns. They could even allow short bouts of ‘crabbing’ for tactical positioning.

One of the first major changes to WOXI was the deletion of the forward rudder in favour of twin retractable leeboards set outboard and forward of the mast. The principal advantage is both boards can be retracted to minimise wetted area downwind when sideforce is not required.

Upwind the windward board is retracted. The working leeward board is cambered (asymmetrical section), generating lift to windward more efficiently than a symmetrical foil set at some angle of incidence. Also, exiting the hull at the leeward bilge, it is in the middle of the heeled water plane, away from the free surface. Compared to the forward rudder, the twin boards are heavier overall. But they are placed further aft, reducing pitching moment. Arguably they are a more reliable solution, offering some redundancy, and doing away with a forward quadrant and related steering cables.

WOXI then sprouted another appendage in the form of a small fully retractable vertical foil under the foredeck near the bow. It moves the Centre of Lateral Resistance (CLR) forward when using foresails set on the bowsprit. Mark Richards: “It gives just enough lift to stop us going sideways in light conditions when we don’t need the full area of the main daggerboards.”

An interesting addition is a pair of small vertical fins on the ballast bulb, near the trailing edge. These are designed to interfere with and damp out harmonic vibrations set up by the bulb at very high speeds. Bulb design is a compromise: The ideal shape for high speeds is long and slender, but in light winds a shorter fatter bulb has less drag because it has reduced wetted area for the same volume. After several iterations with different shapes and masses, the WOXI solution is an intermediate shape combined with vibration dissipating fins. This hyper developed maxi reaches speeds that represent almost completely uncharted territory for big monohulls. Novel problems abound and they call for original solutions.

In 2013 WOXI was equipped with a Dynamic Stability System (DSS) foil. This retractable horizontal appendage deploys on the leeward side of the boat to generate vertical lift. In light airs it disappears into the hull, but when deployed in strong winds it pushes up on the leeward side, adding righting moment – in a manner similar to how the weight of the keel pushes down on the windward side. Being positioned ahead of the centre of gravity, it also supports the bow and reduces the effective displacement of the hull.

The system is still in testing, but indications are that in heavy reaching conditions it goes a long way to closing the gap with wider boats that generate power through hull hydrostatic and hydrodynamic lift associated with wide beam. Looking at the numbers is fascinating: DSS provides hydrodynamic lift at speed with no drag penalty in light airs. It does add weight that has to be carried in light winds, but so does a wider hull. So each solution has compromises and the net benefit depends on how the overall concept is integrated.

Improving performance is a war on many fronts. Most of the solutions we looked at so far are aimed at reducing hydro drag and generating lift (both vertical and to windward) in clever ways. But just as much effort goes into less visible improvements in structures and aerodynamics.

Mark Richards: “Our new mast has made a big difference. It is constructed with TPT [Thin Ply Technology – A carbon fibre laminating system, related to North 3Di. It yields better mechanical properties by using finer layering that provides more bond area between fibres and the resin matrix]. “The detailing of the rig is carefully studied to reduce windage in all the junctions (stay attachments, spreaders, and the like). Since the mast is stiffer and lighter, it requires less support, so our backstay system is also less draggy.”

WOXI is a hotbed of innovative thinking and testing. Each development flows from the core concept of balancing power against drag. A philosophy that centres on balance, with a tight focus on specific coastal races, is also evident in ergonomic choices. The powered systems onboard are seen by some as controversial. But they allow ordinary humans, older sailors, and guests to get maximum performance from the boat safely. Given the loads involved, and the intense nature of racing over relatively short coastal passages, stored energy for sail handling and appendage trimming is a justifiable choice.

For 2015, WOXI is getting major hull surgery. While the slender canoe body concept remains, the positioning of key elements will change. The front few metres have been cut off and will be replaced by a longer forefoot and foredeck. Some of the stern overhang will be removed.

Making the bow longer and the stern shorter effectively moves the rig back in the boat. This continues the trend of making the J longer (a trend started by continually extending the bowsprit over the first decade of development). All other things being equal, the longer J allows bigger foresails to be carried, adding sail area. Since the bow is longer, the bigger foresails do not come at the price of lee helm.

Carbon fibre construction allows remarkable freedom to ‘cut and glue’ hull, foils, and rig, with only minor weight penalties, even given the large scale and massive loads involved.

Also remarkable is the willingness of the WOXI team to commit to even radical changes when the data shows they will probably give better performance. The name of the game is building on an initial core concept choice to keep ahead of a variety of newer rivals.

Continually upgraded with big and small changes to get more performance, the direction of development follows from the starting concept, and each change is tested in racing before being built on further. A great example of the value of development through empirical steps.