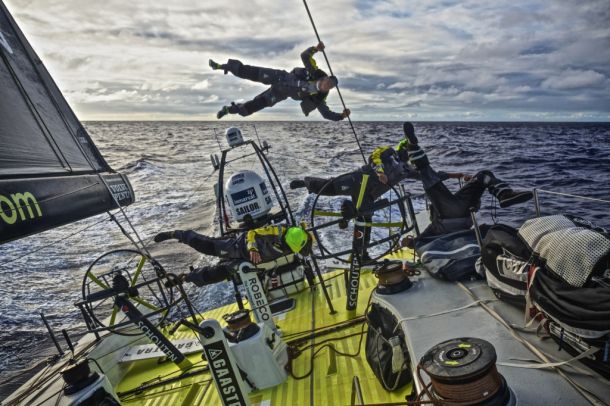 ALICANTE, Spain, Feb 20 – An incredible photograph from Team Brunel (Bouwe Bekking/NED) apparently showing three crew members suspended in mid-air as the Volvo Ocean Race Leg 4 leaders sped through the Pacific Ocean, has sparked a fierce social media debate: Is it faked or not?

The Dutch boat's Onboard Reporter (OBR) Stefan Coppers’ (NED) extraordinary picture (below) is, he insists, totally genuine and was set up and executed earlier this week. Remarkably, they carried out the stunt while leading the fleet during the 5,264-nautical mile (nm) stage from Sanya, China to Auckland, New Zealand.

The media team at Race Control opted at first not to publicise the picture because it looked too amazing to be true and only genuine photos are passed on to the media. However, a close examination by picture desk staff, plus the race’s photographic partners Getty Images, has ruled that it is genuine.

At least, they think so.

Particularly incredible, is the pose of the sailor apparently hanging on by his fingertips from the halyard in the middle of the picture: Lithuanian Rokas Milevicius.

Coppers, the man in the middle of the debate, insists that there was no magical post-production hocus pocus involved; just good planning and even better shutter timing.

So just how did Milevicius manage to get into such an extraordinary position with his boat surfing through the Pacific? Is he some kind of Superman?

“Rokas made a sling and I pushed down (on the shutter) at the right time,” wrote Coppers in a message to Race Control on Friday. “We took it in the leg from China to Auckland while we leading the fleet. By the way, we don’t need to be in the lead to have fun. Whether we’re first or fifth, as we were in the last leg, we are positive. Maybe this picture best shows how the guys are – 100 per cent pushing the boat all the time but in for a joke.”

Coppers added: “By the way: my granny* could have taken this picture, so credit should go to the athletes.”

Despite the shenanigans, Team Brunel still led the fleet by 27.1nm at 0940 UTC on Friday. The boats still have 2,265nm to go before reaching Auckland around the end of this month.