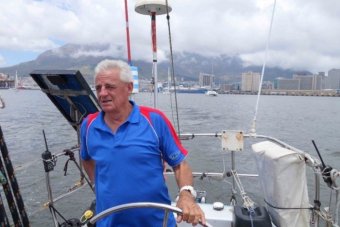 Jon Sanders broke world records in 1988 when he completed a triple circumnavigation of the world alone.

Twenty-seven years later, at the age of 75, he is still sailing and on Friday returned from his ninth journey around the world.

Sanders spoke to Geoff Hutchison on 720 ABC Perth from his yacht the Perie Banou II as he arrived in Fremantle Harbour.

His record for sailing round the world three times solo is still unbroken, but he said these days he prefers to take his journeys more cautiously.

In the years since he was greeted by huge crowds and international media in 1988, Sanders has continued to sail and also regularly sails boats across the Australian bight for clients.

“I go slowly but surely and it is easy and my boat is very manageable,” he said.