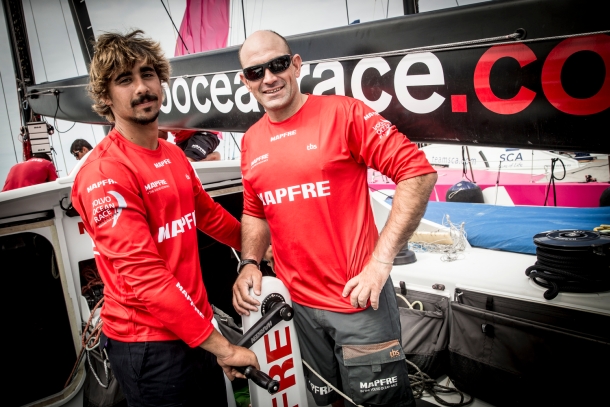 Guillermo 'Willy' Altadill, son of one of the biggest names in Spanish offshore sailing, has the chance to make his own reputation in the Volvo Ocean Race after being called up for the fourth leg by MAPFRE (Xabi Fernández/ESP).

The team has also announced that Iker Martínez, the Spanish boat’s skipper, will again miss the forthcoming Leg 4 from Sanya to Auckland to continue his pre-Olympic training in the United States. He also missed Leg 3 for the same reason.

Xabi, who won gold and silver Olympic medals with Iker, will again step up as stand-in skipper. Iker will, however, be returning for the fifth stage – longest and arguably toughest – from New Zealand to Itajaí, Brazil, through the Southern Ocean.

Altadill jnr., meanwhile, couldn’t believe his luck at being given his first taste of the Volvo Ocean Race at the tender age of 22, the second youngest in the current edition. Only Liu Xue (‘Black’), 21, of Dongfeng Race Team (Charles Caudrelier/FRA) is younger.

He will replace Anthony Marchand (FRA), who is missing the 5,264-nautical mile stage to Auckland to undergo dental surgery on a troublesome tooth that plagued him during the third leg from Abu Dhabi to Sanya.

“He’s (Altadill) young, has loads of passion, he’s Spanish, strong physically, is fresh and he’s going to give everything,” said Xabi.

Altadill jnr. will work as a trimmer and also do some work at the helm for MAPFRE plus the usual duties of a Volvo Ocean Race sailor.

“The Volvo Ocean Race is the ultimate event in offshore sailing. It’s what everybody wants to do as a child, so it’s very good to be here,” he said, shortly arriving in Sanya on Monday.

He added that he emailed his father, who is currently also competing in the Barcelona World Race, with the news of his call-up.

“When he was my age, he started doing the Whitbread, so he’s got a few stories from that and also the other guys from the same generation as my dad. We sail together sometimes and afterwards in a bar they tell stories about the Whitbread.

“It’s pretty funny to see the difference in the boats from when they did it – and it’s only 20 years.”

The fleet, still missing Team Vestas Wind (Chris Nicholson/AUS) which is being rebuilt after hitting a reef in Leg 2, departs for Auckland on Sunday for the fourth stage of nine.