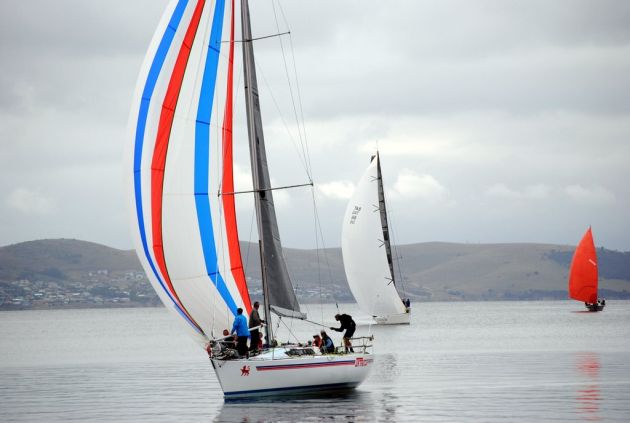 Intrigue takes line honours with The Fork in the Road astern of her. Photo Peter Campbell.

Calvert, who turned 80 last November, has successfully returned to yachting after a knee replacement last year – and an equally successful mast replacement for the locally famous 31-year-old timber yacht.

Intrigue also won the IRC division of the 89 nautical mile after her crew sailed an exceptional race in exceptionally light winds, from start to finish. This was Intrigue’s 10th rating win the Bruny Island Race, Australia’s oldest inshore/offshore distance race.

In a nail-biting finish in the lightest of morning breezes, Intrigue held off a determined late bid by former Olympic sailor Gary Smith in the powerful Bakewell-White 45, The Fork in the Road. Intrigue crossed the finish line off Castray Esplanade at 08:36:01 with The Fork in the Road finishing five minutes later.

In an even closer finish, the lightweight flyer It Happens (Mick Souter) took third place in fleet, finishing 13 seconds ahead of Peter Cretan’s Marten 49 Tilt. The first six boats, Intrigue, The Fork in the Road, It Happens, Tilt, Audere and Helsal 3, all finished in less than ten minutes.

Intrigue won the IRC division from Gary Smith’s Fork in the Road and Tilt. At one stage, the efficient Yellow Brick tracker system showed Intrigue in first place in all three handicap categories.

After a near windless early morning in the Derwent in which the fleet leaders, Don Calvert’s Intrigue and Ron Fisher’s Helsal 3, sailed slowly up the River Derwent just after sunrise, the situation began to change dramatically.

Four of the other bigger boats, The Fork in the Road, Tilt and Audere suddenly appeared on the horizon in hot pursuit, doing twice and three times the boat speed of Intrigue and Helsal 3.

Intrigue picked up some breeze from astern, mid-river and abeam of the John Garrow Light, enabling her to open up lead of more than half a mile over the then becalmed Helsal 3 which was, in fact, drifting back down the river.

Good tactics, with international sailor Julian Salter calling the shots, together with excellent helming and spinnaker handling by the crew, enabled Intrigue to outsail the bigger boats over the final hour of the race.

“I had a wonderful crew,” a weary but elated Don Calvert said after returning his former Australian Admiral’s Cup team yacht to her berth at the RYCT. “In particular, we had quite a number of the crew who are most capable helmsmen, important in such an extended race as this.”

Sailing with Don was his son David, who has skippered the boat a number of times in her Bruny Island races and wins.

“It all changed for us after we sailed through the Friars (the rocky outcrops off Tasman Head, the southern most point of Bruny Island) then astern of Helsal 3, The Fork in the Road, Tilt and Audere,” David recalled. “As we headed up the seaward side of Bruny, we saw The Fork in the Road fall into a windless ‘hole’ and then the others stopped, too. We sailed past them, avoiding the ‘hole’ and sailed up to Helsal 3 at Adventure Bay.

“In the light breezes we finally overtook Helsal 3 and were in front coming into the river,” David added. “It was hard work, but we managed to outsail Helsal 3 and hold off the late challengers as we sailed the last mile or so to the finish.”