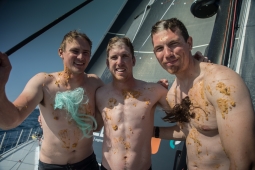 Charles Caudrelier's Dongfeng Race Team led the fleet over the famous line of latitude at 0941 UTC with the slimmest of leads over MAPFRE, Vestas 11th Hour Racing, Team Brunel and team Akzonobel. By 1126 UTC all five boats in the tight leading pack had crossed the Equator, the delta between them just shy of 18 nautical miles going into their ninth day at sea in Leg 2.

Turn the Tide on Plastic and Team Sun Hung Kai/Scallywag, in sixth and seventh respectively only 60 miles behind Dongfeng, are tipped to cross the Equator within the next few hours. With the crossing of the Equator came the offerings to King Neptune, the Roman God of the Sea. Ancient maritime tradition dictates that any sailor that hasn't yet crossed the Equator – known as a Pollywog – be inducted into Neptune's court by the Shellbacks, those onboard with crossings already under their belts.

The induction ceremony usually involves a certain degree of hair shaving while being covered in whatever slop the team have managed to concoct over the previous few days. Four days' worth of rotting freeze-dried food went over the heads of Dongfeng's Equator rookies Jack Bouttell and onboard reporter Jeremie Lecaudey, while Team Brunel's Peter Burling waved goodbye to his hair.

Across the fleet there are 21 sailors to initiate – while of the seven OBRs only Turn the Tide on Plastic's Sam Greenfield was safe from Neptune. Even Turn the Tide on Plastic skipper Dee Caffari had to fend off desperate claims from her teammates that, despite having five laps of the planet to her name, she hadn't been properly inducted because her previous Equator crossings had been solo.

“You're going to really struggle to say that I haven't done any proper Equator crossings,” she told her mutinous crew, laughing. “It ain't gonna happen, and any revolt will be punished 10 times worse.”

Besides crossing into the Southern Hemisphere, Caffari's team had plenty of reasons to celebrate. They pulled back a place in the rankings, overtaking Team Sun Hung Kai/Scallywag to move into sixth, and also deployed a drifter buoy that will measure salinity, dissolved CO2 and Chlorophyll-a (algae), and for the first time ever, microplastics, in the Atlantic.

Despite dropping to the back of the pack, Steve Hayles, Scallywag's navigator, said he was relishing the battle – and that he expected their position slightly more to the west to pay dividends eventually.

“As far as Turn the Tide on Plastic goes we don't in any way underestimate them at all,” he said.

“It'll be a tough challenge with them for sure. Long term I'm very happy with where we are. Of course we'd swap places with the guys in front, but I wouldn't swap with Turn the Tide.”

A traditional race mark, Fernando de Noronha, a tiny archipelago around 220 miles east of the Brazilian port of Fortaleza, was removed for the 2017-18 edition to give the fleet carte blanche to pick their own route through the vast South Atlantic. But due to the weather pattern ahead, the seven teams are pretty much headed straight for Fernando as they line up to catch the stronger breeze lying 1,000 miles down the track.