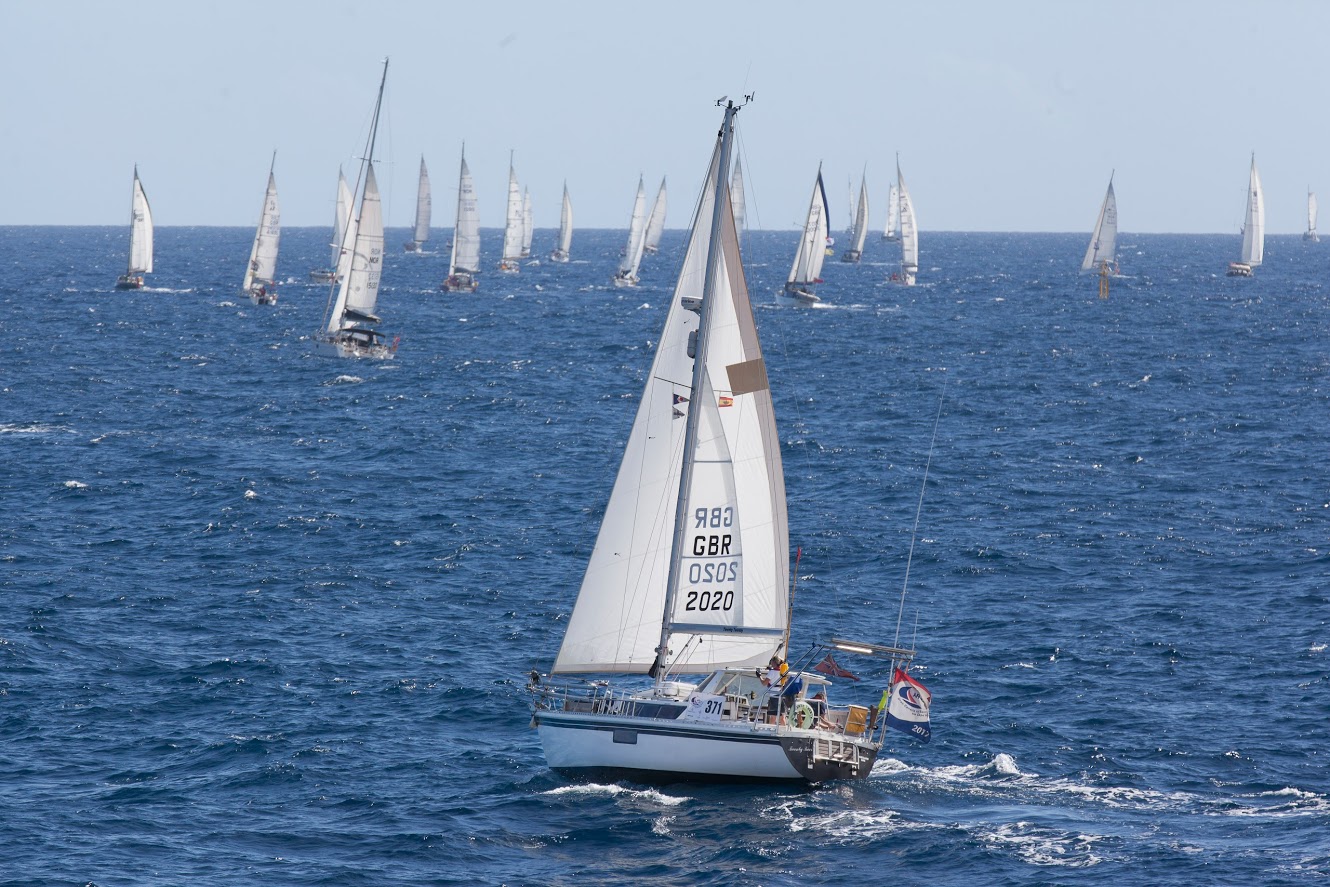 70 boats sailing off to Mindelo for the first leg of their Atlantic crossing with ARC+. WCC/Clare Pengelly.

20/11/2017
An international fleet of yachts taking part in the 32nd edition of the Atlantic Rally for Cruisers (ARC) set sail today from Las Palmas de Gran Canaria, beginning an amazing transatlantic journey to the Caribbean island of Saint Lucia. Under glorious warm sunshine, with a light breeze, a truly special atmosphere swept through the marina this morning as months of preparations became final farewells, and yachts made their final checks before departure.
Over the past two weeks, crews from 40 nations around the globe have enjoyed the pre-departure programme in Las Palmas de Gran Canaria with a series of organised seminars, safety briefings and social activities before their crossing. The crews have become an important part of the city, which was evident as the boats left the docks accompanied by a salsa band and calls of support from staff at businesses around the marina, and hundreds of well-wishers lined the seafront to wave off the boats on their Atlantic adventure. The Tourist Board of Gran Canaria, the Port Authority of Las Palmas, the city government of Las Palmas, and Rolnautic chandlery have been wonderful hosts to ARC participants for the past two weeks and it is their continued support that makes the atmosphere in the lead up to start day so spectacular.
It is a particularly diverse fleet this year with boats from 30ft to 95ft setting off on the same transatlantic course, including 156 monohulls, 28 catamarans and 2 trimarans. The sailors themselves are just as varied, aged from 3 years old to over 80. For some, today's start was a new experience, but there are also plenty of familiar faces who have sailed with the rally during its 32 year history. Many participants are now coming full circle, following in their parents, or grandparents footsteps by sailing in the ARC with their own families, and in some cases on board the same boats. With 20 children leaving Las Palmas today on the ARC,  the tradition looks set to continue for future generations too!
While the ARC is a cruising rally, there is a start and finish line, and the boats are split into divisions according to size, type and competition. The first start today was for the Multihull Division, led over the line by American flagged Lagoon 42-4 Libélula, followed by Seawind 1160 X86 and the fleet's largest trimaran, Rapido, living up to her name coming over the line third before storming off down the Gran Canarian coast.
Following on, 27 boats in the ARC Racing Division were equally eager to stretch their sea legs and sail out into the Atlantic. Experience paid off for the top three boats to cross the line, with returning Austrian training boat Godspeed leading the way. Regular ARC Skipper and Class winner Ross Applebey brought through Scarlet Island Girl hot on her heels swiftly followed by Valerio Bardi's Swan 46 Mk II Milanto.
Arguably the biggest spectacle of day for the hundreds of well-wishers watching from the shore was at 13:00 as the Cruising Division assembled for their start. It was quite a sight to see them spread along the line with a few flying bright asymmetrics in the light breeze. Representing the truly international diversity of the rally, first boats to cross the line was Norwegian Arcona 400 Tiffin, Swedish Najad 460 Ellen and British Grand Soleil 56 Mad Monkey.
A ridge of high pressure currently over the Canary Islands has been providing lovely sunny days in Las Palmas, and delivered light 8-12 knots (force 3 to 4) ENE winds for the start. It's set to increase as boats sail away from Gran Canaria, before easing on Monday morning. It will be a comfortable introduction to life at sea with winds for the first couple of days of the ARC expected to stay light – good for fishing and sunbathing – however a low pressure mid Atlantic will eventually affect weather for the crossing, leaving skippers to consider their route options carefully. The more direct west-northwest route is expected to be faster and will be favoured by the many of the Racing Division as they look for stronger wind on the top of the low pressure system. A southerly route towards the Cape Verde Islands will have less wind and waves providing slower but more comfortable conditions for the first few days at sea.
Of the 186 boats sailing on the ARC direct route, 4 are still in Las Palmas with technical problems delaying their departure. All are hopeful that these can be swiftly resolved and they will be able to depart Las Palmas de Gran Canaria as soon as possible.
All ARC boats are fitted with YB Tracking satellite trackers, allowing family, friends and fans to follow the fleet from the comfort of home online at https://worldcruising.com/arc/eventfleetviewer.aspx or via the YB Races app.
The majority of boats will take 18-21 days to make the 2700 nautical mile Atlantic crossing, arriving in Rodney Bay Marina, Saint Lucia. Whatever time they make landfall, every boat will be met at the dock by Saint Lucia Tourist Authority and World Cruising Club staff bearing rum punch to welcome them ashore. There is a full schedule of events in Rodney Bay for all ARC crews and their friends and families, culminating in the ARC Prizegiving on 16 December.

Today's departure of the ARC fleet sailing directly to Saint Lucia today means a combined total of 254 yachts are sailing the Atlantic under the ARC banner in 2017.  68 boats in the ARC+ fleet departed Mindelo, Cape Verde for the second leg of their crossing last Wednesday and have been making steady progress.