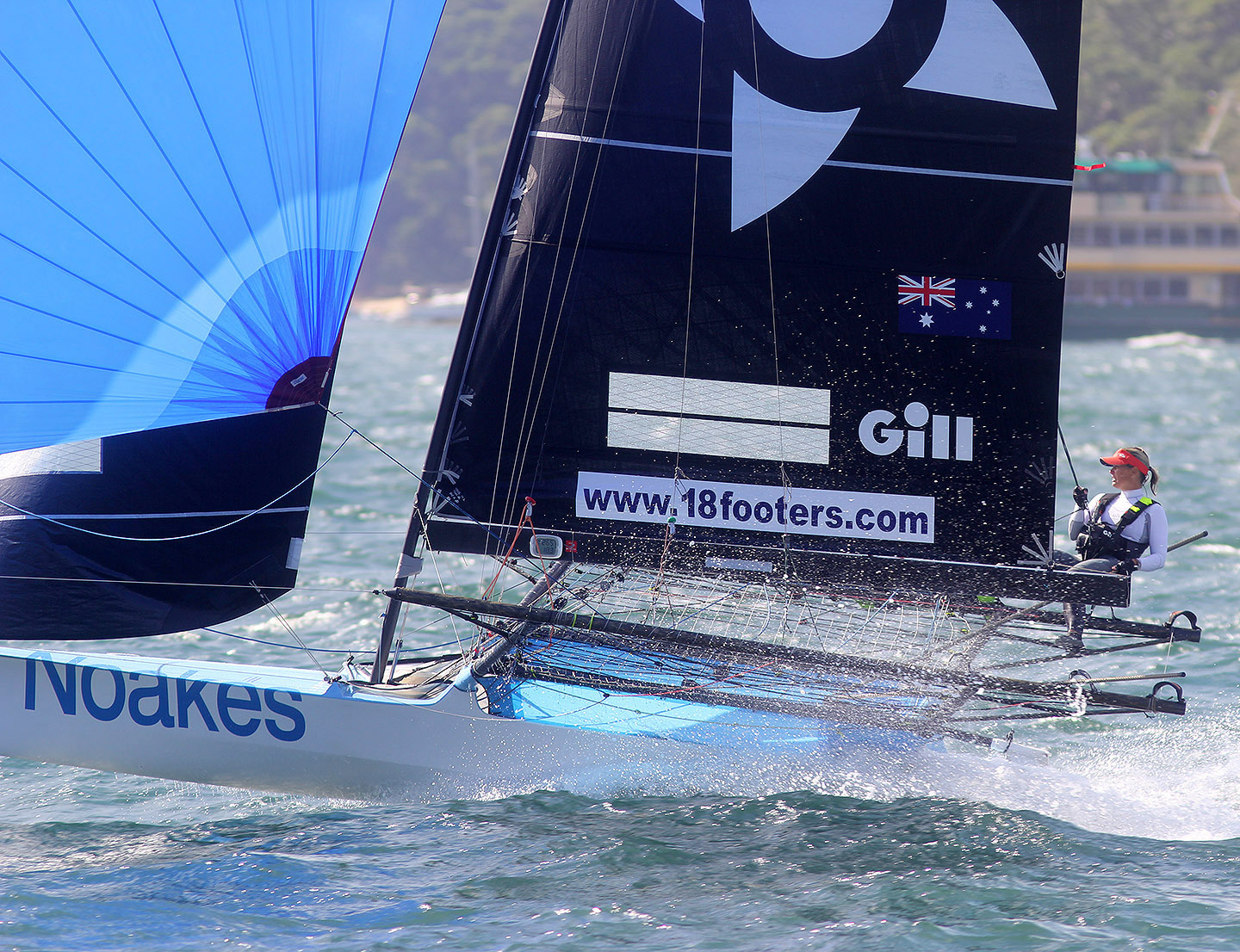 I talked to 18ft skiff skipper Yvette Heritage and 16ft skiff skipper Tilly Lang who, in line with one of this year’s themes, have been #breakingthebias in skiff sailing.

On a Sunday 18ft skiff race day on Sydney Harbour, it is not unusual to see 20-plus 18s on the start line.

Amidst this cohort of professional sailors and 18ft skiff champions is Yvette Heritage, aboard Noakes Blue with Tom Clout and James Turner.

Heritage, the only female on the start line for the 2021/22 season, is making a name for herself on the local sailing scene.

Heritage caught the 18ft skiff bug when one afternoon five years ago in 2017 she was invited to step off the spectator ferry and have a go sailing veteran John ‘Woody’ Winning’s skiff ‘Yandoo’ following an 18 race. She wanted to see if she had the ability to move from the 16ft skiffs to the 18s.

It must have felt more than very good. Heritage has gone on to achieve some personal goals since that day. She and a crew aboard ILVE competed in the European Championship in Lake Garda, Italy in 2019, and achieved results in the top five and six in JJ Giltinan World Championship races aboard Quality Marine Clothing and then Noakes Blue. Her latest challenge is the 2022 JJ Giltinan Championship on Sydney Harbour.

Heritage, a principal geotechnical engineer for a small consultancy, has sailed since childhood. She progressed through Sabots to MG14s, Flying 11s and 16ft skiffs.

After sailing 16s for a few years, she swapped a wetsuit for overalls and joined the offshore sailing scene, going on to compete in four Sydney Hobart Yacht Races.

“Then I got a bit bored of that and wanted to get back into skiffs,” Heritage said. “I had some male friends from 16s who were sailing in the 18s and I thought – I could probably do that.”

The 18ft skiff has three sailors on board and and is considered the fastest non-foiling monohull skiff around. It has undergone major structural developments since the first 18s were sailed on Sydney Harbour in 1892.

After Heritage’s experience that afternoon on Yandoo, she found out that the 18 Footers League, in Double Bay, had a skiff available for racing. She jumped at the opportunity.

Four years later, with a new boat and different crew, Heritage is driven by the constant challenge that the 18ft skiff provides.

“I’m still learning loads, how we work as a team because it’s much more important in the 18s – all the teamwork. And you’re also sailing around very skilled people, so you’re always learning from that respect,” Heritage said.

Heritage said she had to curb a tendency to giggle when the skiff teetered on the edge of careening out of control.

“I remember one race, seeing the winds coming down at 30-plus knots (and giggling) and my sheethand was like ‘It’s not funny’,” she said. “But that’s the giggle I give where it just gets out of control and you’re launching out of the water.”

Other opportunities outside of the 18s have also presented themselves to Heritage. In early 2020, Sean Langman of Noakes Group, Noakes Blue’s sponsor, offered her the position of navigator aboard the Reichel Pugh 69 Naval Group for the 156 nautical mile Adelaide to Port Lincoln Race.

This was Heritage’s first time as navigator on a yacht longer than 60ft. This experience led to the same role aboard the Reichel Pugh Maxi 72 URM for the 2021 Sydney Hobart Yacht Race. Unfortunately, the crew only made it to Kiama due to mainsail damage.

Heritage admits that while it can sometimes be challenging as a female 18ft skiff sailor, it is possible to be a strong competitor.

“Strength and weight are key factors, but it’s not to say females can’t sail 18s. [On Noakes Blue we have] always sailed fairly light. I don’t see it as a huge hindrance, but it impacts a little bit when the wind gets up, it gets a little bit harder to bear away. But it’s nothing that skills can’t override. You just need a couple of big blokes on the front to help,” she said and laughed.

Heritage has a personal trainer who guides her through strength workouts during the week and the offseason. And if the wind is on the upper spectrum of the small rig, the crew put a reef in the mainsail to make manoeuvres, like bearing away, easier.

Heritage said the Club had committed to a growth plan to attract more sailors to the class, especially youth and female sailors. Over the past year, a group of youth sailors participated in the 18 Footers League Academy, a program where experienced sailors mentor new 18ft sailors, for a smoother transition in to the class.

There have been female sailors who have competed in the 18s over the years, including renowned Australian offshore sailor Adrienne Cahalan OAM and the all-female skiff team of Alexandra South, Saskia Tidey and Lizzi Rountree.

However, the high-speed skiff requires a lot of skill and practice for it to be sailed effectively.

“When you’re short on crew, the last thing you want is someone who has never sailed an 18 before because they are different and each person’s role on the boat is really important. If you have someone who jumps on the boat who isn’t familiar with the 18s then things can go wrong fairly early.”

The best way to become an 18ft skiff sailor, according to Heritage, is to get a team together to show the Club you’re interested and ready to go.

“Show you’re keen, show you have crew, so when they get to a new season and have spare boats you’re in the mix,” Heritage said.

Heritage praised the 18ft skiff community. The boat park is a welcoming place, with 63 crew rigging up in one area, always happy to answer questions and lend a hand.

“I don’t feel any different being female, except the boats are a bit heavier,” Heritage said.

Tilly Lang got into the 16ft skiff class following a discussion, fuelled by espresso martinis, with her now sheethand, Andrew Stephenson.

Almost five years on, with Lang as skipper and Andrew and his sister Jess as crew aboard the 16ft skiff Edenda, the Drummoyne Sailing Club (DSC) team are still together and loving every minute.

The 16ft skiff is a three-person skiff, with two of the three on the trapeze harness.

The DSC sailors raced against each other in the Cherub class (a 12ft skiff with two crew, one on the trapeze harness) before combining forces in the 16.

“We picked up the 16 and sailed it like a Cherub for a few years, which didn’t work out in our favour. We sort of worked out what to do and we’ve gone from there,” Lang said.

Lang said that the 16ft skiffs is “a fun fleet and such a fun boat to sail” while noting the professionalism of her peers.

“I can’t think of another fleet that you can race against Olympians and professionals in such high numbers and high calibre sailors.”

Lang, who works in the health sector at a hospital in north-west Sydney, sails one of five 16s at DSC. As a DSC Committee member and Chairperson of the Club’s 16ft skiff class, Lang has played a key role in the expansion of the fleet since she started sailing 16s in 2017.

“At Drummoyne we had a unique opportunity — there wasn’t a huge fleet of skiffs at the Club when we picked it up. A whole bunch of us moved to the 16s at the same time so we were kind of battling together. There was no pressure because none of us knew what we were doing. It wasn’t like we were coming into a fleet of 15 established boats,” Lang said.

Lang has gone on to compete at state and national levels, and couldn’t be prouder of the crew’s achievements.

“Something I’m pretty proud of is how far we’ve come. Now I am so comfortable on a skiff and it’s pretty cool to see how quickly you can pick it up,” Lang said.

Prior to 16s, Lang sailed Cherubs for many years, a class which has a 50:50 female to male representation at regattas, sometimes tipping over to a higher ratio of females to males.

“A lot of people in skiffs know there’s been a shift that you don’t see men and women on the water — you just see sailors, which the Cherub class has nailed.

“The first 16 skiff regatta we went to, 50 per cent of the population at that regatta was on my boat. It’s pretty wild, but it’s definitely getting better.

“I think the skiffs are starting to feel the same [as Cherubs]. There’s a massive talent pool of [female] sailors that previously might not have felt welcome to come a sail a skiff and I think it is shifting away from that,” Lang said.

Lang is in the unique situation where there there are two females and a male on Edenda, but she’s never given it much thought.

“I think it all comes down to boat handling. Jess is an absolute gun, there is nothing on that boat a guy could do that she isn’t doing. She will drop a spinnaker faster than anyone I’ve ever seen. She will hold on to that thing until her arms fall off. I just know that we can handle it because we have and we will. We’ll just get it done I guess, you’re there to get it done,” Lang said.

Lang is the Secretary of the Australian Skiff Sailing Association (ASSA). She believes the 16 class is on the right track, but some skiff classes still have room for improvement when it comes to gender equality.

“Until a fleet starts asking those questions [about why there are noticeably more male sailors], it’s sort of hard to infiltrate,” Lang said.

The 16 class has a great expression of interest form for sailors looking to join the class – men and women.

“There are heaps of people willing to take you out and give you a go,” Lang said. “If you’re keen enough to go there’s no set skill that makes a good sailor. I think it’s all time on water and learning as you go – like a baptism of fire!”

Meanwhile, Lang is looking forward to continuing kicking goals in the 16 class, on and off the water.