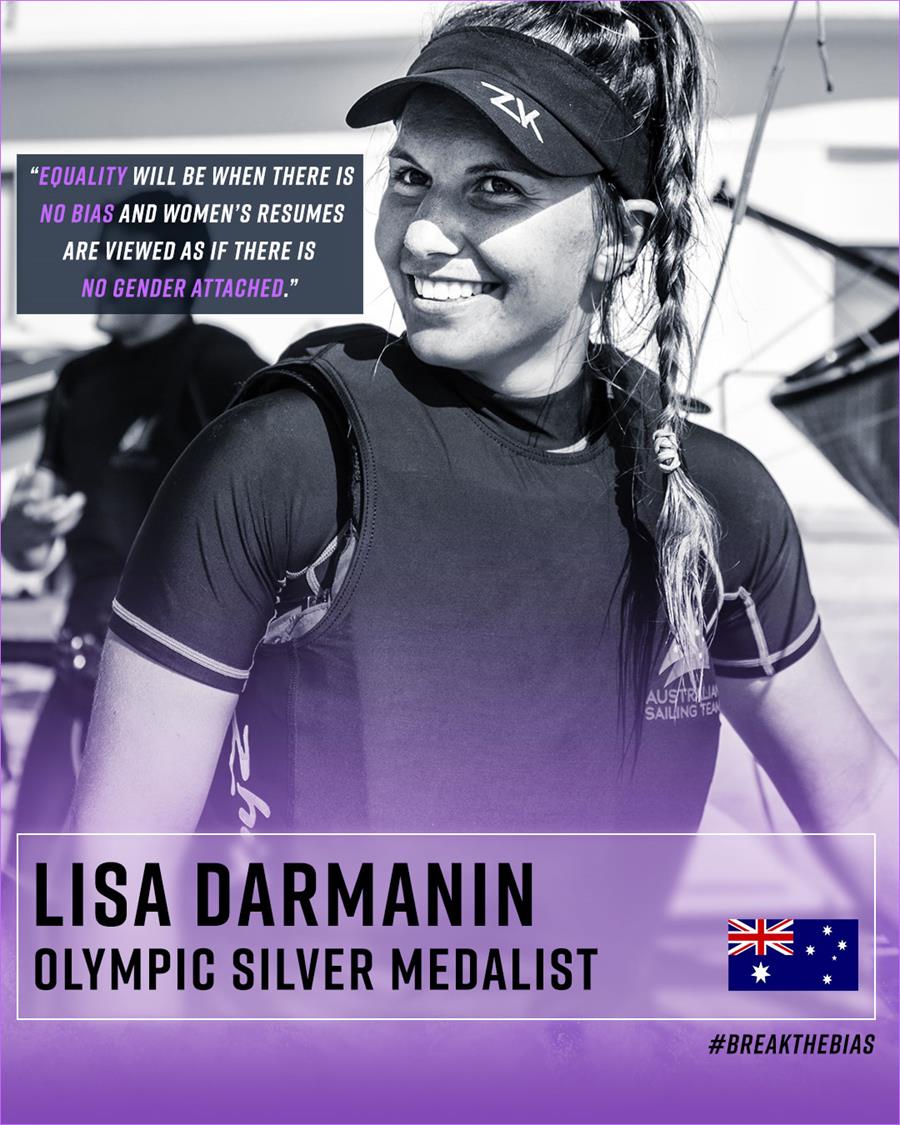 We caught up with Dee Caffari MBE – first woman to sail solo and nonstop around the world, Lisa Darmanin – Olympic Silver medallist and Olivia Piana – multiple world champion. We explored the importance of International Women’s Day, their experiences with gender inequality throughout their lives and how they are striving to #BreakTheBias.

This year’s International Women’s Day theme is Break the bias. Whether deliberate or unconscious, bias makes it difficult for women to move ahead. Knowing that bias exists isn’t enough, action is needed to level the playing field.

Why is International Women’s Day important to you?

Dee Caffari – This day is about all of us standing united to support, empower and celebrate women. It is a day to focus the conversation on making a difference to break down barriers and break the bias for a more diverse and inclusive world. I have worked hard in a very male dominated environment and I am grateful for the support of my peers but I believe I have a responsibility to help make the future of our sport more diverse and inclusive for women in the future.

Lisa Darmanin – International Women’s Day is important to me because it is a day in which we can have open discussions about where we are in the progress of gender equality. Although many of us live everyday striving for equality it’s a great opportunity to reflect what has been achieved and what are some key areas that need to be addressed. It’s important to me to celebrate the little wins and celebrate the success of women and this day is a great day to do this.

Olivia Piana – International Women’s Day is a day to remember that women deserve the same opportunities as men. We are humans with the same rights. For some people (men and women) putting down women and reducing them to countless biases is something normal. But it is not normal, this day is important to change the habits and to progress communities that are lagging behind.

How have you experienced and overcomes bias in your everyday and professional life?

Dee Caffari – There has been a stigma attached to offshore female sailors. The questions asked are not the same for both genders. Mums are asked about leaving children behind, the dads are not asked the same question. The expectation is for the experienced leaders to be men and an assumption that you are less able if you are a female leader. I have been lucky to sail in both mixed and all female teams and have never felt a barrier to what can be accomplished. After all we are sailors managing the forces of nature. The same waves and wind no matter what gender you are. Ability, attitude and aspiration defines success more than gender.

Lisa Darmanin – Sailing has come a long way in gender bias yet we are still a long way to achieving equality. I find that often females are not considered in the talent pool when teams are making decisions about who to select in the professional realm. There are so many skilled female sailors out there and without someone opening the door they can’t get experience and without experience you cannot progress. This starts from a youth level and I’ve seen this with the mixed classes how the male sailors are given opportunities that the females are not or how the men are having to jump through less hoops than the women.  It’s great to see so many initiatives to get females on the professional sailing circuits but we are just trying to catch up on decades of lost time.

Olivia Piana – When I started competing in windsurfing, discriminating against women was something normal. I didn’t even realize it. Sometimes I wasn’t even called to the podium at all when I had won and award. It was when I started competing in Stand Up Paddleboarding (SUP) that I saw that there was a big problem in windsurfing. For some reason a “real sport” physical and tough like SUP, recognizes women better than a ‘fun sport’ like windsurfing. Since 2015 and competing in SUP I am now treated equally to men. I have won the same prize money in the events and I even signed the same contract as the top male rider with my Californian board’s sponsor, Rogue. That was amazing! It gave me the opportunity to improve my skills, to train more and to make my passion my full time job. It is very important to support organizations that represent the new human values of our society. There is no future for those who live in the past.

What does equality and having an unbiased environment mean to you?

Dee Caffari – We still want the best person chosen for the job, but we want the opportunity to be equal for everyone to apply and be considered. We are after parity, rather than equality. Women do not want to meet a quota or make up the numbers, we want to be represented because we are good enough to be there. We want to break down the boys club mentality and open people up to the idea that gender does not define ability.

Lisa Darmanin – Equality will be when there is no conscious or unconscious bias and women’s resumes are viewed as if there is no gender attached. Women will need to go through the same process as men to get on teams and be given a fair go to showcase their skills and abilities. Men take chances on other male sailors and give them an opportunity to prove themselves but they don’t take chances on women in the fear they might fail.

Olivia Piana – Living in an equality and unbiased environment means to give the same opportunities to anyone. It’s to believe in the power of people, regardless of gender or the origins. Everyone should be recognized for what they do and who they really are, rather than how they look. In terms of gender inequality, first of all it’s to BELIEVE in the strength of women. We create what we think : if you think women are strong, they are strong, if you think women are weak, they are weak. We must change the way we look at women and believe in their potential as much as in anyone else.

What motivates you to strive for equality?

Lisa Darmanin – The enormous amount of female talent and skill that is out there and overlooked is what makes me strive for equality.  We have so much to offer and I want to see women succeed in every sport and industry.

Olivia Piana – My motivation is for the future generations, for today’s kids can live in a healthy environment. No one wins by trying to dominate anyone, by disrespecting and belittling others. In SUP I have had role models : Annabel Anderson and Candice Appleby that have seriously shown us the way. I know how strong women can be to fight for their rights and can have an impact on the future of a sport.

How do you think we can achieve an unbiased future?

Dee Caffari – We have to address a culture change to really have an effect and that takes time. It happens slowly and we have to get buy in from key players who are well known role models to lead by example. In sailing this is starting to happen. But it is a little like the risk of greenwashing, the communication needs to be authentic. The behaviour behind the action has to be believed. We need male champions to support this move and be happy to speak up about it and show us their belief in it by their actions.

People do not like change. But one thing we can all be sure of is change. So don’t be afraid, help facilitate change and lead by example. It takes time but every small step is a move forward in the right direction. Support, Empower and Celebrate success.

Lisa Darmanin – In sailing, the decision makers need to have a look at how they are making decisions. They need to be educated on unconscious bias and look at the way they view a female vs male resume, and how they form their teams both on and off the water. Women at this point in time need a leg up to be fast tracked with skills because we are catching up from the years of inequality and lack of opportunity to develop, so we need initiatives to upskill and opportunities to accelerate learning.

To #BreakTheBias we need to be looking at our everyday, we need to identify and recognise the bias, both males and females and we then need to take action. As women we can champion our cause, be a good learner, challenge situations and back our talents. Men can be open to conversations, acknowledge the imbalance, help upskill the women and give them a chance just as they would to their male counterparts.

Olivia Piana – Sport is an excellent school of life and a way to give visibility to the human values of our society. The media are very important. It is very important to give equal opportunities on sports events, in terms of rewards and especially in terms of media. We must learn to show the strength and talent of women through sports (and other means). Women should be free to dedicate themselves to work and passions. One suggestion would be that men can take more responsibility at home and in the family. Concrete example: take care of the baby while mom rides the Moth, Wingfoil, Surf Foil, SUP…

Beyond the media and the recognition of women in sport, sport is an amazing way to have fun, to relieve stress, to go beyond your limits, to accomplish great things and to gain self-confidence. Sport makes you the best version of yourself.