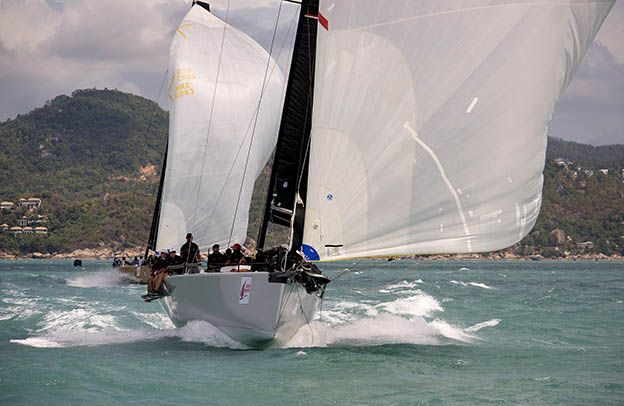 More than 500 sailors are expected at Samui Regatta 2017. Photo by Joyce Ravara.

SAMUI, Thailand – Samui is set to turn on the style as more than 500 sailors head to the Thai tropical island for some fun in the sun at the 16th Samui Regatta, held 20 – 27 May, 2017. Based at Centara Grand Beach Resort Samui on Chaweng Beach and with support from the Tourism Authority of Thailand, the festival of sail attracts participants from more than 20 countries and has put Samui Island on the map as a world-class sports destination.

Now in its 16th year, the regatta maintains is prime position as the final event in the season-long AsianYachting Grand Prix championship and the best sailors from Hong Kong, Singapore and around Asia, as well as from as far afield as Australia and Europe, come together for five days of competitive sailing in the warm waters of the Gulf of Thailand.

“Samui Island is known for its excellent sailing and onshore hospitality. Centara Grand Beach Resort Samui is the perfect host for the regatta, providing an unmatched venue for post-race celebrations and the ever-popular final night Gala Dinner, while on-the-water sailors will be in for some very competitive sailing,” commented Simon James, Race Director.

Frank Pong and his multinational crew on the 76-foot Jelik are up against a trio of TP52s in IRC 0 including defending champion THA 72 (ex Provezza), skippered by Kevin Whitcraft, Team Hollywood (AUS), skippered by Ray Roberts, and Freefire (HKG), skippered by Sam Chan. Taking on the bigger boats is 2011 winner Marcel Liedts, who will be racing his Ker 46 Zannekin (HKG) at the regatta for the first time.

In the fast forties division, IRC 1, the Ker 43 Black Baza (HKG) are looking to place well in an attempt to protect their AsianYachting Grand Prix lead and defend their 2015/16 title, though they're up against some formidable competition in the likes of the Sydney GTS 43 EFG Mandrake (HKG), who will be competing at their 16th Samui Regatta this year, the Club Swan 42 Loco (USA), Farr 40 Ramrod (AUS), Sydney 40 Emagine (AUS), Beneteau First 44.7 Fujin (AUS), and an all-Chinese entry on the Beneteau First 40.7 Ocean Night (CHN).

“Not only do we have some top boats and skippers entering again this year, the crew lists are littered with names with CVs including America's Cup, Volvo Ocean Race, World Match Racing Tour and more,” added James.

The regatta kicks off with youth sailing on the opening weekend (20th and 21st) followed by the opening party at Zico's Brazilian Grill & Bar. Five days of racing are scheduled for the keelboats and multihulls with daily prize-givings on the beach and a Reserve Day on Thursday 25th. The regatta wraps up on Saturday 27th with a lavish Gala Dinner presented by Centara Grand Beach Resort Samui.

The 16th Samui Regatta will take place 20th to 27th May, 2017 headquartered at Centara Grand Beach Resort Samui, and is organised by Regattas Asia in conjunction with the Samui Yacht Club Regatta, under the auspices of the Yacht Racing Association of Thailand, the Municipal of Koh Samui and the Sports Authority of Thailand.