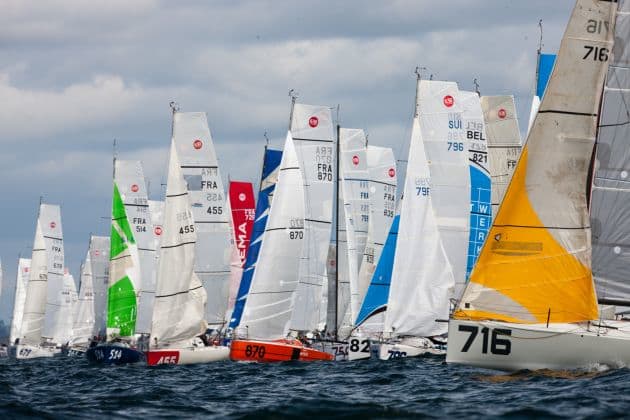 Every edition of the Mini Transat confirms that it remains, by far, the most international of single-handed races. For the fortieth anniversary of the Mini Transat, there are no fewer than fourteen nationalities set to be represented at the start. In total, thirty racers from overseas will be competing, which equates to a little over a third of the overall line-up.

Is it down to its profoundly accessible character or the lingering legacy of its British descent? The fact remains that the Mini Transat, far from being a French preserve, has always attracted overseas applicants, far beyond the usual frontiers of solo offshore racing.

Must it be repeated that from the second edition, it was a sailor from the US, Norton Smith, who dominated proceedings? Since the first edition of the Mini Transat, 13 overseas sailors have secured a podium finish. Our minds naturally turn to the Swiss sailors Laurent Bourgnon (2nd in 1987), Yvan Bourgnon (winner in 1995) and Bernard Stamm (3rd in 1995). We must add to this list the Polish sailor Kazimir Jaworski, 2nd in 1977 for the first edition of the race and New Zealander Chris Sayer, 3rd in 1999, aboard a prototype built in his native country.

Certain overseas sailors have gone on to become stars of offshore racing, such as Britons Ellen MacArthur and Sam Davies. In Spain too, the Mini Transat has served as a springboard for sailors of the calibre of Alex Pella, winner of the Route du Rhum 2014 in Class40 as well as Anna Corbella, who is returning to the 2017 edition after completing two editions of the Barcelona World Race. In fact, the vitality of the Mini Class in southern Europe is evidenced by the fact that Italy and Spain make up the largest contingents of overseas sailors.

A scent of adventure that permeates the world

It really is one of the special features of the Mini Transat that it calls to sailors from right around the globe. All the way from the Antipodes, New Zealand and Australian sailors have come to do battle. Similarly, several Japanese and Chinese skippers have started out in the Mini, before returning to their home countries to spread the word about the wonders of the race. On the other side of the pond, the arrival destination is inevitably involved in the race too. In this way, for several editions now, we have seen entries from the West Indies. This year, Guadeloupe will be represented once again by Keni Piperol, at the helm of a prototype that was sailed by Italian sailor Michele Zambelli in 2015. Clearly, the Mini knows no bounds.

The nationalities taking the start on October 1, 2017