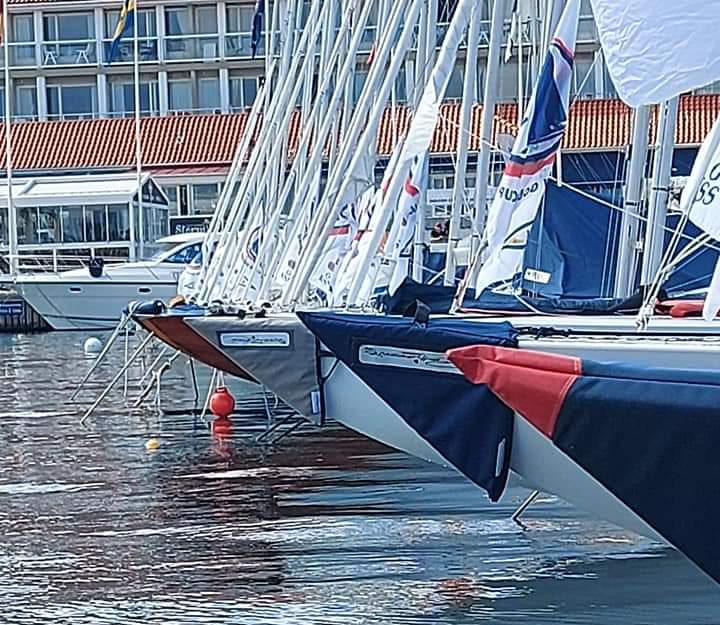 Racing was abandoned on day two of the Dragon Gold Cup due to a lack of wind.

For the second day running the wind gods refused to shine on the International Dragon Gold Cup 21 by Yanmar in Marstrand; on the opening day they provided far too much wind and today they refused to send any wind at all.

The plan for day two had been to run two back-to-back races, but it soon became clear this was not going to be possible and the Race Committee, led by PRO Mattias Dahlstrom, announced an initial three hour postponement with the fleet held ashore.

The committee boats headed out to the race area to keep an eye on conditions and as they day wore on the rain dried up and the sun came out, raising everyone’s hopes, but the wind simply would not appear.

The morning coffees segued into lunch and then afternoon siesta time, before finally at 15:30 the Race Committee made the inevitable decision to abandon racing for the day. Luckily the abandonment message was quickly followed by a second message inviting all the competitors to an informal drinks party, and so after a tough day of waiting everyone was able to relax in the glorious sunshine and enjoy a few well deserved beers.

IDA Vice Chairman Justus Kniffka said, “Whilst the weather is frustrating, the sailors fully support the Race Committee’s decisions. The event is exceptionally well organised and the host clubs are doing a wonderful job of making everyone feel welcome and keeping us well informed, which is all we can ask in such difficult circumstances.

“Although sad not to race, the extra time ashore is never wasted and it is wonderful to be able to catch up with so many old friends and to make new ones too. We have already waited an extra year to be able to race this Gold Cup, so we can take a couple more days in our stride!”

The teams have travelled to Marstrand from as far afield as Japan and Australia, but one crew’s journey to the regatta was considerably more challenging that most. When young Danish Dragon sailor Frederik Berg and his crew heard that the Gold Cup was coming to Marstrand they knew they had to take part. They had a boat, DEN323 Camilla, they had sails loaned to them by their club, they had enthusiasm, skill and commitment, but they had one stumbling block.

They had no way of delivering the boat from their home base in Hellerup, Denmark to Marstrand, as they don’t own a suitable tow vehicle and hiring a truck or paying a delivery driver would have been prohibitive.But competing in the Gold Cup was their priority and so they thought back to the Dragon sailors of the past, who often sailed their boats long distances across open water to attend regattas.

If those sailors could do it back in the 1930s, before the boats had any built in buoyancy and when state-of-the-art sailing clothing comprised a woolly jumper, a yellow oilskin and a sou’wester, surely they could do the same now with access to twenty first century gear and technology.

By sea Hellerup is approx 170 miles from Marstrand and the route takes you through the narrow Oresund Channel between Denmark and Sweden and across the notorious Kattegat Sea. They had access to a 27′ sailing yacht to use as their mothership, experience in delivering other boats and it was high summer so the trip would be a fun adventure, or so they thought.

Frederik takes up the story. “We left Friday morning from Hellerup and sailed through the day, but had to stop in the evening because too much wind came, we had 40 metres per second [over 70 knots] coming out of nowhere. We were towing the Dragon with the yacht under motor much of the time, but we also sailed both boats some of the time.

Fortunately the conditions abated sufficiently for them to complete their journey and they arrived safely in Marstrand a day late, but to a very warm welcome and the good news that they have not missed any of the races! The other sailors have been so impressed by this young team that they have been offering them help and support, including a “new” spinnaker which has been donated to them by reigning Dragon World Champion Andy Beadsworth and his Provezza Dragon Team.

The weather forecast for day three looks more promising with a northerly breeze in the upper teens to low twenties, so all fingers are crossed that racing can finally get underway.

Championship racing will continue until Friday 20 August with a total of six races scheduled.