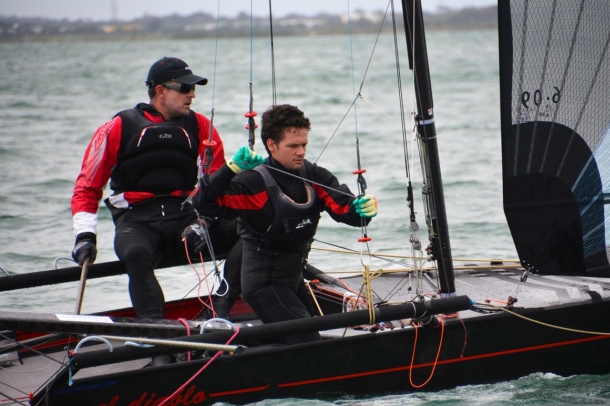 The traditional International 14 Teams Racing World Championship, has acted as a warm-up event, that saw 24 of the 67 teams entered in the Fleet Racing Worlds, out on Corio Bay over the last two days. It gave these competitors a chance to test their equipment and familiarising themselves with several of their competitors.

The friendly showdown was held by host club, Royal Geelong Yacht Club, close to the shoreline where waterfront visitors and office workers were able to enjoy the spectacle of the fast-paced racing.

The Team Racing trophy was taken out by Australia 1 – Brad Devine, Lindsay Irwin, David Heyter and Stuart Sloss –  but not before several dramas almost derailed the campaign.

A chuffed team captain, Del Boca Vista’s Brad Devine, said Australia I went into the final confidently ready and in control of the challenging teams, until just before the start of the first race. “The first drama was that David Heyter broke a side-stay adjuster which meant his mast was, basically, going to fall down. He got towed back to the beach, rectified that and then proceeded to come back out and have a second go.

“The second drama was with Lindsay Irwin. His main sheet system broke inside the boom in the first race. So the first race we got absolutely walloped by the North American team as we only had two boats finish. Then the two boats made it back out for the next two races and we knocked off the North Americans in the last two races which meant we went through to the next round.

“We had a very close race in the first heat with the Australia 2 team, but then won the next two comfortably,” Devine said.

“It was nice to be out there and starting to compete, especially for us as we haven’t sailed for 12 months. We got to do some starts and finishes and some tactics upwind. We needed to do that,” Devine added.

The Teams Racing course was set up close to shore in a different area to what will be used for the World Championships fleet racing which starts on Thursday. The teams raced in anything between six through to 18 knots. It was tricky for the inexperienced with some easily capsizing.

Defending World Champion Archie Massey (GBR) had a disappointing time on the tricky course. “We ended up dead last. We had two strongest guys here on the team and two weaker guys who were on average about six or seven minutes behind the race. Andy Partington and I chose the two teams – Europe A and Europe B. We thought it was a good idea to make them as even as possible.

“Glenn (Truswell) wanted to sail with our team as we will be up against each other in the worlds,” Massey said.

“Normally the Teams Racing is very good as you get lots of racing in and get to line up with everyone.

“Today was the most valuable not racing (they got knocked out yesterday). Racing flat out is really the only time its valuable. So we spent the day doing some tuning runs with Glenn,” Massey added.

Tomorrow all teams will be required to complete the official measurement and registration process. On Wednesday Royal Geelong Yacht Club will set up a practice race for the 67 teams ahead of the official start of the World Championship racing on Thursday.