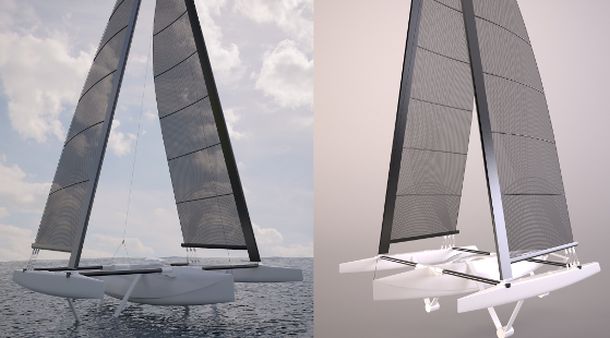 Riding on the back of the thirst to foil generated by the 34th America's Cup, a US company has come up with an innovative way to sell their new foiler – offering the first five buyers a chance to get their money back. Here's the media release, with superlatives deliberately left in:

MINNEAPOLIS – Following years of careful design and development, WindRider has begun production on the RAVE V, a revolutionary hydrofoil sailboat unlike any other foiling boat on the market today. Designed to bring the complex and exhilarating sport of sailing on hydrofoils to the average sailor, the RAVE V displays a level of stability and ease of sailing that cannot be found in other foiling boats – opening it up to a group of sailors who have never before now had the opportunity to fly on the water.  In exchange for their initial investment, WindRider is prepared to repay the first five buyers the full purchase price of their RAVE V.

“Current foiling boats are expensive, complicated, and require exceptional agility and skill.  The RAVE V is meant to be affordable, comfortable, and relatively easy to handle,” writes WindRider COO Robert Sanberg on the company’s blog.

To bring the innovative RAVE V into reality, WindRider is prepared to sweeten the deal for a small handful of buyers. The first five sailors who invest in the RAVE V before May 31, 2015 will have the unprecedented opportunity to have their investment paid back in full by receiving a share of all future RAVE V sales until their initial investment is repaid. This initial buyer investment will allow WindRider to continue with production as scheduled without the need for a bank loan, and as WindRider hopes, will create five ambassadors for the RAVE V. The offer is simple: the first five people to purchase the RAVE V for $29,500 before May 31, 2015 will earn $200 for the sixth RAVE V and every one sold thereafter until the initial investment of $29,500 is repaid. Purchasers agree to take delivery after August 2015, or as soon as production boats are available; however, buyers who are not satisfied with the boat at the time of delivery will be given a full refund from WindRider.

The current production plan, based on estimated sales, is for five boats per month – meaning these five investors stand to receive up to $1,000 per month for 30 months until the time at which their investment has been repaid in full.

The test boat, in production now, is scheduled to begin water trials in June. For updates on the RAVE V’s production or to read notes from the designers and engineers, go to the RAVE category on the WindRider blog or subscribe to the RAVE list. To inquire about being one of the first five investors, call Dean Sanberg at 952-200-8302, email dean@windrider.com, or print this pdf form to act fast.