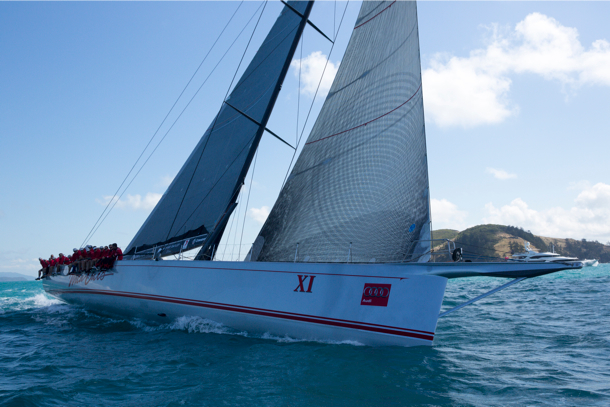 McConaghy Boats began back in 1967 when founder, John McConaghy was building high-performance dinghies. The company moved to its Mona Vale location in 1989 and continued to flourish. It was that time that Jono Morris first had involvment with the boat building company when he was working for Exile. In 2000 Jono Morris and Mark Evans took over the company and in 2006 they expanded, setting up a facility in China. McConaghy Boats has built everything from America's Cup yachts to super maxis to MC38s to Moths and even Optimists.

But now they are branching out with other projects such as a submarine for James Cameron and part of the Sydney Opera House. We spoke to Jono Morris about the company and where he sees the boat building industry going.

What have been the major changes in yacht manufacturing over time?

This company was one of the very few companies that pushed the pre-preg and nomex, the aerospace materials, and started to apply that to yacht building and that was pretty unusual especially back in 88 and prior to that. Progressively since then it’s become technology that has been more adapted across the board. To successfully execute a build in those materials, has a lot of challenges that particularly on a large scale haven’t changed basically.

One of the things that has changed progressively is the moulding techniques. Back in the earlier days it was generally pretty common to build a male plug and you would build over that then fair. Now the norm is more towards female plugs and even carbon female tooling. So we have done a lot of work on R&D of lots of little details of the construction process to minimise weight gains and the structure over time.

What prompted the move to China?

We were looking around at alternatives like going to the Central Coast or going south or quite a few options. Out of the blue an opportunity came up to partner with a company in China and we went up there to have a look and were pretty impressed by what we saw and we hadn’t intended to set up our own yard, we had intended to partner with an existing Chinese composite company.

That’s how we kicked off. We started with that guy and then a couple of years later we had built a few boats and things were working out as they normally do with Chinese partners. At that point we decided to get out of that arrangement and set up on our own because we saw the potential with what we were doing up there.

How difficult was that move and what changes were implemented to ensure quality control remained high?

It’s very difficult but I think everything you do in this industry is not easy but that certainly was a big challenge. It still is a big challenge. Ultimately what we had to do initially to maintain quality is get the right guys that we had worked with in the past to come up and help train everyone that we had. The advantage that we have got now is that that training has been ongoing now for nearly ten years. So we have got quite a lot of guys who have been there for that time frame and they have all learnt from the various people that have been on site.

What role does the Mona Vale location play?

Mona Vale I guess, when we started up China, we were still very busy down here and we have remained busy up until a few years ago when the demand really dropped for custom boats and the dollar was the real double whammy. We still had a range of projects, since we hadn’t really been too busy with yachts, like the submarine for James Cameron and we are doing other composite projects like the aerial masts for the destroyers they are building in Adelaide and we are doing a roof for the Sydney Opera House at the moment. So we have done a whole range of different challenging composite projects that actually require a lot of skill and thinking and understanding.

What are you doing with the Sydney Opera House?

You have probably seen they are doing a massive development down there and they are redoing this whole entry area. Right at the entry of where the cars come in they need a new gatehouse so it is going to be a very obvious building. The son of the original architect, who has now died, came in here to talk to us, he has basically come up with a design, it is quite a small building but it is very intricate and beautifully designed. They talked to us about making the roof. So we are making this roof that kind of looks like the hull of a yacht. It is a curved dish thing that floats above the glass. And then we are doing what they call a pod which is where all the computers and the toilet and the functional parts of this gate house go.

You are now building multihulls where do you see the future as far as sailing multis is concerned?

That is interesting. It is hard to know. It is such an area of development and if anything is changing quickly in the industry it is in the multihull segment. One of the things I thought was interesting about the latest America’s Cup development is they were saying if they go back down to the AC48 they are going to be quicker than the AC72 which is unbelievable. I don’t know. It is pretty exciting development. I guess on one hand you have got the extreme of say the Lagoons and at the other end you have the development of the speed side of things and foiling. In the multihull market there is a huge spectrum of development in different areas.

Where do you see future technological advances going?

In general I think with our industry, and it has happened very slowly over time, has always been an early adopter of new technology. People are prepared to take a certain element of risk to gain an advantage and are always developing and that’s what most of us as builders in the industry find exciting and keep us going every day.

What are the future plans for McConaghy Boats?