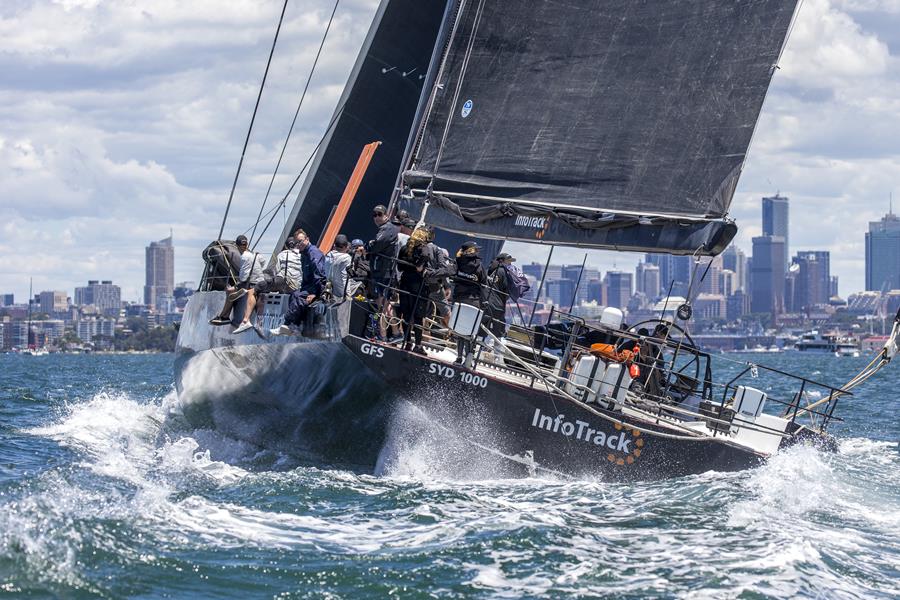 InfoTrack owner Christian Beck and his crew continue to firm as the ones to beat for line honours in this year’s Rolex Sydney Hobart Yacht Race after they produced a near-perfect performance to win the 2020 Grinders Coffee SOLAS Big Boat Challenge on Tuesday.

InfoTrack was first across the line in 52 minutes, 35 seconds. In second place was Peter Harburg’s Black Jack from Monaco in 53 minutes, 29 seconds. Third was the David Griffith-owned Whisper in 1 hour, 5 minutes, 59 seconds, while fourth was Sean Langman’s Moneypenny in 1 hour, 7 minutes, 22 seconds.

Moneypenny twice had issues with their spinnaker allowing the smaller Whisper to sail through her on the second lap of the course.

But asked if the win and their win in last weekend’s Cabbage Tree Island Race had a bearing on their Rolex Sydney Hobart odds, InfoTrack’s Mutter said: “We obviously like where we have been going so far.

“But no, the answer is no. We know that we have an incredible competitor in Peter [Harburg] and Mark [Bradford, Black Jack skipper]. We think it is going to be a real hard ask for us to beat them to Hobart. It is going to be one hell of a match race.”

Pressed on his crew’s confidence for the Rolex Sydney Hobart after the win, Mutter said: “It’s a great feeling for the team. It reinforces all the hard work that the guys have been doing. But we can’t let it go to our heads. Their team is an immaculately prepared team and we are somewhat different. We just don’t have the resources to emulate that.

“We have enough stuff to be able to compete with these guys. If we get the right conditions, we are in with a chance. We are just hoping we get at least a dead even wind speed. As you saw out there today, we had a fantastic race; and we had a fantastic race at Cabbage Tree with these guys within sight of one another which is always good. We’re looking forward to the battle.”

Asked about Mutter’s view that Black Jack is better resourced, Bradford replied: “What both boats are running off the back of is, last year was a really, really competitive Hobart. I think both boats were prepared to a reasonably high level last year, and with this COVID thing, it was [about] digging back into the boat and getting out of the mothballs.

“The timing of that probably shows up in the appearance of it,” he continued. “They have a pretty well-resourced team. We have a huge amount of respect for them. So, I would say no … I don’t agree with that.”

While Tuesday’s Sydney Harbour race only had four entries, what it lacked in numbers it made up in excitement. InfoTrack and Black Jack were the only super maxis in the race to line up against two smaller boats, the JV62 Whisper and the Reichel/Pugh 69 Moneypenny.

The race started at 12.30pm in sunny conditions in a 12-15 knot southerly wind that increased to 15-20 knots. Black Jack jumped to an early lead over InfoTrack, the two super maxis quickly distancing the two smaller boats of which Moneypenny was the quicker of the two.

Black Jack held the lead racing downwind in a brilliant display of champagne sailing to the first mark at Manly. However, InfoTrack remained doggedly in touch and soon after the mark moved into first place. Heading upwind towards the city skyline, InfoTrack consolidated her lead, then extended it turning the second mark at Shark Island and over a second lap to the Manly mark and back to Shark Island and the run to the finish near the Opera House.

For the InfoTrack crew it was the ideal sign-off on preparation for the Rolex Sydney Hobart that included an impressive line honours and overall win in the Cabbage Tree Island Race last weekend.

InfoTrack, a wide berthed 100-footer suited for heavy conditions, won line, IRC and PHS honours – but in lighter winds. Beck’s super maxi’s latest victory today was equally as impressive considering the conditions should have suited the lighter and skinnier Black Jack much better than his boat.

All the InfoTrack crew needs do now is stay healthy, happy and importantly hungry to make best of the opportunity that awaits them in the 628 nautical mile Rolex Sydney Hobart starting on Boxing Day. If they don’t, they know very well that their rivals on Black Jack will be ready to pounce and win.