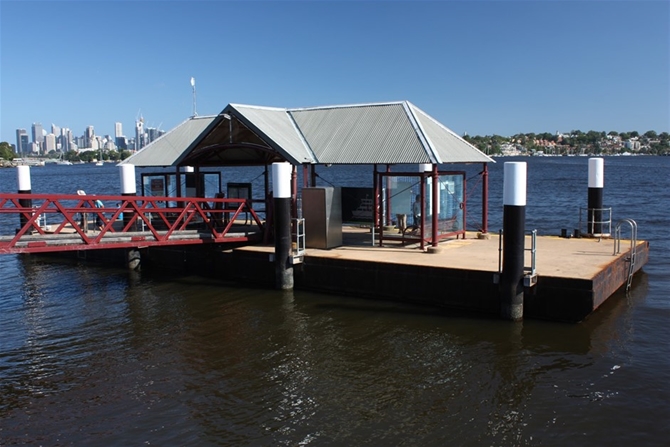 Sydney, December 2020 Does the above sound like your letter to Santa this year? Here is your unique opportunity to bring your wish to fruition.

Woolwich Ferry Wharf Pontoon, known to be located on the Lane Cove River, is being auctioned off this week with the bidding starting at only $9.

The first build on this Valentia Street site was in 1856 for a ferry service for Hunters Hill residents and has since evolved into the steel hull pontoon it is today. The sale includes the entire structure, original drawings by Sydney Ferries dated 1989, and a Statement of Heritage Impact from the NSW government.

The pontoon was operational from 1994 to 2020 and has been removed from the original property for the sale. The online auction will run December 8th from 1:00pm AEDT to December 14th, 7:00pm AEDT on Australia’s largest online commercial marketplace, Grays.

The pontoon is a comprised of a steel hull with one longitudinal and three transverse bulkheads, and a concrete deck slab. The Pontoon dimensions are approximately 24m x 8.5m x 2.2m.

Please note: The listing is for the pontoon, shelter structure and deck furniture only and does not include the piles, gangway or signage.

The first wharf on the Valentia Street site was constructed in c1856 as part of a ferry service established by Hunters Hill residents. The wharf, in part, was established to allow for the transport of carts and drays across the river to markets at regular times..

In July 1856 a meeting of the local residence agreed to the building of a road from Ryde to Onions Point which could then connect with a steamer to Sydney, as well as encouraging the development of Onions Point. By 1861 a wharf was in place at Valentia Street, at the time called the Government Road in reference to the government installed electric telegraph line that terminated at Woolwich Wharf.

A subdivision plan from c1925 for the Monte Cristo estate at Onions Point shows the extended wharf with a waiting room on the eastern side and a rubble wall fronted reclaimed area and wharf extension. During the 1950s a bus turning circle was created at the wharf. The old wharf was demolished in 1993 and replaced by the current structure, being a floating ferry wharf with waiting room, accessed from the shore via a suspended walkway. The stone steps and sea wall from the earlier wharf remain on the site.

Polaris Marine Constructions is a marine contractor with in-house towage and marine construction capabilities. We are happy to offer competitive rates for transport, and/or installation of piles, mooring blocks, gangway’s etc as required for establishment at the new location.

Disclaimer: Item being sold on an `As is Where is` basis.

The seller, Polaris Marine Constructions, is offering competitive rates for the transportation, relocation, and installation of the wharf.

For more photos and information or to bid, visit Grays.