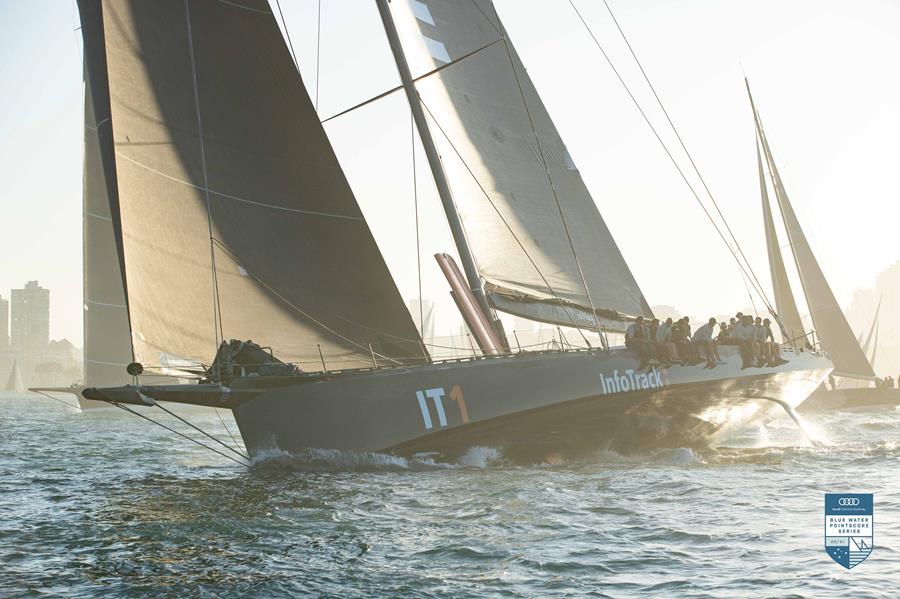 Even more impressive though, the team was able to score the treble in light conditions which are widely considered to favour their super maxi rival, Peter Harburg’s Black Jack.

“While I unfortunately wasn’t on the boat for the race, it was a great opportunity for me to see how the team went without my wisdom and guidance,” joked InfoTrack owner Christian Beck. “They actually went much better!”

After a textbook start off Point Piper Friday evening, InfoTrack held off Black Jack the whole way down the Harbour before the lighter, skinnier RP100 slipped past just before Sydney Heads.

The pair were never far apart from there, Black Jack making it to the Cabbage Tree Island turning point first with InfoTrack less than one nautical mile behind. As the breeze began increasing behind them for the leg home, InfoTrack was able to reel in its rival, passing Black Jack off Lake Macquarie and holding that advantage all the way to the Rushcutters Bay finish line.

“The crew was happy to be holding on to Black Jack on Friday,” said Beck. “When the wind came in later in the race, the team had the boat ready and were going fast.”

With good breeze for the duration of their race, the super maxis posted fast times which sent them straight to the top of the leader board. The wind eased as the race continued for the smaller boats though and InfoTrack retained her place, claiming IRC and PHS Division 1 victories. Black Jack also held on to the ORCi Division 1 crown.

The race was somewhat of a David and Goliath affair – while the big end of town cleaned up in Division 1, the smallest boat in the fleet similarly wiped the floor in Division 2.

Shane Kearns’ S&S 34 White Bay 6 Azzurro is no stranger to the top of the table with two Noakes Sydney Gold Coast Yacht Race overall victories and multiple Rolex Sydney Hobart Yacht Race divisional victories to her name. This race was no exception as the team took home IRC, ORCi and PHS Division 2 wins.

With the lead-up races of the Blue Water Pointscore complete, the focus now shifts to Race 5 of the pointscore, the Rolex Sydney Hobart Yacht Race. After showing great form in varied conditions, InfoTrack will be looking to replicate this performance come Boxing Day.

“We’ve got a team who haven’t all sailed together before and we’ve got a lot more practice to do before the Rolex Sydney Hobart,” said Beck. “I predicted Black Jack to be the favourite, but when we do well in the light wind that’s very helpful. I wouldn’t have predicted us to win this race!

“The crew has done a great job, I’m very impressed with how they raced on the weekend. It was a great result for us, we’re very happy with it”