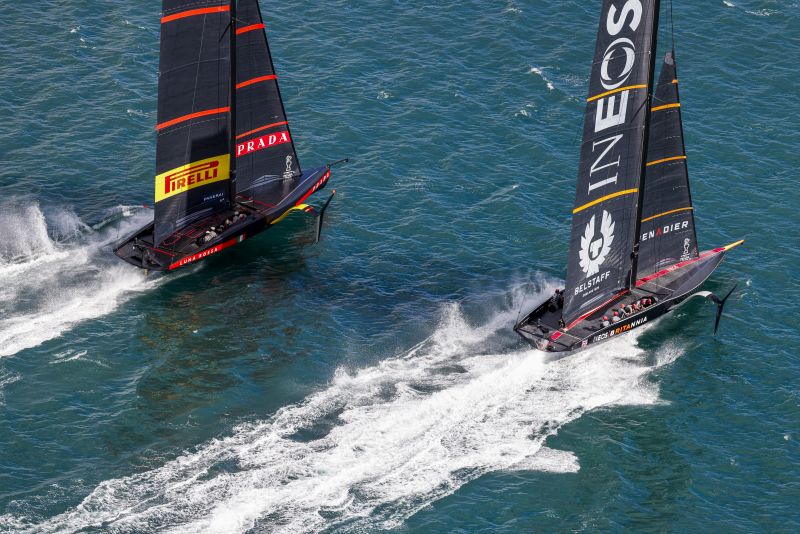 INEOS TEAM UK stays unbeaten after what was probably the closest race seen so far on the AC75s, with nine lead changes and three close crosses throughout the nail biting race against Luna Rossa Prada Pirelli.

With that result, Sir Ben Ainslie’s team won their the fifth race in a row in the Round Robins. Upon finishing the ‘ghost race’ start successfully it took them to 6 points, enough to qualify directly to the PRADA Cup final.

The Italian Challenger of Record fought until the last gybe of the last leg of a race that was the perfect definition of match racing, seeing top speeds exceeding the 50 knot mark for the first time in racing.

If the tension surrounding this Italian/British shoot out for the right to jump straight to the PRADA Cup final wasn’t enough, the weather was about to throw plenty of more stress into the mix.

As the start time arrived, the breeze was shifting back and forth across the race course, preventing the race committee from setting a fair course.

As a series of delays followed, pushing the start back by almost an hour, news then came that INEOS TEAM UK needed to play their ‘delay card’ of 15 minutes as they struggled to repair a problem with the cunningham, one of the key controls for the mainsail.

By the time the race did start at 1720, the breeze was up towards 20 knots at times and still clearly very shifty. In the pre-start and with just a few seconds to go there were the first indications that this would be a closely-fought race.

As they crossed the line, both were at the pin end, INEOS TEAM UK to windward, Luna Rossa Prada Pirelli to leeward. As they headed out towards the left hand side of the course INEOS was first to tack away. Luna Rossa followed shortly afterwards and when the pair came back together on the right hand side of the course they were still neck and neck. Luna Rossa tacked underneath, but was slow to come out of the tack. From here, the close battle continued to the first gate where INEOS rounded just 2 seconds ahead of Luna Rossa.

Drag racing down Leg 2, both were on port tack with Luna Rossa slightly lower and faster. But when they came back together, the Italians had lost out as the British crossed ahead.

At Gate 2 the British lead had increased to 9 seconds as they rounded the left hand mark. Luna Rossa took the right.
The next time they came back together Luna Rossa had taken the lead, the Italians appeared to be in phase with the shifts and were capitalising on it, pulling out more distance. By Gate 3 their lead was 19sec.

But there was plenty more left in this match.

Once again, the pair took opposite marks as they headed down leg 4. When they came back together, this time BRITANNIA had taken distance out of her opponent and by Gate 4 the gap was down to 10sec.

As both boats went around the right hand mark, Luna Rossa headed out to the right while INEOS TEAM UK pulled off a more tricky tack around the mark to split from Luna Rossa who saw the move and tacked to cover.

Both now on starboard, when the British team came back they were now just a boat length apart as INEOS TEAM UK passed just behind them.

From there, Sir Ben Ainslie pushed out to the right. He needed the breeze to swing in his favour to capitalise on the move to the right of the course. Next time they came back together, INEOS TEAM UK was ahead as she crossed the bow of the Italians on starboard. The tables had turned yet again.

From here, just over one leg lay between the British quest to jump to the final and the Italian hopes to keep their fast track to the Prada Cup alive. By the top mark for the last time, Gate 5 there was just one second between the pair as they headed down the final downwind leg.

Once again, they took opposite marks and when they came back together INEOS TEAM UK was on starboard, Luna Rossa Prada Pirelli on port, the British were ahead by no more than a second as both tacticians talked of the left hand side being the better side.

For the next cross into the finish, INEOS TEAM UK was on port but could lay the finish, Luna Rossa Prada Pirelli couldn’t and tried to get INEOS TEAM UK on a port starboard. As they approached the stern of the British boat, Luna Rossa helmsman Jimmy Spithill called a protest as he claimed they had to avoid the give-way boat. The umpires didn’t agree. The Italians had played their last card, it hadn’t worked and Sir Ben Ainslie cut the finish line 33 seconds ahead.

SIR BEN AINSLIE – INEOS TEAM UK Team Principal and Skipper
“That race was one for the fans. Pretty awesome race, great to take part in. Lots of lead changes, neck at neck all the way to the line, credit to the Luna Rossa guys for pushing hard. We had few issues leading into the pre-start as we were missing one of the key settings. The guys did an awesome job getting us around the track in one piece and getting the win.”

JIMMY SPITHILL – Luna Rossa Prada Pirelli – Helmsman
“When we lodged the protest the both of us were doing 45 knots, we had to avoid BRITANNIA so it was a bit surprised that they thought it wasn’t close enough. At the top we didn’t pull off a couple of tacks as we should have, but it was really shifty. A continuous up and down the entire the racetrack and that’s why we saw so many lead changes. It was a good effort from the guys on board, and congratulations to INEOS TEAM UK. We didn’t get the result we wanted but we certainly learnt a lot from that one.”

In recognition of being top round robin qualifier, INEOS TEAM UK's crew was presented a bottle of G.H. Mumm and have been awarded with the PRADA Christmas Race trophy – which was not assigned in December as races were not held due to the lack of wind.

INEOS TEAM UK now has three full weeks to develop the boat and get ready for the next race, whereas Luna Rossa Prada Pirelli have only six days to fine tune their AC75 before the next race against American Magic who are in a race against time to repair their boat and get back to the startline. The Semi-final – the first knockout phase of the PRADA Cup – starts on Friday 29 January and by then the pressure ramps up dramatically.

No races will be held tomorrow.