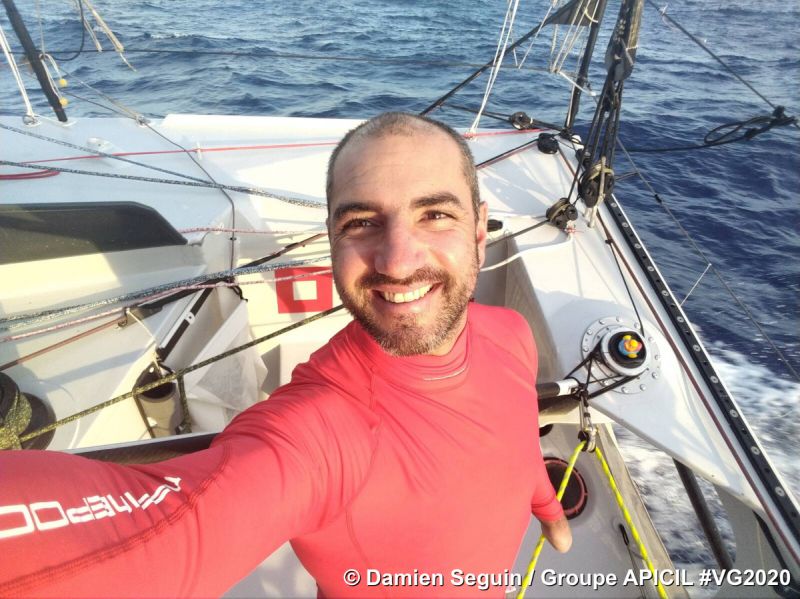 Less than 1000 nautical miles to the finish of the ninth edition of the Vendée Globe in Les Sables d’Olonne and it is still too close to call, not least as the Saint Malo maverick Louis Burton seized the race lead from Charlie Dalin in the late morning today.

Burton, 35, who finished seventh on the last edition of the Vendée Globe was computed to have a lead of just over five nautical miles from the Apvia skipper Dalin. As the leaders split gybes today, Yannick Bestaven (Maître CoQ IV) in fifth was first to opt for a northerly route, seeking to sail up to hook into the stronger winds of a low pressure system. He will sail more miles but could come in to Les Sables d’Olonne faster from the north.

Germany’s Boris Herrmann, in third, gybed around 1000hrs UTC this morning and Burton about 90 minutes later leaving Dalin to sail slightly further east before he too turned Apivia north, finally on to his favoured port gybe. For the first time in nine days or more, the race’s most consistent leader will be able to lift off his fully functioning starboard foil.

Keenly focused and barely masking the obvious mounting stress as he seeks to convert the most consistent, blemish-free race of the current top five to a huge race victory, Dalin said on this morning daily video call, “I am looking forward to getting on to port gybe to use my starboard foil and to make some speeds which reflect the true potential of my boat.”

Bearing in mind he might take line honours but be usurped by one of the two closest skippers who are in possession of time compensations, when he was asked if his destiny was still in his hands he replied, “It is a bit down to what the others do as well. But all I can is sail as well as I can and we will see how it ends. Boris is very close to me but the route is still long, it is still open, but once I am on port tack I will be able to be fast again.”

The suspense on shore – which will be heightened even more on the water – is all the more because there are notable differences in timings and evolution of the key weather features predicted by the main models, as expert Christian Dumard observed today, “The main weather models used by the skippers in this area (GFS, ECMWF and Arpege) do not all give the same results. There is still significant uncertainty for the outcome of this race.”

Charlie Dalin and fourth placed Thomas Ruyant both alter their routes to account for their respective damage to their port foils and others select options and angles best suited to missing or damaged sails.

The lateral separation between Bestaven and Dalin was already over 500 miles this afternoon.

The skipper from La Rochelle who led the race coming back up the South Atlantic by more than 420 miles will sail more miles but spend more time faster in the strong winds and may yet spring a surprise return to the podium, not least as he carries 10hrs 15 mins of redress time.

Dumard concludes, “The wind will ease in the morning of the 27th on the Bay of Biscay with the passage of a small ridge and so it is still very difficult to make predictions on a possible winner or even on a precise ETA on the day of the 27th for the first boats.”

Damien Seguin, skipper of of Groupe APICIL, had elected to communicate less over recent days and focus more on his race. Lying seventh Seguin managed to get around the Azores High with a very clean, smooth route before being one of the first to gybe north. His performance on a relatively unfancied Finot Conq design from 2008, albeit carefully prepped and optimised with advice and help from Jean Le Cam and Yoanne Richomme, has been nothing short of remarkable, a mix of incredible drive and guile.

The multiple Paralympic champion, who was born without a left hand, has long since done enough to be proud of his performance, grinned widely this morning, saying on a dodgy video connection, “No one imagined a boat with a straight daggerboard could be in this position.”

Seguion then revealed he has not had certain downwind sails since he entered the Pacific! “I'm trying to manage as best I can. It's been a month since it’s been like that!”

In the final sprint his objective is sixth or better, not least trying to get ahead of Itallan Giancarlo Pedote who is racing a foiling VPLP-Verdier design which finished fifth on the last race in the hands of Jean Pierre Dick.

Speaking on the English live show today, Leslie Stretch the CEO of Medallia, Pip Hare's sponsor, revealed his delight with the English skipper’s project and the return the his US headquartered Silicon Valley company.

Connecting with 18th placed Hare he chuckled, “What’s next Pip? Let’s get to the end and go shopping for a new boat shall we? Let’s do that!”

Wearing her trademark megawatt smile, Hare responded: “I have learned so much from this race. This always was me going out and establishing where I was. To take this boat and race in the way that I have in this race has just re-affirmed I definitely want to come back in 2024 with a more modern boat and to be at the front of the fleet. There is so much I have learned, there is so much I could do better.

“I love the way the opportunities keep coming up and keep coming up. And now I am struggling because it is straight line sailing and my immediate competition are all foilers. But who would have thought that 75 days in I could still be competing with foiling boats. Every single second of this race has been an amazing opportunity and I am so focused on 2024. It is amazing.”

Alexia Barrier was approaching Cape Horn this afternoon due to round early this evening but despite 40kts gales was becalmed momentarily while Ari Huusela is only 20 miles behind and should round around 90 mins later.