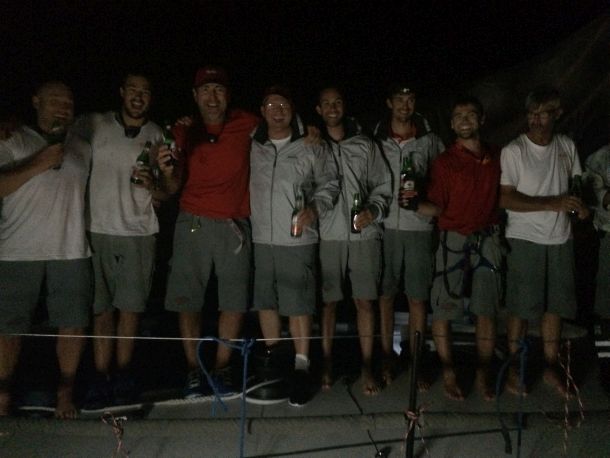 First over the line in the 2015 Wonderful Indonesia Fremantle to Bali Race and Rally at 4 am today (Monday) was Craig Carter’s INDIAN, a Carkeek 47, which convincingly won line honours completing the 1440 nautical mile race in 6 days 18 hours.

The previous line honours record was set in 2013 by Super Sled, a 94 ft maxi yacht which completed the race in 5 days 23 hours 30 minutes 24 seconds.

Indian’s owner and skipper Craig Carter said the final 60 nautical miles were the hardest of the entire race as you can’t wave a magic wand and control the tides. “At one stage we were drifting backwards and there was nothing we could do about it”, said Craig, smiling at the memory.

Indian was stranded just short of the finish line for six hours but eventually the adverse wind and tide conditions relented and she was signaled finished at 4am Monday 25th May 2015 by PRO Trevor Milton and Race Director Rob Thomas who had been on standby for many hours waiting for the moment.

Craig said Indian had an ideal start with great wind conditions for the first two days of the race but unfortunately the wind dropped off and the resulting light conditions reduced their ability to break the race record of 5 days 23 hours 30 minutes 24 seconds set by the late Tony Mitchell’s Super Sled in 2013.

A total of 1607 nautical miles in conditions that tested all aspects of seamanship and boat preparation were sailed by Indian and Craig said the crew, consisting of co-helmsman Paul Eldrid, Darren Palmer, David Ward, John Suriano, Preben Nielsen, Rees Howell, Stephen Locke and Timothy Barton had delivered an excellent and rewarding result for the race.

On arrival in Bali Indian’s co-helmsman Paul Eldrid said there were many challenging times but the crew performed exceedingly well and were all happy to be on the boat.

Throughout the six days of the race Garth Curran’s Walk on the Wild Side has constantly been on the heels of Indian choosing to sail a course that kept her closer to the West Australian coast and then sailing a rhumb line course to Bali.

Race control anticipates Walk on the Wild Side will be the next boat to finish expecting her to cross the finish line late this afternoon (Monday 25).  Veteran skipper Garth Curran currently has Wild Side approximately 88 nautical miles from the finish.

To track the rest of fleet on their progress to Bali follow the race via the Yellow Brick Trackers here: http://yb.tl/f2b2015