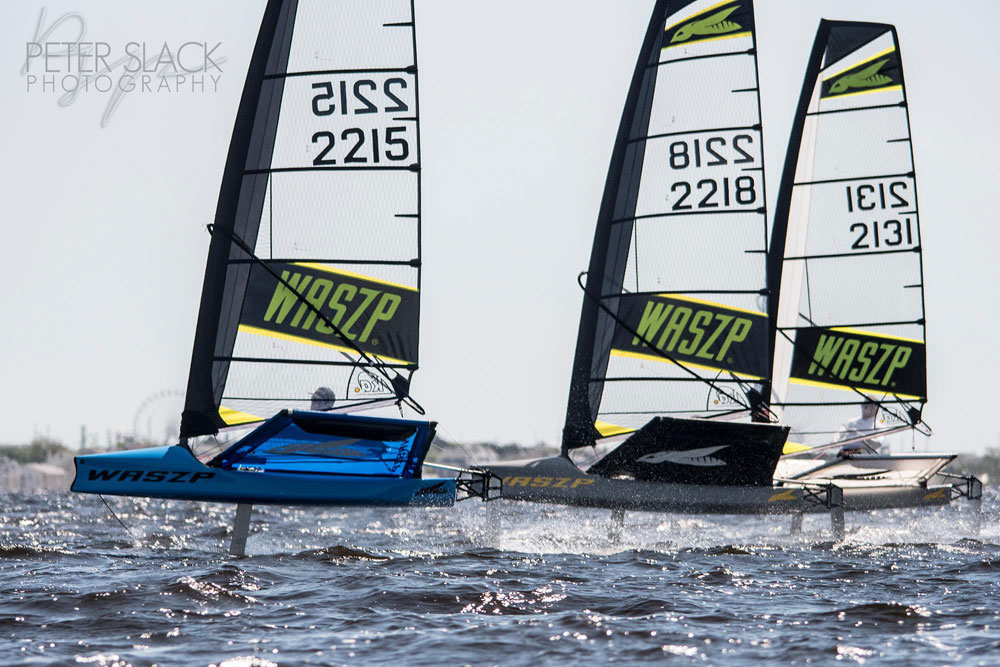 The countdown is on for the inaugural International WASZP Games takes place from 31 July – 5 Aug at host venue Campione, Univela Yacht Club on picturesque Lake Garda in Italy.

It is exciting on so many levels, with the event using some new race formats and a large emphasis on beach culture.

The most popular one design foiler in the world is hosting its inaugural International Championship only one year since production commenced on this product. The WASZP is taking grass roots sailing to new levels around the world.

With over 400 boats shipped around the world, it makes for an incredibly exciting class to be a part of. Fifty plus boats will compete in the WASZP Games, with 15 countries being represented from all corners of the globe.

Some different racing formats are being tested, with the introduction of handicap starting, the same as reverse grid grand prix motorsport, Slalom Racing and GPS Speed Events, to compliment the Championship course racing. This provides an opportunity for all sailors to try their skills at different formats which will suit all sailors.

Entrants include both male and female sailors and an abundance of youth sailors cutting their teeth in a foiling dinghy for the first time and some experienced Olympic and Moth circuit sailors.

There is quality everywhere with a few of the gun Moth sailors trying their hands at the one design boat.

Harry Mighell from Australia would have to be one of the favourites having also played a strong part in the design of the boat. The local Italian Ferringhi brothers are regular Moth sailors and have local knowledge on their side.

Reed Baldridge (USA) who recently won the Atlantic Coast Championship and competed in the Youth Americas Cup is another name to watch out for.

The Kiwis will be strong with a small contingent coming over after their successful Nationals held in March.

Some Olympic sailors will be competing including Pierre Leboucher from France who has campaigned in the 470 class and Sara Winther from New Zealand who regularly raced in her Laser Radial on the Olympic circuit.

The European influence will be large and it is going to be fantastic to see an abundance of young Norwegian sailors from Foiling Norway competing. These young guns are straight out of Optis and aged 13-16 making it so exciting for the class.

Off-the-water it will be no different, with Stand-up-Paddling, Canyoning and Boat Workshops taking place. As well as on-water training being provided by the WASZP Team.

It is the perfect balance of a family holiday, a beach party and some seriously competitive racing. There will be some fantastic social events run post racing each day with an opening ceremony and a WASZP Party, with a live band and sensational food and beverages to party the night away.

For more info on the class go to www.waszp.com