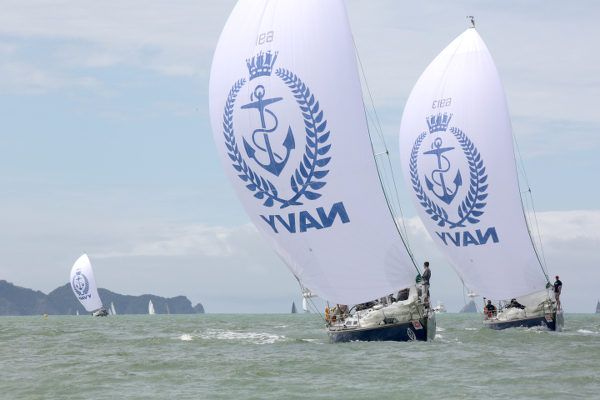 As humidity levels approached one hundred percent in Northland this morning, so too did levels of excitement ahead of the first day of racing in the Bay of Islands Sailing Week regatta.

A hot and muggy start did little to dampen spirits among the crews of nearly 100 boats who gathered on their start lines, many barely visible through the drizzle as they made final preparations for the day's racing.

On the inner courses, the smaller boats had barely 5 knots of south easterly breeze, while further out, the faster boats in A, B and M divisions benefited from a more consistent 8-10 knots, and even some early sunshine, which broke through the clouds just ahead of the first race making for some spectacular viewing on the race course.

Despite being one of the smallest divisions in the event with only four boats competing, the multihulls were some of the most closely watched boats today, as all eyes turned to the two GC32 Class foiling catamarans to see which would be fastest around the cans.

And although Team Vodafone can boast by far the newest of the two boats, it was the benefit of experience that won today, with Team Marwin taking out all three races.

The other two entrants, both Tornado class catamarans, battled bravely through choppy conditions in a class battle of their own, with Arriba pipping Yahoo Serious to a podium position on combined results.

This year's regatta has seen one of the biggest gatherings of 50+ foot boats in New Zealand in some years, making for slick and close and racing in all three of today's races.

Viento took out line honours in race 1, with Kia Kaha and Beau Geste both putting in solid performances to claim 2nd and 3rd. In race 2, a general recall and subsequent black flag start put Ran Tan II out of action as she jumped the gun for a second time. Beau Geste came through to claim first on line in race 2, and again in the third and final of today's races.

Combined results from today currently put Beau Geste out in front on both IRC and PHRF handicaps.

The third and final race was an absolute nail-biter, with just 8 seconds between first and second place. But it was the Royal Navy team, visiting from the UK, who proved that Brittannia really does rule the waves, by claiming victory in all three races. New Zealand's boys and girls put in a valiant effort to sail home in second, leaving the Australians bringing up the rear all day.

The prize giving ceremony will be held at the Bay of Islands Sailing Week Race Village in Opua at 7.30pm on Friday.