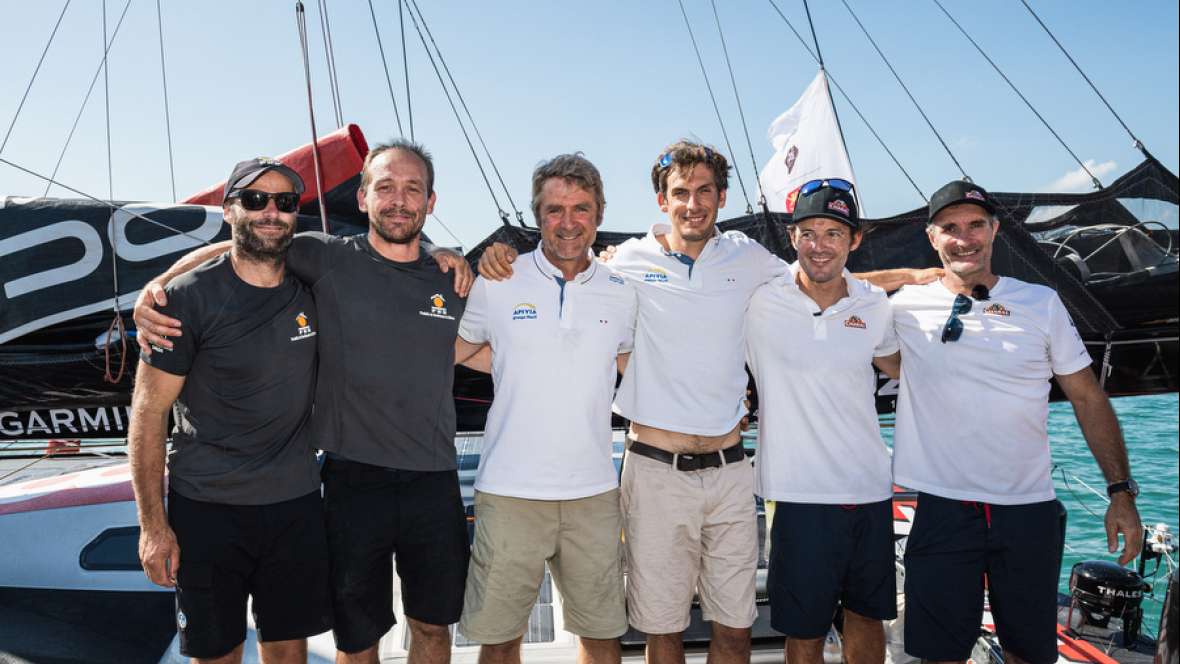 After Apivia coasted to a moonlit victoryin the IMOCA class 15 hours earlier, the Bay of All Saints witnessed one of the closest podium finishes in the history of the Transat Jacques Vabre Normandie Le Havre in glorious sunshine on Sunday. PRB held off Charal to take second place by just six minutes and 18 seconds, little over a mile after both had covered over 5,000 from Le Havre since the start a fortnight ago.

Kévin Escoffier and Nicolas Lunven on their 60ft monohull, PRB, built in 2009, but upgraded with foils in 2018, had the latest-generation foiler and red-hot favourite at the start, Charal,breathing down their necks all the way long the coast of north-east Brazil. The gap closed to just over a mile, but as it went soft – an unstable 6-8 knot westerly, in the approach to the Bay of All Saints, Charal’s advantage evaporated and they could not find a way past.

The 39-year-old Escoffier, from one of the most famous sailing families in France, must have drawn on all of his experience, as a winner of the Volvo Ocean Race last year, the Jules Verne Trophy in 2012 and of the 2005 Transat Jacques Vabre in the Multi50 to hold on.

Not for nothing is this biennial double-handed race heralded as the longest and toughest transatlantic race in the calendar.

For Jérémie Beyou, the winner of this race in 2013, and Christopher Pratt the last three days have marked a great comeback from sixth place and evidence of the speed of their boat, but it was not the podium place they were hoping for.

As close as this chase was, the race will be remembered for their spectacular stall in the Doldrums – one of the most extraordinary in the history of offshore racing.

Charal was 120 miles ahead of Apiviawhen they entered the Doldrums at around 07:30 on November 5. At times they completely stopped as Apivia redirected 50 miles east and flew by, almost without pause. Every time they had looked like finally escaping the clutches of the Inter Tropical Convergence Zone, they were sucked back in.

Apivia’s early acceleration in the trade winds meant that even when Charalwas out of the Doldrums on November 8, they continued to lose miles, peaking at being 302 miles behind at the 19:00 (UTC) ranking on November 8 – a total loss of 422 miles.

America’s Charlie Enright with French co-skipper, Pascal Bidégorry, finished fifth on 11thHour Racingas the boats stacked up in the Bay of All Saints in quick succession. Britain’s Samantha Davies is not far behind in seventh and has closed to within 10 miles of Banque Populaire, but with only 34 miles to the finish.

Kévin Escoffier and Nicolas Lunven, on PRB,have finished second in the IMOCA class of the 14th edition of the Transat Jacques Vabre Normandie Le Havre after crossing the finish line in the Bay of All Saints in Salvador de Bahia, Brazil on Sunday, November 10, 2019 at 16:04:42 (UTC), 14 days, 03 hours 49 minutes and 42 seconds after leaving Le Havre, Normandy, France on Sunday, October 27 at 12:15 (UTC).

Jérémie Beyou and Christopher Pratt, on Charal, have finished third in the IMOCA class of the 14th edition of the Transat Jacques Vabre Normandie Le Havre after crossing the finish line in the Bay of All Saints in Salvador de Bahia, Brazil on Sunday, November 10, 2019 at 16:11:00 (UTC), 14 days, 3 hours 56 minutes and 0 seconds after leaving Le Havre, Normandy, France on Sunday, October 27 at 12:15 (UTC).

In contrast to Charal’s fate in the Doldrums in the IMOCA, Crédit Mutuel has held its healthy lead of 54 miles over Britain’s Sam Goodchild on Leyton.Now in the south-east trade winds, Leyton has carved out a 70-mile lead overAïna Enfance & Avenir. The rest of the Class40s are still stuck in the Doldrums.

“We’re beginning to have the unpleasant feeling of being the butt of a joke that has lasted for three days now, Valentin Gautier said from Banque du Léman, adding that they seen the maxi trimaran, Gitanaon the AIS…doing 18 knots in the Doldrums! “Mostly, we’ve been calming our nerves by saying that it's the same for everyone, except that now, that's not the case! Our friends in the west, who we’ve been hunting, seem to have passed through without much trouble, and us hunters have become the hunted without even realising it.” told this morning in a message from the sea Valentin Gautier aboard Bank of Leman, which also adds to having seen the AIS maxi trimaran Gitana … 18 knots in the Doldrums!

Only 7 Class40s were still sailing in the north-east trade winds today – they still have the Doldrums awaiting them. The fleet stretches for 1,000 miles from Crédit Mutuel to Terre Exotiqueto the south of the Cape Verde islands.

Without their port foil after damaging it in the delivery to Le Havre, Arkea Paprec, in 5th position at the exit of the Doldrums has now suffered the breakage of its starboard foil. They are in ninth and dropping. “We got out of the Doldrums reaching on a port tack, with 16-20 knots of wind, flat sea, so we said ‘these are our conditions, let’s go, it’s time to put our foot to the floor’,” Sébastien Simon said. “We were starting to think the podium was possible but two hours later the foil broke, without warning. So, we’re in a sailing boat without foils. There’s not much left of her.”