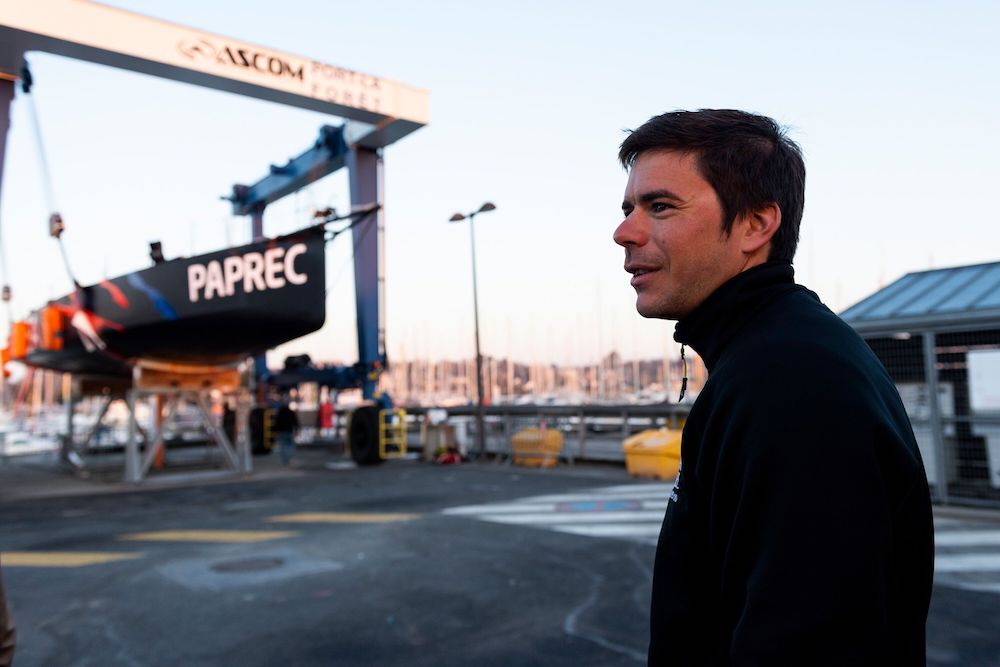 Things are starting to move for Sébastien Simon. On Tuesday 26th February, the IMOCA, PRB, was relaunched displaying the colours of her sponsors, Arkéa and Paprec. It is on this foiler the the winner of the last Solitaire du Figaro will be training, while he awaits the delivery from the yard in late June – early July of his brand new Kouyoumdjian designed boat.

Sébastien Simon and Vincent Riou, the technical director for the project, will shortly be attempting to smash the record for the Columbus Route (Cadiz/San Salvador). In April, Sébastien will be returning home, sailing as if he was alone, before setting off on 8th May at the start of the Bermuda 1000 race. We met up with him to find out more.

Getting used to sailing Vincent Riou’s IMOCA, while you wait for your future IMOCA, Arkéa-Paprec, to be completed, is a luxury…

“It’s the ideal situation being able to sail on an IMOCA immediately. Otherwise, we would have had to wait until July. The Vendée Globe is a big race, which requires a lot of preparation. I still don’t have much experience of IMOCAs and none at all sailing solo. Thanks to these couple of months training on the former PRB, when Arkéa-Paprec is launched, I won’t be in the learning phase, but rather aiming for performance.”

This transition isn’t happening on any old boat. PRB is one of the references in the IMOCA class and since last season, she has been fitted with foils…

“PRB is now around ten years old, but she was ahead of her time. She was upgraded last season with the installation of foils. I have already had an opportunity to sail on her. In particular after the last Route du Rhum, and she feels great. To start off with, she was awe inspiring, then she was amazing and you end up getting used to her. You can get used to anything. She’s a magnificent boat to train on, but also as a sort of lab to test things before my new boat is launched, so that we can run through certain elements, such as the autopilots and sails for example.”

Getting one step ahead

The former skipper of PRB, Vincent Riou, is also your technical director for the Arkéa-Paprec project. That all seems to come together well…

“I have no regrets about my choice. We get on very well together and Vincent is being very kind to me. He is there to help me build a great boat, ensure I get the full potential out of her and to train me. He has taken part in the Vendée Globe four times and won once. He has an exceptional experience and I can learn a lot from him. It’s reassuring to have him alongside me. He supports me, guides me, while leaving me a certain amount of freedom and independence to work on my project.”

Until when will you be training on PRB in the colours of Arkéa-Paprec and what is your programme with this boat?

“We hope to have our first trips this week, on Thursday and Friday. In the initial programme, we had planned to compete in the Barcelona World Race with Vincent Riou. But since the race was cancelled, we needed to come up with an alternative. In March, we will be attempting the Columbus Route record between Cadiz (Spain) and San Salvador (Bahamas). In April, I’ll be sailing her back home as if alone, but with Guillaume Le Brec, who is in charge of performance in the team and Yann Riou, who will take on the role of media man to start to get some pictures. I alone will be in charge on board. Then, there is the Guyader Grand Prix with a crew and I shall be taking part in the Bermuda 1000, sailing 2000 miles alone.

“That will be my first truly solo experience on an IMOCA. I’ll make the most of that to build up my confidence. The aim will be to complete the race without tripping up and hoping that we’ll get a good result after that. Arkéa-Paprec will be launched in late June or early July. By then, I will in theory have sailed two transatlantic races. I’ll be one step ahead of the other sailors who are currently having IMOCA boats built. PRB will return to her original colours and be handed over to her new skipper, Kévin Escoffier, in early August. That means that in July we will in fact have two IMOCAs in the water.”

How far have you got with the construction of your new IMOCA?

“Things are advancing and the boat is starting to take shape, which is encouraging. In late December, the hull was transported to our premises in Port-la-Forêt. Since then, it has been taken out of the mould and the bulkhead compartments are currently being assembled. The deck is being built at the CDK Technologies yard and we’ll shortly be getting our hands on it.

“This is a brand new way of doing things. It is the first time that an IMOCA has been entirely assembled within a team. It’s a huge responsibility, but it means you know exactly what is going on and can follow everything closely and make sure it is all going to schedule. Currently, we have 28 people working on the boat.”

The first major event for the new boat will be the Transat Jacques Vabre, which you are going to race with Vincent Riou. What is your goal?

“Winning, of course. We’ll be sailing double-handed on a boat from the latest generation. Even if before that we will have taken part in the Fastnet Race and the Azimut Challenge, the boat won’t be completely set up as we would like. We’ll do what we can in the time we have at our disposal. There is a lot of competition with probably 32 IMOCAs taking part. But winning is possible and we believe it can be done.”